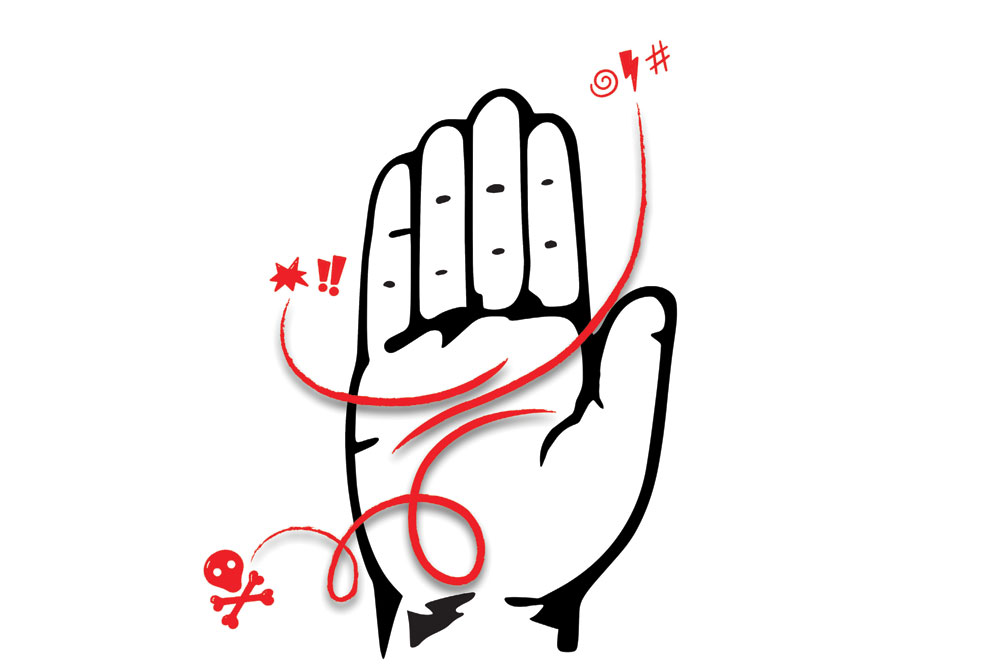 
THE RECENT SERIES OF statements by the senior leadership of Congress must be viewed and interpreted with a sense of historical context and not as isolated utterances. There is an urgent need to understand the institutional thought process of Congress. Salman Khurshid, P Chidambaram, Digvijaya Singh and Mani Shankar Aiyar are not some inconsequential voices in the party; their actions and statements demonstrate and represent the foundations on which the party stands today. In the course of the last seven decades, Congress has carefully cultivated an ideological ecosystem that has spoken in support of successive Congress Governments. Institutions supported and aided by governments both at the Centre and in the states were speaking in one voice when it came to official articulations on Indian history and society.

The love-hate relationship between Congress and the Communist Party has provided an interface of opportune politics for both. A section of the communist leadership even supported Emergency promulgated by Indira Gandhi. It is only laughable that today they rally on saving the idea of the Indian Constitution. The founder of the Bahujan Samaj Party, Kanshi Ram, “slandered” communists as “green snakes hidden in green grass.” While Congress freely indulged in power politics, the communists through multiple intellectual establishments provided the supporting academic architecture. In a nation where the sense of civilisation and culture is omnipresent, it would have required a huge effort by government and the intellectual establishment to generate a distaste towards anything that was Bharatiya in its essence.

Congress is singlehandedly responsible for institutionalising the politics of communalism, appeasement and ‘dynastocracy’ in the country. It is not an exaggeration to attribute it to the letdowns of the vision and imagination of the makers of our Constitution. Men and women who drafted the Constitution of India had a dream. Equality and pursuit of justice were not just slogans but were supposed to be the fundamental prerogatives of politics and governance. When BR Ambedkar said, “On the 26th of January, 1950 we are going to enter into a life of contradictions where we will have equality in politics through the principle of one man and one vote but we will continue to have social and economic inequalities,” he suggested the course for national priorities. When we remember and celebrate Constitution Day, we must attempt to address and confront our collective realities. Where do we stand today? Who is responsible for this decay in institutional thinking that abhors the eternal relevance of our civilisational consciousness?

Even Mahatma Gandhi, who called himself a proud Sanatani Hindu, made a similar remark in one of his last letters before his death wherein he indicated the prevailing spiritual subservience and moral vulnerabilities that we faced on the eve of Independence owing to centuries of colonial oppression. His letter was a reflection of his concern towards the underprivileged. Congress, sadly in quest of perpetuating the legacy of one single individual and later a family, did a colossal disservice to the legacy of Gandhi and Ambedkar. Ambedkar was reduced to just a leader of the depressed classes and later a political commodity to seek votes from Dalits. Gandhi was restricted to Gandhi Jayanti. Ahimsa or non-violence as a tool to address the excesses of colonial rule is the source of one of India’s biggest soft powers. Instead of walking on the pathways revealed by Ambedkar and Gandhi, they were condensed to ceremonies and symbolism. Gandhi devoted his life to fighting against the menace of untouchability. There are multiple recorded instances from Sabarmati Ashram where special initiatives were taken under his supervision to create an inclusive mechanism that treated everybody on an equal footing. He remained a devout Hindu throughout his life and also professed the idea of Sarvodaya that emanated from Sarve Bhavanatu Sukhinah… that loosely translates as “Let all be healthy and happy”. Gandhi said, “[P]olitics devoid of religion is absolute filth.” For him, religion was a value system and the ethos that would provide a solid foundation to our nation.

But as India embarked on its journey as an independent nation, newer challenges came to the fore. The first occasion of appeasement came soon after Independence. Sardar Vallabhbhai Patel, the then home minister, guaranteed that the Somnath temple would be rebuilt and restored to its former glory following India’s independence and the accession of Junagarh state to the Indian Union. Even Gandhi supported and endorsed this idea and went to the extent of suggesting that the people of India must contribute to the process. Jawaharlal Nehru, as pointed out by KM Munshi, was against this idea. In his world, rebuilding the Somnath temple was akin to Hindu revivalism. He wrote a letter to Rajendra Prasad expressing his displeasure: “I confess that I do not like the idea of your associating yourself with a spectacular opening of the Somnath Temple. This is not merely visiting a temple, which can certainly be done by you or anyone else but rather participating in a significant function which unfortunately has a number of implications.” The Somnath temple has a special place among the 12 jyotirlingas spread across the subcontinent. There is absolutely no connection between expression of faith and revivalism.


There is a sense of historical structure to this radicalism in Congress. When P Chidambaram openly questions the wisdom of the judicial process, it must be seen as a sign of the times to come

The uniform civil code was a constitutional commitment. According to Article 44 of the Constitution, “State shall endeavour to provide for its citizens a Uniform Civil Code (UCC) throughout the territory of India.” It simply means a common set of rules governing the citizens of the country with respect to civil matters like marriage, divorce, succession, etcetera. In Volume 7 of the Constituent Assembly Debates, Ambedkar said: “I personally do not understand why religion should be given this vast, expansive jurisdiction so as to cover the whole of life and to prevent the legislature from encroaching upon that field. After all, what are we having this liberty for? We are having this liberty in order to reform our social system, which is so full of inequities, so full of inequalities, discriminations and other things, which conflict with our fundamental rights. It is, therefore, quite impossible for anybody to conceive that the personal law shall be excluded from the jurisdiction of the State.”

However, with the setting up of the All India Muslim Personal Law Board, Indira Gandhi erected an impregnable wall between Muslims and the possibilities of a single common code for the nation. With a single stroke, Indira Gandhi failed the makers of our Constitution with absolutely no resistance at all. This was just the initiation of the process of radicalisation of Congress. The final nail in the coffin was the reversal of the Supreme Court judgment that mandated maintenance for Muslim women who were divorced.

P Puneeth, associate professor of law, Centre for the Study of Law and Governance at Jawaharlal Nehru University, made an important remark in this context: “Mohd. Ahmed Khan v. Shah Bano Begum is one of the landmark decisions of the Supreme Court of India, where it upheld the rights of the divorced Muslim women to claim basic maintenance from her husband under the secular law i.e., section 125 of the Code of Criminal Procedure. It is unfortunate that the uniform application of the secular law came to be opposed on the ground that the same is inconsistent with the personal law of the community. Demands were made for the nullification of the judgment and, what is more unfortunate is that the then government yielded to such unreasonable demands and passed Muslim Women (Protection of Rights on Divorce) Act, 1986. Ironically, by diluting the judgment, the aforesaid Act, in fact, protected the rights of Muslim men to divorce without any obligation to pay for the maintenance of their divorced wives beyond Iddat period. Later, taking advantage of the vagueness in the language of the Act, the apex court, in Daniel Latifi, somehow saved the essence of the judgment rendered in Shah Bano Begum. It was a fine attempt by the apex court to uphold and protect the rights of divorced Muslim women.”

The reversal of the Shah Bano judgment under pressure from fundamentalist forces remains one of the darkest chapters of our constitutional history. And that is why it is important to keep reminding ourselves of the extent to which political parties can go for votes even at the price of compromising the ideals of our Constitution. Not only does this episode speak of pandering but it is also an illustrative example of the political executive breaching judicial authority.

Salman Rushdie’s The Satanic Verses was banned in India in 1988. India became the first country to ban the book, again under the influence of radical forces. This was an insult to the constitutionally guaranteed freedom of speech and expression. Interestingly, the ban was invoked much before the Iranian fatwa that led to bans in other countries. It is imperative for the independent academic establishment to revisit the memories of this embargo on ideas. For the last two decades, Narendra Modi has been subjected to the harshest of criticism in the name of freedom of speech and expression. The double standards of these self-declared defenders of this freedom must also take cue from the ecosystem that gradually eroded the reminiscences of the ban on Satanic Verses.

This systemic radicalisation of Congress is now immune to changing circumstances and has become the institutional default setting. Manmohan Singh, as prime minister, had said in 2007: “Minorities, especially the Muslim minorities, must have the first claim on our national resources.” This statement defies constitutional wisdom premised on equal opportunities, irrespective of caste, gender, religion and region. The first-claim argument, if used with an intention to shelter the historically marginalised sections like the Scheduled Castes and the Scheduled Tribes, would have made more sense, apart from qualifying the test of constitutionality.

Therefore, it is not a matter of surprise when Salman Khurshid makes a preposterous analogy between the idea of Hindutva and terrorist organisations. There is a sense of historical structure to this position of radicalism in Congress and no amount of de-radicalisation can lead to redemption. When Chidambaram openly puts a question mark against the wisdom of the judicial process in the country, it must not be seen as a one-off event but as a sign of the times to come. When the Bharatiya Janata Party (BJP) is making an attempt to shape the electoral discourse around development issues like infrastructure and connectivity, such as the Purvanchal Expressway, the opposition forces have no other option apart from paying obeisance to Muhammad Ali Jinnah to appease a section of minorities purely with an intention to gain political leverage. For long, the people of India have been taken for granted. There is a new hope when the nation realises that anyone with capability and skill can aspire to the Padma awards without proximity to political party offices and Lutyens’ Delhi. It is this renewed sense of optimism that must become a permanent fixture in our politics and not just the politics of polarisation and radicalisation.