Neither Salaam, Nor Bombay

He ran away from home to Bombay and landed the lead in Mira Nair’s Academy award-nominated Salaam Bombay! But after years of looking for another role, any role, he’s back home in Bangalore driving an auto. 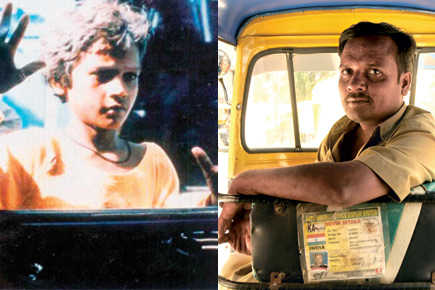 He ran away to Bombay and landed the lead in Salaam Bombay! Now, he’s back home in Bangalore driving an auto.


I ran away to Bombay in 1987 to become a film star. We—two friends and I—took the train from Bangalore Cantonment Railway Station and got into the unreserved compartment. In 24 hours, we were at Victoria Terminus. We got on the train without tickets. Sometimes we sat in the toilet seats, sometimes in the gap between coaches. I don’t remember what had happened at home. I can’t recall the evening before the trip. I think I was enraged—at my family’s poverty, my helplessness, and I don’t know what else. I was 12 years old. I had no idea how long I would be in Bombay. I had no idea of anything.

Ek minute. There’s someone asking for directions. Domlur jaana hai? Take right, then left. Then take the first right. There will be Hotel Shanti Sagar. That’s the place. Okay, thanks.

Sorry. Being an auto-rickshaw driver, means you are the tourist guide to everyone in town. But to come back to my story…

We hung about Wankhede Stadium on ‘D’ Road in Churchgate. One day, a lady volunteer from a social service organisation approached us. She said her people were making a film on street children. “Will you act?” she asked, “You will get Rs 10 per day and meals.” We jumped at it. The film would later be called Salaam Bombay! Soon she became didi to us.

We did amateur drama first. I trained for two months doing acting classes in a school hall. The organisation workers also made us watch movies. My favourite star then was Govinda. I picked up a break dance move or two from him. I heard even he had come up from the streets in Virar. Like me. He looked like a good role-model. Life for a wee while seemed good.

They put us up at a hotel while shooting. But the hotelier said, “No one gives money in the film line to chhokras like you. They are fooling you.” I was new to the city and almost quit the film on hearing that. I told the director and our didi what I heard from the hotel manager. Then the producers of the movie assured us of giving what was due to us. Didi calmed us down. She took us out of the hotel and kept us in her own flat.

While filming, I felt I did not have to ‘act’ at all. It consisted of language, stories and situations that I had already lived through. People called Salaam Bombay! an ‘art film’. But truth is, it wasn’t. It was like my own story. It was the life of India on the streets. It was life that wasn’t different from death, and I had lived it.

Helping me out were co-actors Raghuvir Yadav, Nana Patekar, Anita Kanwar. I learnt that acting means a character honestly ‘reacting’ to a situation. The other person’s moves are a cue to what I have to do. I had to learn all these small things. Even just being myself in front of the camera was an on-the-sets education for me.

See that? No one recalls that I was once the star in a hit movie, a critically acclaimed film, a picture that was India’s official entry for the Oscars. Nobody. Including filmmakers.

Salaam Bombay! released and I don’t need to tell you how it was received. After the shooting, I went back home to Bangalore. My parents were relieved to see me. I’d spent several months away from home. They saw pictures of the shooting and some of us turned out in good clothes for a get-together. They were impressed. So I went back to Bombay. I told them I was not interested in studies. I took them to the cinema to show them the film. They were proud. This time I left home with their blessings. I thought I knew how the film world works. I assumed I would get more roles.

As I came back to Bombay, news of Salaam Bombay! was in several newspapers. It kept getting nominated for some prize or the other, and got some international awards. No one called me for those awards. The only time I went for something was when I was called for the National Award in Delhi.

I trooped in and out of innumerable film studios in Bombay, but got no work. I would go with newspaper cuttings where I was mentioned. On more than one occasion, a junior assistant director saw the paper clippings, saw my photo and asked: “Aaj khana khaya kya?”

Some directors said I could join them as a technician. But nothing clicked. I went down on luck big time. I had so many hopes of becoming something, landing some role. Life didn’t change one bit. I was back to square one.

Sometimes Salaam Bombay! feels like a bad dream—and the movie itself is the bad dream that is real India. To be given fifteen minutes of fame and nothing thereafter is equal to a nightmare. Once the desire for recognition, money, success is stoked, it keeps on burrowing away inside you. I’d glimpsed the glitz of cinema. I saw it as a way out of the street life I had lived. That anxiety to break free of my conditions drove me insane. I think my desperation came in my way. Or, it’s my kismat.

I’m often asked, if cinema wasn’t clicking for me after Salaam Bombay! why didn’t I turn to education? I had no means. True, the proceeds from the film went to the Salaam Baalak Trust which looked after street children. But I was told I was no longer in the requisite age bracket. Plus, I’d already done a well-known film. I was told I wasn’t ‘young enough or old enough’ to be taken care of. I felt like a victim of fame—which was short-lived and got me nowhere. If I had got that education, I’m sure I wouldn’t be driving an auto-rickshaw today.

By the early 1990s, I knew my time was up in Bombay. It hurt so much, I twice tried killing myself. I’m not ashamed to admit it. Once I tried jumping into the sea at Chowpatty beach in Bombay; the other time I tried consuming poison in Bangalore. In 1994, I came back to Bangalore, and by 1996, started riding an auto-rickshaw for a living.

But now I’m okay. We have a large family of brothers and sisters in the south. Plus, I’m married with two kids. They’re small now, but I’m doing well enough to give them an education. They have seen Salaam Bombay! on CD and liked it a lot. Someday, I will put my life story on celluloid. No matter how hard life hits you, one lives on hope of bouncing back.

By the way, I watched Slumdog Millionaire and I don’t think it’s as good as ‘my’ film. The violence in it is not real, and some of the kids are not depicted accurately. Some come across as fools. Street kids are not so easily fooled. Experience wears them down and ages them in a matter of weeks, days, months. If you look at a 12-year-old urchin, you’re looking at the survival skills of a 30-year-old in him. But I loved Rubina, Azhar and the third kid in the movie. I pray my fate doesn’t await them.