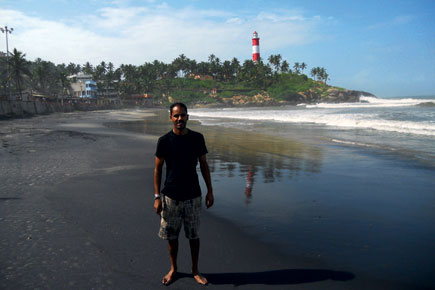 The author, who was adopted by American parents, returns to District Three Hospital in Kottayam where the mother he’s never met gave him birth


Black aviator glasses hid the tears streaming down my cheeks. I walked zombie-like through District Hospital Three in Kottayam, Kerala, where I was born in 1979. I saw the Malayalam script written on the walls. I could not read a single word. I do not know Malayalam. In fact, I do not know any Indian languages at all. Neither do my parents. My parents are not even Indian.

As I was walking through the hospital and around its grounds, so many thoughts came into my head. ‘This is where my life began. This is the closest I will ever be to my origins.’

My name is Adam Joseph Samuel Bryant, and I was born in that Kottayam hospital on 27 June 1979. My birth certificate reads, ‘Joseph, no last name given’.

I do not know who my birth parents are. I never have, and now, I am okay with that.

Like thousands of Indian children, I was born and orphaned immediately, a mere statistic in the demographics of the country. But that is where the similarities cease, and my account begins to sound like something Bollywood itself would be hard pressed to replicate.

I was finally ‘home’. This was my first visit to the hospital of my birth in 32 years of life on this planet. Millions of thoughts flashed through my head, the most recurrent being, ‘My mother gave birth to me here and I don’t know her.’

I spent the first year of my life in a small orphanage called Saint Joseph’s Foundling Home in Trivandrum, Kerala. In 1980, I was adopted by an American couple, David and Robyne Bryant, residing in Madison, Wisconsin, in the United States.

The first time my new parents held me was at Chicago’s O’Hare airport on my arrival as an infant. A year after I joined the Bryant family, my sister Bethany (Meera) became a part of our family. She was, like me, an adopted orphan. Half a decade later, my dad brought my brother, named Benjamin (Dheeraj Kumar), home to Madison as well.

My mom and dad love India, its sights, music, food, traditions, history, and the resilience of its people. They spent time there in the late 1970s in Tamil Nadu and Calcutta (as it was then). I remember the account of their first visit to the Taj Mahal. They said the heat was so oppressive, people were nearly passing out.

I grew up attending Indian cultural shows exhibited by various student associations at University of Madison. My mother cooked Indian food on occasion. We read about Indian history. Every once in a while, we watched a documentary about India. We spent time with other adopted children from India. We even attended a yearly Christmas celebration that featured an Indian Santa Claus. But those occasions were specially scheduled. I was raised without Indian culture on a daily basis.

My feelings about my heritage are mixed. On the one hand, I was proud to be Indian and relished the fact that my story was unique. But like all children, I wanted desperately to fit in. I was an anomaly—rail thin, brown skinned and not a fan of the freezing Wisconsin climate. It was obvious I was out of place there.

While our day-to-day life had the typical drama of any household, the family bonded around a seemingly impossible dream: for all five of us to return to India. My parents wanted us to see the land of our births, to connect with India, and to understand and appreciate our Indian heritage as they did.

In the winter of 2001, that dream came to fruition. The five of us ventured to India, visiting Delhi, Agra, Pune, Mumbai, Kottayam and Trivandrum, even travelling to Tamil Nadu. It was a life-altering trip. I emerged with a new pride in India, and for the first time called myself ‘Indian’ without inhibition.

While in graduate school, I wanted to get an internship overseas. After a Google search in November of 2010, I found an NGO called Dalit Foundation that worked with marginalised, voiceless people in rural India.

On 30 January 2011, my feet touched Indian soil for only the second time since my birth when I landed at Indira Gandhi International Airport in Delhi. I had been looking forward to my homecoming for years and the emotion overwhelmed me.

That’s when the reality of the situation hit me—I was alone in the land of my birth. A young taxi driver greeted me as I arrived, exhausted from the flight, though with adrenaline pulsing through my veins and all five senses overloaded.

As long as I did not say a word, everyone assumed I was native. This caused both excitement and consternation. It was great to feel like an insider. But the moment I spoke, it was obvious that I was indeed a foreigner.

When people realise that I’m Indian yet American, it is always kinda strange. They expect me to know Hindi or at least some Indian language, and have an interesting reaction when they discover that I do not. It’s almost as if they look at me with pity or contempt—sad that my parents did not teach me Hindi. Sometimes they are almost upset because they think I’m shunning the culture by refusing to learn or use the language.

Neither assumption is true.

In a country where the currency is social connections, I was penniless.

Despite my cultural estrangement, I still felt like I belonged. This was, after all, my country of birth.

Those who are not adopted have no trouble tracing their roots. Adoptees don’t have this. Growing up, if we think about it, and I certainly did, I frequently wondered who my birth parents were. After living in Delhi for five months, I spent my last week retracing my roots in Kerala.

So not only had I experienced life as a part of the majority for those five months, but in Kerala I saw people who actually had the same physical characteristics as me. I was staring at people who could have been my family. I saw men who looked like I envision myself looking 20, 30, 40 years from now.

For some of us who are adopted, one of the painful realities is that we probably have blood siblings we don’t know about. As I wandered the streets of Kottayam, after spending three days in Trivandrum, I could not help but wonder if I was passing a brother or sister.

Those are powerful revelations. People who have the luxury of knowing their roots do not realise the freedom that comes with that knowledge. I know that some people want nothing to do with their roots, but that’s a choice they make consciously. For an adopted person, the question is not whether or not they want to ‘own’ their story, but what their story is? Only after hearing or discovering it can we decide whether we want to embrace it or not.

My time in India was full of unanswered questions.

How do I describe walking around in my former hometown? I spent three days in Kottayam, literally just wandering the streets, trying to ‘get in touch’ with my roots. I’m not entirely sure what I expected to find. What emotions was I hoping to feel as I stumbled around Kottayam, drenched in sweat or the monsoon rain? I don’t know, I don’t have an answer.

Yet, I do know that my time in India changed my life. It gave me a new perspective on the land of my birth and its culture. I came to appreciate India and its people in a new way.

Perhaps, no effect on my future was greater than meeting my future wife while I was here. Sasmita worked at Dalit Foundation with me, and has an incredible background story of her own, having been raised in Alligonda, Orissa.

Sasmita was able to unlock India in ways that I could not because of her language skills and knowledge of local culture. Most important, she accepts me without reservation. I’m Indian to her, just raised in America.

One of the first steps we’ll take together in marriage will be returning to the district hospital in Kottayam. She wants to see ‘my first home’.

In a sense, I’ll be beginning again, this time in marriage, at the place where my actual life began.

AJ Bryant is an Indian-born adoptee living in Washington, DC, an adoption blogger and a public speaker. In 2011, he spent five months living in Delhi, where he met his fiancée Sasmita