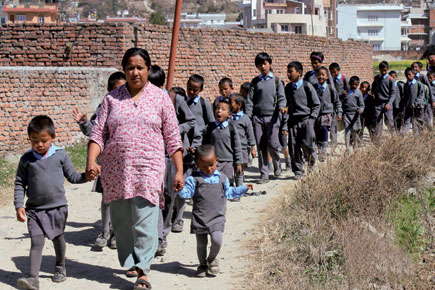 As a child growing up in Kathmandu, I never thought I would do anything but work in my father’s business. My grades in school were never good and I always failed in Mathematics, so I decided to go for a Social Works degree in college just so that I could pass easily. Who knew then that it would be a life-changing experience?

It was during a field trip arranged by my college that I visited a police station in Kathmandu where women arrested on charges such as trafficking, drug offences and murder were held. Most of them had their children living with them. The conditions were terrible. A jail is no place for a child to grow up.

I was really disturbed, but didn’t know what I could do. Then I saw an eight-month-old child sitting next to her mother, accused of the murder of her husband. She grabbed my shawl, and then gave me the sweetest smile I had ever seen. But the smile also seemed to be asking me to save her. I decided then that I had to listen to this child’s voice in my head.

I first started a day-care facility for children. I would pick them up in the morning and drop them back to prison in the evening. Today, I have a day care for younger kids and a residential facility for the older ones. Almost 34 children between the ages of two and 17 live with me. When you have so many children to look after, you can’t escape your responsibility, and want to do the best you can for them. I feel they are like my own children.

These children who grow up in jails are different from other kids. Most of them have witnessed a lot of violence and so have grown up well before their years. When they first come to me, they are usually silent and don’t want to talk to anyone. They don’t even know what freedom means, because many of them have always lived behind bars. Sometimes, they are mature beyond their years. I recently had a new girl admitted to my facility who had seen her mother kill her father. She told the police that she was happy her father was dead as he used to beat her mother up. She realised that it was the only way her mother could lead a better life. And she is just five years old.

The older children know the grave reality of their situations, but most do have the strength to face them. I have a 17-year-old girl whose mother left her because she couldn’t look after her. She knows that her mother couldn’t give her what she needs and harbours no resentment against her.

There is another girl whose tenacity inspires me. She wants to become a lawyer and then fight the case of her mother, who is in jail for trafficking. They all want to study and go on to do great things. One of them also wants to be Miss Nepal. I encourage them to dream as much as they can, and I aim to provide them education so that they can fulfill their dreams.

But I know one thing: if tomorrow the parents of these children come back and try and take them away, I will not let them. I can’t have them taken away from me.

I now have kids from almost 14 jails, and maybe in a few years, I will start some more facilities in different parts of India. Initially, the jail authorities were defiant and didn’t understand what I was trying to do. They used to laugh at my face. But they have seen how these children change once they start going to school and get some love and affection. Now they themselves take the initiative to get children to my place. There’s a lot of responsibility in my hands and I will make sure these kids get the best that life has to offer.

As told to Aastha Atray Banan