An Indian Muslim in Victoria's court tells a larger story 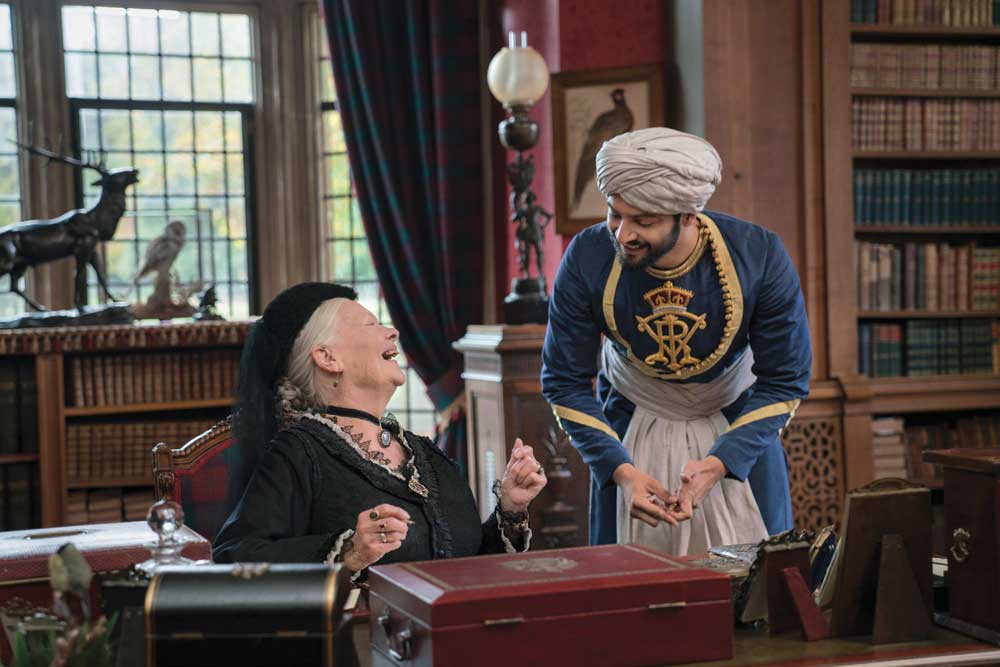 AFTER WATCHING Victoria and Abdul in a London cinema, I came home to find another film on the same subject, Queen Victoria’s Last Love: Abdul Karim, showing on television. Despite the title, this was more a documentary with explanatory commentaries than a romance. Central to both is the unspoken predicament of more than 1.7 billion Muslims who comprise 23 per cent of the world’s population. Their distinctive lifestyle—dress, food and personal laws—sets them apart from other people just as Hafiz Mohammed Abdul Karim’s flamboyant appearance presented an exotic contrast to the royal household.

The young Agra jail clerk (far better looking in reel than in real life) who rose meteorically to become Queen Victoria’s Munshi could be a metaphor for his co-religionists everywhere. I am not talking of either film. They are enjoyable without being particularly perceptive, and even the more cerebral Queen Victoria’s Last Love isn’t interested in asking awkward questions or burdening viewers with the tangled politics that is the story’s vital backdrop. But venturing beyond showbiz to the tale that inspired the Munshi legend, one cannot but wonder whether Karim was the innocent victim of an ancient antagonism that simmered even before Richard the Lionheart fought Saladin in the Holy Land or a fifth columnist cunningly working for Islam’s global triumph.

All we know is that “these Injuns”, as the queen’s secretary, Sir Henry Ponsonby, contemptuously called Karim and his circle, infuriated the royal family and household. Their jealousy cannot be isolated from the rage and resentment that must have fuelled the six bomb attacks Britain has suffered in 2017 which, says the home minister Amber Rudd, is a year “like no other year”. Thirty- six people were killed and scores of others injured, many seriously. Indian communalism has very different roots but since Britain was the determining force in 19th century India, some developments may be linked with thinking in the colonial metropole at a time when William Ewart Gladstone, four times prime minister, notoriously held “there will be no peace in the world” so long as the “accursed book”—the Holy Qur’an—shaped minds.

Religion was politics, and politics religion. Gladstone’s animus flowed from his hostility to the Ottoman empire, especially after the Bulgarian massacres of 1876. If Gladstone denounced Turks, the other premier, Benjamin Disraeli, had to defend them. The great imperialist who made Victoria Empress of India needed the Ottomans to tie down a Russia looking covetously at India. Disraeli’s solicitude for the crumbling Ottoman empire provoked Tsar Nicholas I’s famous “The Bear is dying; you may give him musk, but even musk will not long keep him alive.”

If Karim did poison the queen’s mind, it may have been the defensiveness of a man who was surrounded by bitter enemies in a country that was undermining his co-religionists in Turkey, Egypt, Sudan and Afghanistan

Mamata Banerjee’s August 23rd announcement restricting the exuberance of Biswarjan—immersing images of Durga and her brood—in the Hooghly because Durga Puja and Muharram coincide recalls a similar overlapping 120 years ago when Victoria ordered the viceroy to reschedule Hindu festivals to avoid conflict with Muslim celebrations. A two-judge bench of Calcutta High Court has struck down the Chief Minister’s order. Then, Lord Lansdowne retorted that obeying the queen would be like cancelling Christmas. Victoria also expressed reservations about elected councils not because she opposed this token obeisance to democracy but because she was astutely aware that being in the minority, Muslims would not win many seats. She specifically asked Lansdowne to look after them. The royal household suspected the Munshi of biasing the Queen against Hindus and in favour of Muslims.

Sangh Parivar hearts would have been gladdened to hear courtiers calling Karim and his colleagues “Hindus” because they were from India. He corrected the nomenclature, persuaded the queen to learn Urdu instead of Hindi, and is shown in Victoria and Abdul as being caught out telling Victoria that Hindus mutinied in 1857 while Muslims rallied to the Crown. Whatever the historical basis for this charge, if he did poison the queen’s mind, it may have been the defensiveness of a man who was surrounded by bitter enemies in a country that was undermining his co-religionists in Turkey, Egypt, Sudan and Afghanistan. Victoria, whom her courtiers called “Mrs Karim” behind her back (though this isn’t in either film), was the exception to the zeitgeist. She wrote, spelling and punctuation eccentric as always, ‘I agree with the Mohammedans that duty towards ones Parents… goes before every other but that is not taught as part of religion in Europe.’

Little remains of that respect. An Amnesty International flyer seeks support against a Sudanese judge who has sentenced a pregnant woman to hanging, a Saudi Arab who publicly flogs a blogger every Friday for talking about freedom, and an Iranian official who sentences anyone convicted of adultery to death by stoning. Muslims complain that every time an outrage occurs, they watch the news with trepidation and pray that the suspect is not one of them. This is not because they think terrorists are likely to be Muslim but because when they do happen to be, the mass media whips up hatred through amplified coverage. Some leading British lawyers want special terrorism laws abolished. They argue that the murderers of Lee Rigby, a young soldier whom Islamists butchered, or the popular young Labour MP, Jo Cox, whom a white supremacist stabbed 15 times, should be prosecuted under ordinary criminal law. Terrorism laws only stigmatise Muslims.

In real life, not the films, Abdul Karim seems to have been a plump, unattractive and egotistical charlatan who abused his connections to speculate in property in India

They also claim the Provisional Irish Republican Army and Spain’s Basque separatists committed similar crimes. Myanmar’s militant Buddhist 969 movement or the Buddhist clergy in Sri Lanka could also have been named. In fact, Muslims are said to account for only 2 per cent of the more than 1,000 terrorist attacks in Europe in the past five years. Even if Muslims carried out all the 140,000 terror attacks the world has suffered since 1970, say Muslim spokesmen, that would represent less than 0.00009 per cent of the global Muslim population. Since the Qur’an extols peace and goodwill, it’s not surprising that several Muslims have received the Nobel Peace Prize.

Perhaps the evidence against Muslims demands this defence. The first four British attacks this year—all carefully preplanned attempts at mass murder—were the handiwork of Arabs. The fifth attack wasn’t by but against Muslims by an unemployed white who drove a van into worshippers leaving a mosque after late-night Ramadan prayers. Then came the bucket packed with explosives that burst into a wall of flame on September 15th at the Parsons Green underground station a couple of miles west of where I am writing this. Ahmed Hassan, an18-year-old Iraqi asylum-seeker, is facing trial for attempted murder. Like other young West Asians who have been arrested, Ahmed was staying with an elderly English couple, Ronald and Penelope Jones, aged 88 and 71, whom Queen Elizabeth had decorated for their services to children and families.

Although 30 people were injured at Parsons Green, no one was killed. But the collateral damage may be great if the public attitude hardens. It’s happening already. A sharp rise in anti-Muslim crime was reported from Manchester. Germany’s far right Alternative fur Deutschland party has stormed into parliament for the first time ever because German anger mirrors ultra-nationalist, populist movements elsewhere. India has been familiar since 2014 with tacit official approval of explosions of prejudice. Many Indians see the deportation of the Rohingya without guilt being established as an expression of the same hostility. As the spirited affidavit submitted by Mohammad Salimullah, a Rohingya Muslim seeking asylum, states, the Government’s 2015 notification of groups granted exemption is conspicuous by the absence of Muslims. ‘To exclude Muslim refugees from the Rohingya community in Myanmar that fled persecution is clearly discriminatory.’

Victoria insisted that ‘no political papers of any kind are ever in the Munshi’s hands, even in her presence. He only helps her to read words which she cannot read. He does not read English fluently enough to be able to read anything of importance’

Deportation overlooks the grim evidence of satellite photographs of 214 devastated villages in Myanmar’s Rakhine province where there was once bustling prosperity. Of course, this doesn’t even remotely compare with my childhood memory of the Muslim League’s Direct Action Day in Calcutta with its smell of burning flesh and stench of putrefying carcases when the only movement apart from our vehicle amidst empty streets and smoke-blackened houses was the occasional flapping of the wings of vultures too gorged on dead bodies to do more. But two wrongs never make a right.

It’s a law and order problem for Ms Rudd who is increasing the counter-terrorism budget by 3.5 billion and giving Muslims special protection. But she admits that Britain has to contend with “an onslaught of attacks from Daesh (the Islamic State of Iraq and Syria organisation) trying to radicalise people.” Some Daesh militants believe they are spreading the faith. Others are convinced they are battling demons. The sense of grievance engendered by West Asian, especially Israeli, politics, is compounded by contemporary experience. When the Jones house was raided, the police gave Mojgan Jamali, who lives nearby with her three children, exactly “one minute to get out of the house and get away”. She found it “pretty scary”. Others say the aged Mrs Jones was manhandled.

Queen Victoria was not Victorian. Ahead of her time, she badgered Lord Salisbury, the prime minister, to appoint Rafiuddin Ahmed, a Gray’s Inn barrister and writer for a periodical called Nineteenth Century, ambassador to the Ottoman empire. Rafiuddin was connected to the Muslim Patriotic League and a friend of Karim’s. Victoria also thought he could collect intelligence from Muslims worldwide. Balliol’s great master, Benjamin Jowett, recommended him to Arthur Godley, permanent under-secretary of state at the India Office. Some of her courtiers suspected Karim of passing confidential information to Rafiuddin for the Amir of Afghanistan. There is no indication these fears were well-founded, or that the Munshi was ever indiscreet. Salisbury’s investigation turned up nothing against Rafiuddin. He held high office in Bombay and was knighted in 1932.

In real life (not the films) Karim seems to have been a plump, unattractive and egotistical charlatan who abused his connections to speculate in property in India. But espionage is discounted. Victoria insisted that ‘no political papers of any kind are ever in the Munshi’s hands, even in her presence. He only helps her to read words which she cannot read or merely ordinary submissions on warrants for signature. He does not read English fluently enough to be able to read anything of importance’. His may have been only a marginal role, but a dark skin and exotic garments heightened mistrust. The increasing profusion of beards and burqas in London’s streets adds to that sense of separation which a white Australian woman politician notorious for her racist rantings exploited by turning up in the Senate in Canberra swathed from head to foot in a black burqa. She could have been Karim’s plump, pretty and bejewelled wife or her mother, both shown in burqas in Victoria and Abdul. Criticised for her ‘appalling’ stunt, Pauline Hanson, leader of Australia’s One Nation party, explained she had worn the burqa as part of her push to ban it. Britain’s right-wing UKIP wants it banned. So does Angela Merkel. Switzerland outlawed burqas in July 2016.

Those who wear it cannot but know that this is yet another way of flaunting an identity that is not only different but defiantly so. True to his faith, Karim, who attended the Woking mosque, saw no reason to conform. Things would have been easier for him—and for those around him—if he had.