Making a Deal with Trump

India First and the new America 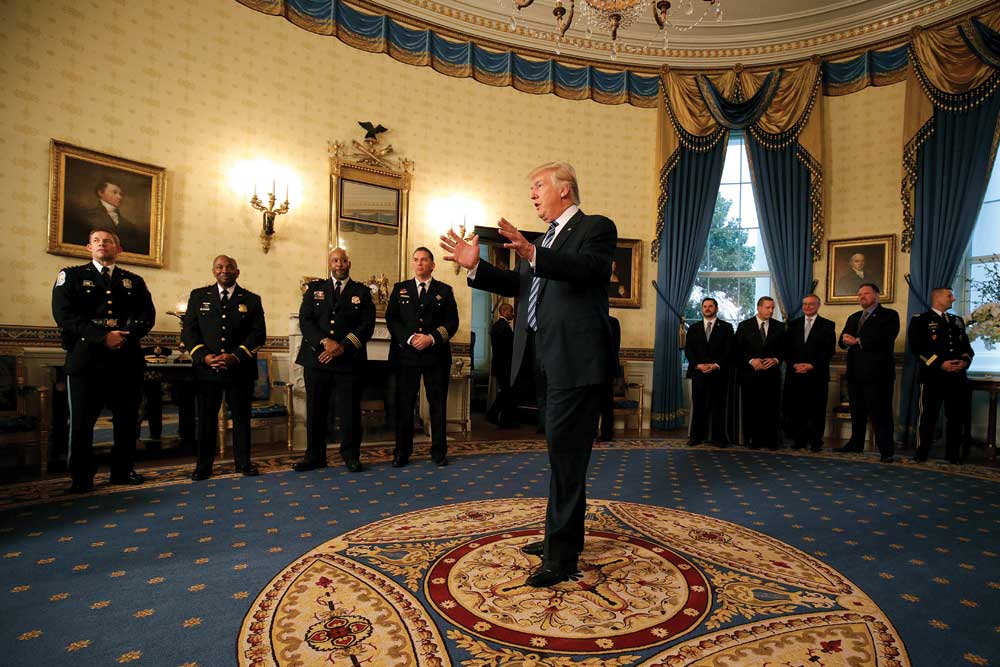 NOW THAT THE over-hyped, over the top, self-referencing change of government celebrations in Washington—carried by the Indian electronic media in the fawning manner the fledging Indian press reported the 1897 festivities commemorating the Diamond Jubilee of Queen Victoria’s reign—have ended, the United States and the world enter gingerly upon the ‘America First’ era promised by President Donald J Trump. There’s much apprehension everywhere, reflected in the iconic ‘Doomsday clock’ published by the venerable Bulletin of Atomic Scientists, which, until now showed three minutes to Midnight (denoting nuclear apocalypse), being advanced half a minute or so.

But the populist Trump, it must be noted, is in his outlook, demeanour, and in his outlier’s political experience and trailblazing journey to the centre of power, not unlike the Indian Prime Minister, Narendra Modi. Trump means to remake the country and the Republican Party in his own image much as Modi has done the Bharatiya Janata Party and (at least the top part of) the Indian Government. Trump trusts his own views, and hopes to translate them into corrective programmes starting with deregulating the economy, just as Modi, relying on his reading of the situation and his own counsel, has shaped India’s policies and taken measures to generate jobs, encourage local industry, and loosen credit flows. But Modi, more risk-averse in reducing the Government’s footprint, is also more humble than Trump. When asked whom he consulted on foreign policy matters, Trump said he found he was “speaking with myself, number one, because I have a very good brain.” It signalled disdain for domain experts and advisory agencies, an attitude that is quintessentially Modi-like as well. Elsewhere, even though similar sounding, there are real differences between Trump’s ‘America First’ and Modi’s ‘India First’ principles, which will cause a rift between the two countries.

‘America First’, as Trump envisions it, is a decisive turning inward by a country fatigued playing globocop, dispirited by the unending drain of national wealth in ‘peace making’ and ‘democracy building’ missions in Iraq and Afghanistan, and victimised (as Trump sees it) by a globalised economy in which America is taken to the cleaners, even as China, ruthlessly manipulating its currency and exploiting the current multilateral trade and investment regimes to America’s detriment, grows wealthier and militarily assertive in Asia. Trump has promised hard-knuckled bargaining on a bilateral basis for more equitable trade agreements, bypassing the existing multilateral forums altogether.

Already, Trump has taken the axe to the Trans-Pacific Partnership; the Asia-Pacific trade channels will be next. China is the target, but India will suffer collateral damage in its limited areas of comparative advantage—the Information Technology and pharma sectors, as Indian companies apprehend. With China ready to fill the global economic space vacated by the US, a stagnating India, dragged down by a moribund government apparatus, will get boxed even more into a corner. Further, following his dismissal of the United Nations as a ‘good time club’, Trump has cancelled the $500 million US contribution to it by President Barack Obama. The Modi Government thus finds itself in a disrupted milieu, and on the outs with the incoming Trump Administration, missing two of its foreign policy crutches: an amenable America and multilateral diplomacy.

‘America First’, as Trump envisions it, is a decisive turning inward by a country fatigued playing globocop, dispirited by the unending drain of national wealth

The ‘India First’ concept was first coined by me and fleshed out in the monthly periodical Seminar in 2002. By a process of osmotic transmission, it reached Narendra Modi in the late 2000s, who gave it a spin and made it his own ideological calling card. As originally conceived and explained to certain senior BJP leaders, ‘India First’ was a reaction to the wrong-headed foreign and military policies in the latter parts of the Narasimha Rao’s and Atal Bihari Vajpayee’s regimes that, in my view, promoted a vine-like clinging to the United States and the West for solutions to the country’s economic and security problems, rather than the country banking on itself, effectively mobilising its own resources, selectively building up India’s strategic hard power, and more nimbly managing the international correlation of forces.

The tendency to outsource security became full blown during Manmohan Singh’s tenure, symbolised by the so-called ‘nuclear civilian cooperation’ deal with the US that, as intended by Washington, has prevented further nuclear testing and frozen Indian nuclear weapons at the low end of the technology curve and, worse, drawn the country into the 1968 Non-Proliferation Treaty net. In the Modi years, ‘India First’ has mutated into a still greater leaning on the US. Consider, for example, the signing of the Logistics Exchange Memorandum of Agreement, which turns over Indian naval and air bases for contingent US military use and pre-positioning of stores, and his ‘Make in India’ programme, which provides foreign suppliers the cover to transfer old assembly lines to produce antiquated military hardware, such as the F-16 fighter aircraft.

IT IS IN this larger context that one has to weigh the possible outcomes of Trump’s policies. Indian reactions have been predictable. With middle-class aspirations in mind, the media has focused on the abolition of the H1B visa track to the coveted ‘green card’ as the big downside of the Trump presidency, even though, starting with Obama’s ‘in-shoring’ policy, Indian IT majors had begun hiring Americans in large numbers and limiting their H1B exposure. Another reaction— that of BJP spokesmen—is to mistakenly conflate Trump’s threat to destroy ‘Islamic terror’ and the Afghan Taliban with the US help in eliminating the various troublesome Lashkars active in Pakistan. In a similar vein, to expect that Trump’s harsh words for China will mean military pressure on Beijing, which could benefit India, is to discount the leverage its economic interlinks with and cross-holdings in America provide this Asian country. Should the situation get hot, Trump will expect US’s Asian allies and partners—as he does European states fearful of an aggressive Russia—to protect their interests the best they can. Meanwhile, Trump’s closest European friend, other than Nicholas Farage of Brexit fame, is President Vladimir Putin, to cement relations with whom Trump will lift the US sanctions imposed on Russia.

Trump has evinced an interest in brokering a Kashmir deal. Islamabad has jumped at the chance to drag the US into the melee; New Delhi will demur

To complicate matters, New Delhi, in its eagerness to ‘diversify’ its military supply sources, has distanced itself from Russia at the worst possible time, particularly as a helpful Kremlin would have been invaluable in offsetting China’s military strength. Indeed, Trump would more easily be persuaded about an informal concert of India, Russia and the US to deter and contain China, rather than get the US involved in shoring up America’s treaty allies and possibly into a direct fight with China.

Yet another response by the Indian media, habituated to portraying every small achievement by NRIs as earth-shaking events, is to laud Trump for appointing Indian-origin Americans to high positions (Nikki Haley as US Ambassador to a diminished UN, Ajit Pai as head of the Federal Communications Commission, etcetera) and to read a deep store of US goodwill for India in these appointments.

The many real downside aspects are thus missed. Trump sees himself as an incomparable negotiator, his hard line deal-making method stressing all take and no give. In practice, this will result in the bullying of friendly states, including India. Were New Delhi, for instance, to suggest a tradeoff between India’s buys of high-value US armaments and Washington’s easing off on the H1B issue, say, or conserving some other Indian interest, the access to the lucrative US market will be alluded to by way of sealing a one-way deal. More worrisome still, in between professing his love for ‘Hindus’ and labelling everything Pakistani ‘fantastic’, Trump has evinced an interest in brokering a Kashmir deal. Islamabad has jumped at the chance to drag the US into the melee; New Delhi will demur. Faced with a receptive Pakistan, a resisting India, and the prospective loss of face (and possibly the Nobel Peace Prize to match his predecessor Obama’s), a vindictive Trump, of which there’s ample evidence, may go ballistic, his ire erupting in hurtful diplomatic actions. What’s to stop him, say, exhuming the plebiscite option to resolve the Kashmir dispute under UN Security Council Resolution 47?

If the above is viewed as alarmist speculation, consider that the person regarded as most able to inject sanity into the Trump Cabinet, is called ‘Mad Dog’, as in General James ‘Mad Dog’ Mattis, the US Defense Secretary. As a former head of the US Central Command, Mattis has dealt extensively with the Pakistan army and appreciates its utility in advancing US interests in a region where America finds itself bogged down. To ensure a smooth relationship with Islamabad, he would happily revert to the policy of alerting General Headquarters, Rawalpindi (GHQR), about Indian plans for ‘surgical strikes’ or other operations in Pakistan- occupied Kashmir, as happened in the past when India, jointly with Israel, had planned in 1982 to bomb the nuclear complex in Kahuta and a solo IAF mission two years later, both aiming for preemptive strikes before the Pakistani nuclear programme had reached the weapons threshold.

And finally, a warning for Modi: as a self-confessed ‘germaphobe’, Trump will not tolerate the Prime Minister’s hugs and, in meetings, will keep Modi at arm’s length, perhaps, symbolically describing the arc of the evolving US attitude towards India.