The Redundancy of Anti-Americanism 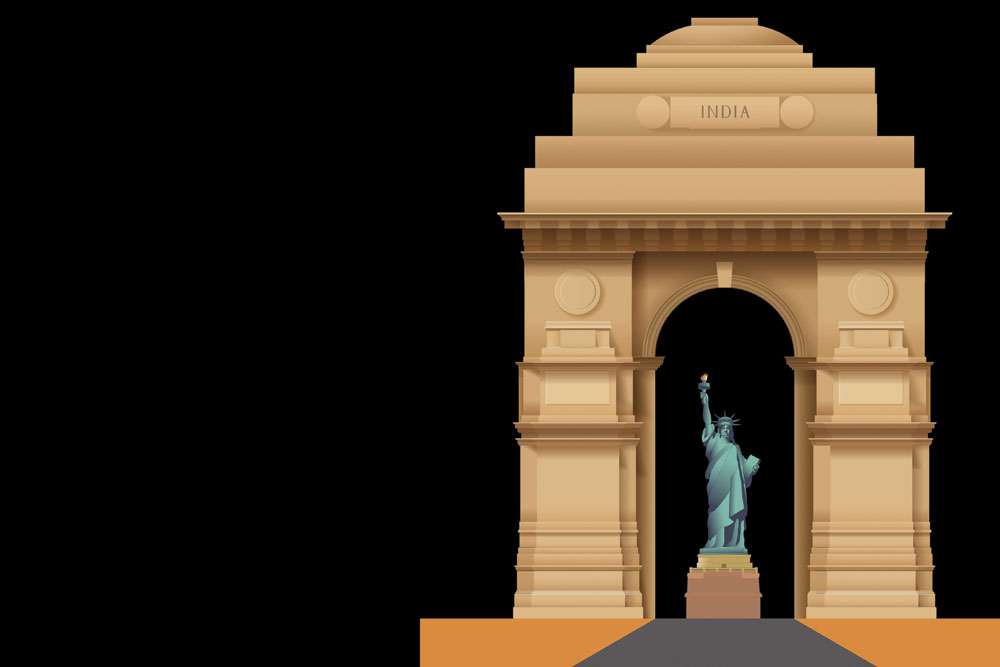 
IF THE United States of America has always been a country in the making, where any one, homegrown or immigrant, could carve out his space, it was exemplified in the story of The Godfather. Even for gangsters, so long as they had ambition, drive and a code of capitalist ethics, the country would create endless opportunities. The Godfather is an American story of Italians, an immigrant community that shaped and got shaped by the land. It should ordinarily have no resonance for a society like India, especially in the time when the story is set. The book was written in 1969. The movie came out in 1972. India was a backwater of the world, struggling with caste, poverty, emasculated kings and youths in awe of Che Guevara. But within three years of the movie being released in the US, it had found its own Hindi avatar. Feroz Khan made Dharmatma, which shamelessly took all the plotlines of the Godfather, and turned it into a snazzy Bollywood spectacle with songs and melodrama. The public lapped it up. Since then the Godfather has been an enduring shadow for Indian filmmakers. There decades later, Ram Gopal Varma was still milking the plot to make Sarkar. And it filtered deep.

Every regional film industry has its own version of the Godfather. The movie touched India because Americanism had grabbed the world.

This has been the trend since at least the end of World War I, when the American century truly began and the US became the torchbearer of capitalism as the European colonial empires disbanded. Take any Indian factory and you can trace its operations back to the American car company Ford, which in 1913 made assembly line production the fundamental optimisation between man and machine until robots arrived. It was also a time that American banks rewrote the script of finance as the engine of big business, which would create multinationals that didn’t need to use force to create markets, just products that made life easier and marketing. On paper, India might have sworn to socialism for much of its early independent history but America was wealth and comfort, glamour and skin, and who doesn’t want all of those? It was everything that India told itself shouldn’t matter to a good society while desperately craving it. Between the US and the Soviet Union, India remained in pseudo isolation, seemingly trying to create a country removed from superpowers and failing miserably by taking the worst of both worlds. It threw out the emblems of America like Coca Cola and IBM and tried to put a lid on consumerism that seethed like a bubbling volcano waiting to burst. When the balance of payments crisis forced liberalisation, the Indian embrace of Americanisation was with unbridled greedy enthusiasm.


America was wealth and comfort, glamour and skin, and who doesn’t want all of those? It was everything that india told itself shouldn’t matter to a good society while desperately craving it

Look at where we are today, at our own person, the things that we carry on us. The credit card, first made in America. The smartphone, an American arrival. The apps in it, innovated first in America. The online store of all those apps, either from Apple or Google, both American companies. The jeans you wear, first made in America 150 years ago. The fashion of those jeans, the tears and the rips, from trends begun there. The WhatsApp chats that now encircle your lives; the Facebook friends that make up your online club; the Instagram images that you salivate over; the Twitter posts that feed your politics; the iPhone that, if you are rich and want to be seen rich, you must be holding in your hand with those sticks protruding out of your ear lobes—all emanating from American shores. And even if you have a Korean or Chinese phone, the Android operating system in it is from Google. The language that your children are speaking on those phones to each other—cool, dude, babe, hashtag, wtf…words that first rolled off American tongues and fingers.

The British weaved English into India, making it easy for America to easily enter and then expand in its consciousness, an effect of what Matthew Engel wrote in his book That’s the Way it Crumbles: The American Conquest of English: ‘The United States has now become the chief source of new vocabulary because its technological and cultural dominance has become overwhelming. The technology alone would not be enough; it is the cultural sway that really matters. The consequences of this are felt across the world, not just in Britain, and not just in countries where English is the primary language.’ Among the conditions he listed for the arrival of this phenomenon were: ‘1. The emergence of English as the unchallenged global language, a role once envisaged for the artificial constructions of Esperanto or Volapük. 2. The infiltration of English words into other, less robust, languages. C’est cool, n’est-ce pas? Not necessarily. 3. The ongoing takeover by the dominant form of English—American English—of all other variants, not just British but also Australian, Canadian, Indian, Singaporean, wherever.’

An article in the online magazine Scroll by its Reader’s Editor on why American English became part of everyday usage in India delved deeper into the specifics here. It said: ‘Spellings are changing: “color” for “colour”, “program” for “programme”, “fulfill” for “fulfil” and hundreds more. Usage too has changed: “sweets” have become “candy”, in polite circles “washroom” has replaced “lavatory” and it is supposed to be more modern to ask for a “check” in a restaurant than the plain old “bill”. (Note, by the way, that the bank “cheque” is on its way to becoming a “check”.) Nouns as verbs seem more common in US English and are entering our usage: “impacted”, “actioned” and other such noun-verbs, which make the purists squirm.’ One of the main reasons it gave for the takeover was that material on the internet is predominantly US English and therefore Indians had begun to imbibe it as a matter of course. But it is not just the written word that Indians mimic. Who does not know someone who went for a short spell to the US, perhaps for an education course or work, and returned after a couple of years with a twang on their tongue? And who does not know someone who didn’t even go there and speaks like that?

A CULTURE encroaches on another through force, or in the absence of that, mimesis or voluntary imitation. Americanism also entered India through pop culture icons. If you are old enough, you will remember when the dancer Prabhu Deva first burst on the national scene with a body that was as if made from rubber twisting from joints god created only for him. The number of teens who mimicked him, especially in the south, were innumerable, unfurling a whole culture of dance. Who did Prabhu Deva himself draw inspiration from? Michael Jackson. He would say in an interview to MidDay in 2009:

“Michael Jackson is the reason I am where I am today. I owe all my dreams to him.” He was hardly an outlier. Three years ago, when Tiger Shroff played a dancer who teaches the art to a gangster in a movie called Munna Michael, it was again an Indian paean to Jackson. Indians have had a steady stream of such American pop culture icons for veneration as if it were the most natural thing to do. From Sylvester Stallone to Taylor Swift, every generation has found Americans to idolise. If you were someone older who was interested in money, there was Warren Buffett, the chairman of Berkshire Hathaway who has a cult following here among stock investors.

Americanisation has worked well for both countries. India has not ended up as a vassal. It is not dominated culturally. And mimicking a culture on your own terms can be a good thing for all concerned

Commerce was also the engine of Americanisation. In the 1980s and 1990s, body shopping companies like Infosys began to take young Indian men as cheap labour to the US and lit the information technology boom here. The trickle became a flood and, though, most stayed back and settled, their families and friends had all been co-opted into the idea of what America represented at its core—opportunity. India no longer looked warily at it. The history of the last 30 years is an acceptance of American culture with some tweaking to retain Indian mores. Like McDonalds, a brand name that is among the most identified with America. It first came to India in 1995 and is now a household name. Even small towns have seen outlets open up and there are now over 300 of them. It has changed its menu in keeping with Indian sensitivities. Beef and pork are completely absent, with chicken, which has no religion to protect it, being the mainstay. McDonalds also has ultra-cheap vegetarian alternatives. But what it brings in the American experience is in the standardisation—the service and food is the same no matter which outlet you go to. After McDonalds, there has been a large number of fast food brands like Kentucky Fried Chicken or Burger King that have become regular haunts for Indians. And they have Indian copycats.

Americanisation was initially met with protests but these have been with decreasing intensity and frequency. That is how it will be for the near future too, now that India and the US have been forced into a political embrace because of the common threat of China. It has worked well for both countries. When Uber, an American company, comes to take over a slice of Indian transport, it also triggers and runs against the homegrown Ola. Unlike the trap that other countries have fallen into, India has not ended up as a vassal. It is not dominated culturally. And mimicking a culture on your own terms can be a good thing for all concerned. Unless you dispute the idea of materialism itself, but that is a debate whose time is long past.