When Ajit Doval hit the burning streets of Delhi 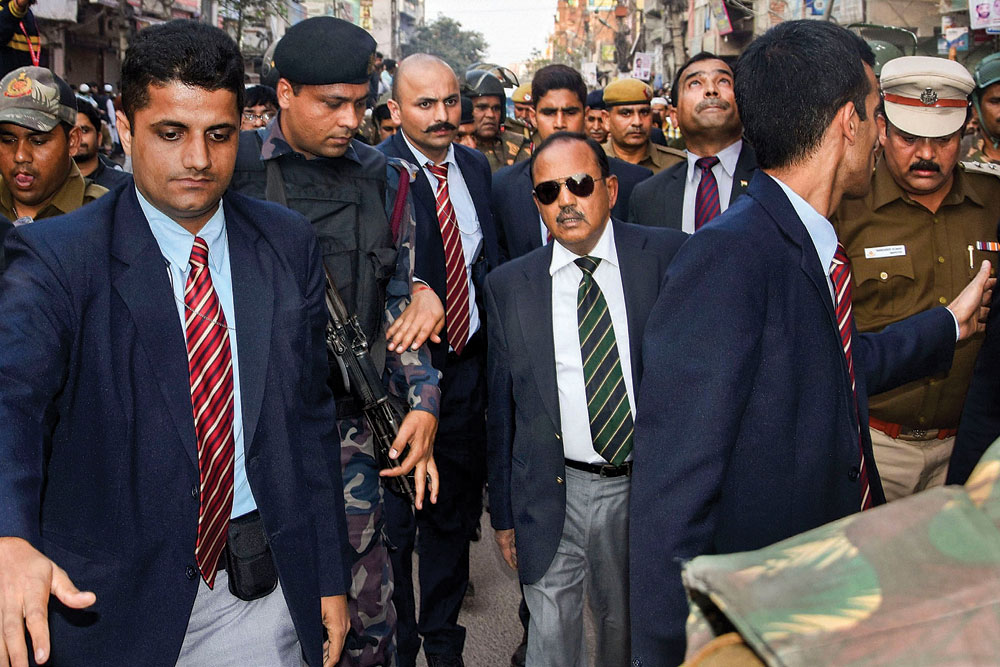 
THE IMAGE OF A GIRL with just her eyes visible under the burqa, venting her fear and angst before National Security Adviser (NSA) Ajit Doval, his eyes indiscernible behind dark glasses, may remain unforgotten for a long time. His words and gestures spell out his mission—to bring normalcy to violence-hit parts of Delhi and instil confidence in people so that peace returns. As he walks through the streets, in a dark blue jacket and striped tie, flanked by police officials, he assures the locals: “Inshallah, there will be complete peace here.” He pats a middle-aged man on his shoulder, reassuring him that security forces were there to protect people; he tells an agitated old woman, “Aman bana kar rakhiye (ensure there is peace)”; he gives his “word of honour” to the worried girl that everyone will be safe.

When the girl, a postgraduate student of political science, alleges that the police were not doing their job, he replies, “They will.” On February 25th, just as US President Donald Trump wound up his visit, partly eclipsed by the violence in a part of the capital, the NSA was given charge of the situation. “I am here on the orders of the Prime Minister and the Home Minister. We want peace here,” he told reporters. Doval, who had spent seven years under cover in Pakistan as a local Muslim, blended Urdu and Hindi, as he reached out to the residents of the areas, where clashes over the Citizenship Amendment Act (CAA) left 38 dead and over 200 injured at the time of going to press.

“My message is that everyone who loves their country also loves their society and their neighbour. Everyone should live in love and harmony with others,” he says, blaming the violence on a “few criminals”. Just as he tries to regain people’s trust in the man in uniform, a contingent of paramilitary forces, including Border Security Force (BSF), is rushed to the violence-hit areas and police patrolling intensified. Doval was present at all the behind-the-scenes meetings held to assess the situation but it was only when the violence went out of control that he was asked to take charge, a move seen as a wake-up call for the Delhi Police. The same day, SN Srivastava was drawn from the Central Reserve Police Force (CRPF), where he was Special Director General (Training), and appointed Special Commissioner of Delhi Police. Just before midnight, Doval went to the office of the DCP (North East) in Seelampur and discussed the plan of action with Srivastava, Special Commissioner of Police (Crime) Satish Golcha and Deputy Commissioner of Police (North East Delhi) Ved Prakash Surya. Then he visited the violence-hit Seelampur, Jafrabad, Maujpur and Gokulpuri Chowk areas.

This is not the first time the NSA, generally a behind-the-scenes operator, has been deputed on the ground to not only micromanage internal security matters but also connect with locals in sensitive areas. In August last year, after the abrogation of Article 370, which accorded special status to Jammu and Kashmir, Doval, wearing a casual jacket, was seen interacting with people and relishing street food in the tense streets of Kashmir where shops were shuttered. He spoke to the locals— from shepherds to policemen— in various places across the Valley, where he spent 11 days. He tried to raise the morale of the security personnel and soothe people’s frayed nerves, saying “Everything will be fine. Your safety is our responsibility.” Much like he has done in northeast Delhi.

“Kashmir is different. It has a political context and many angles and so sending an empowered person like Doval is justified. But should it fall on the country’s NSA to micromanage an abject failure and collapse of the local law and order machinery that allowed the situation to drift, whether by design or accident, it reflects poorly on the intent and capability of the Government to ensure the rule of law. At another level, it is either symptomatic of an overworked NSA or the centralisation of authority, or worse, perhaps both,” says Javed Iqbal Shah, political analyst and ex-husband of former Chief Minister Mehbooba Mufti.

Among the places Doval visited in Kashmir was Shopian, which had witnessed a fierce agitation following the killing of Hizbul Mujahideen commander Burhan Wani in July 2016. His strategy was aimed at preventing any loss of life in the aftermath of the Government’s move. The Narendra Modi Government, which had appointed Doval as NSA with the rank of Minister of State when it first came to power in 2014, had taken an iron-fisted approach to dealing with terrorists—foreign and local—a roadmap that also led to concerns about alienation. In 2019, when Modi returned to power, Doval was again appointed NSA, a position which was upgraded to Cabinet rank, reinforcing the faith the Prime Minister has in him.

Doval was also instrumental in organising the visit of a delegation of parliamentarians from abroad to Srinagar after the abrogation of Article 370. He still keeps an eye on the law and order situation in Kashmir on a daily basis from Delhi. Just before the abrogation of Article 370, a promise made by the BJP in its election manifesto, Doval had visited the Valley to assess the law and order situation there. He kept it a closely guarded secret and visited the Amarnath cave to send the message that he was there to review security arrangements for the yatra.

Doval is known to set aside hierarchies, taking charge of police stations himself at times, directly talking to Station House Officers and also bypassing officers. His ultra-nationalist approach is in sync with that of the Modi regime, which has made it one of its poll planks. That he believed in ‘proactive’ retaliation against Pakistan, which required ‘political will’, was apparent from his opinions even before 2014. He is believed to have played a crucial role in planning the airstrike on a Jaish-e-Mohammed camp in Pakistan’s Balakot in retaliation against the Pulwama terror attack on security forces in Kashmir.

Doval, who has a Master’s degree in economics, can quote from the scriptures. His ability to remember details helped him in his guises as a spy when he could not take notes. He joined the Indian Police Service in 1968 from the Kerala cadre and moved to the Intelligence Bureau (IB) in 1972. Four years after he retired as Director of IB, he had become founder director of the Vivekananda International Foundation in 2009. As of now, the hard-boiled spy is busy bringing peace in northeast Delhi saying: “Now I am here.”