Modi, Ram and the Temple

It was as if political Hinduism’s first citizen wanted to liberate Ram from the aggressions and grievances of Hindutva, and dedicate him to the nation 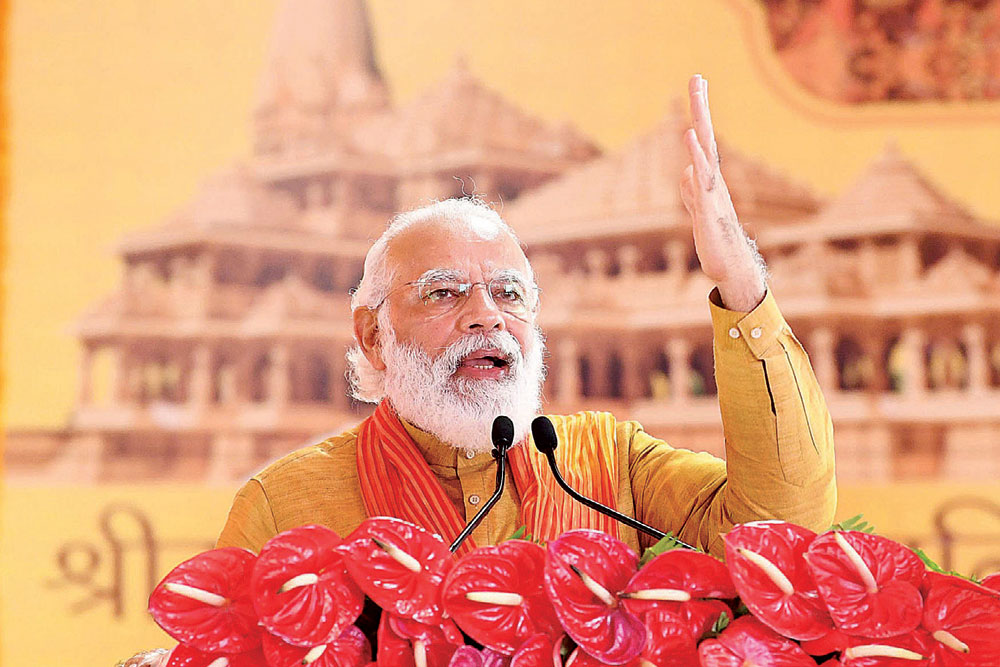 
THESE ARE THE times when we need the mercy of gods and the prayers of the living. United by fear, and set apart by the love for life, we still wait for benevolence. In the city of Ayodhya, where in the epic imagination lived and reigned the ideal man and the model king, the prayers that swayed the passions and politics of India for decades were fulfilled on a Wednesday noon. It was a day when one man’s pilgrimage would join the culmination of a displaced deity’s epochal journey through the minds and courtrooms of India. As a piece of sacred land was dedicated to a god who returned home amidst Sanskrit chants and flower offerings, the pilgrim sat there facing the designated space where the first stone of the temple will be laid, as the chosen redeemer of a pledge to which his own power is indebted. That moment, for Narendra Modi, marked a passage to a future he hoped would be more liberating than lacerating, more reconciling than deconstructive, perhaps as much as it marked a god’s turn to withdraw from the battles of the mortals. The most resonant invocation came from Modi, now maskless in front of the mike, revealing his overgrown hair and beard in white adding customary contrast to the starker colours of his kurta and scarf and of the general atmospherics, as if he just stepped out of a framed pantheon of saints for the occasion: “Ram is within all, Ram is for all.”

Nearly three decades ago, Ayodhya was not an ideal place for gods and kings. It was the site where faith rearmed by politics announced its triumph by an act of profanity that shook the foundations of India’s secular ethos that till then incorporated the idea of the nation and the tolerant attitudes of religions in spite of the enforced ideals of the socialist era. On demolition day, on the debris of a mosque with a backstory of invasion and cultural vandalism stood the foot soldiers of aggrieved Hindu nationalism, which itself heralded the shattering finale of the long march of Indian politics’ only charioteer who would eventually miss the destination he dreamed of all along. Ayodhya 1992 was an end and a beginning. The first notations of a life-changing shift in the politics of India were written in the detritus of a different India where bad memories had never been erased with such fury. India began anew, for better or worse.


That moment in Ayodhya, for Narendra Modi, marked a passage to a future he hoped would be more liberating than lacerating, more reconciling than deconstructive, perhaps as much as it marked a god’s turn to withdraw from the battles of the mortals

Between Ayodhya 1992 and Ayodhya 2020, India amplified the sighs, struggles and assertion of nationhood.

Atal Bihari Vajpayee in power, as India’s first Prime Minister without a Congress ancestry, was the prologue. Even though it was the spirit of Ayodhya that brought him to power, he was not the face of masculine nationalism or resurgent Hindutva. It was the poetics of moderation, not the politics of angry gods, that set him apart as a reconciler in office and a raconteur on the stump. In retrospect, he was a pause, a calm interlude, in the Right’s conversation with power. Modi changed everything, and it must be said again that he came to Delhi not on a chariot but on a promise of modernisation. When he campaigned for India, the recurring T-word was not temple but toilet (the first hint of Swachh Bharat). That was not an omission, or an instance of caution. There was no need for him to stress something that was the very core of his political being, and the edifying imagery of his belief system. To reclaim what was his existential identity as a Hindu nationalist, he felt no need to sloganise, or to climb on to a chariot. To reassure India that he was the new nation builder, it only required a retelling of his record as an administration wizard in Gandhinagar. The twin planks on which he sought India’s mandate were a Congress-free India and a secure future—the story of Ram’s homelessness was too familiar to merit a retelling.

On August 5th in Ayodhya, the Modi who prostrated before Ram Lalla, did the multiple offerings and circled the sacred fire as the priests sang hymns to gods and goddesses including Bharat Mata, was a man with a political mandate bigger than 2014. On that December day in Ayodhya in 1992, it was hate and manic nihilism that reclaimed a god, and jubilation was followed by fear. On August 5th, there was no political theatre of the triumphant as Modi launched the construction of the Ram temple. There was a pronounced sense of understatement. A house for Ram had the legitimacy of the Constitution, which made August 5th not the concluding chapter of December 6th but a civilisational correction. And Modi, for his part, struck a fine balance between the pilgrim and the Prime Minister. He didn’t say the word Hindu in his speech; maybe there was no need, as there was no need in 2014 for him to utter the word temple. Even when he spoke about Ramrajya, it was Gandhi’s version that he wanted to share on what he said was “the day of liberation.” The obvious was left out; it seemed political Hinduism’s first citizen wanted to liberate Ram from the aggressions and grievances of Hindutva, and dedicate him to the nation.

Power hypnotises those who are prone to the fantasies of glory, and, as told by Valmiki, the story of Ram is all about the idealisation of the human and the humanisation of power

The modern Hindu, said Vivekananda, needs to “de-hypnotise” himself. “The way to do that is found in your own sacred books. Teach yourself, teach everyone his real nature, call upon the sleeping soul and see how it awakes. Power will come, glory will come, goodness will come, purity will come, and everything that is excellent will come, when this sleeping soul is roused to self-conscious activity.” Power hypnotises those who are prone to the fantasies of glory, and, as told by Valmiki, the story of Ram is all about the idealisation of the human and the humanisation of power. A temple for such a god could also become a constant reminder for anyone, Hindu or not, who aspires to be a Perfect Man—or a Near Perfect Ruler.