Are three weeks enough for a comprehensive victory over the pandemic? 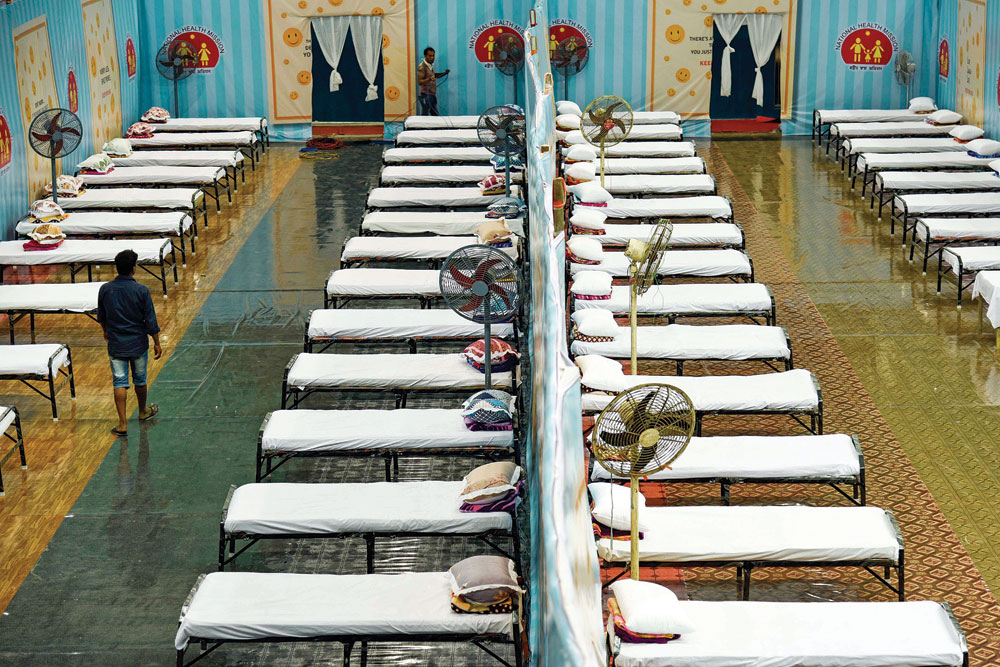 
OVER THE WEEKEND, the fishermen’s colony of Worli Koliwada in central Mumbai’s western coast, returned eight Covid-19 positive samples. This is a densely-packed neighbourhood where people live in close proximity, and many of them have no recourse but to step out of their homes to collect water or use facilities such as public lavatories.

No one from this area had tested positive before. None of the eight infected had any history of foreign travel or were known to have come in contact with someone who might have tested positive. In fact, as the number of confirmed infections rise rapidly in Mumbai, several such cases are being reported, many of them—in a major challenge to health workers—living in crowded spaces like chawls and slums. Twelve individuals, for instance, living in a single chawl tenement in the city’s Elphinstone Road area tested positive recently. It is suspected that one woman, now dead from the infection, who ran a small food stall in the area, probably picked up the virus from a client working in one of the neighbourhood’s corporate offices, and she in turn passed it on to six of her family members and five neighbours who lived on the floor above.

By Sunday, when the Central Government had identified Mumbai city as one of the 10 ‘hotspots’ (areas where several clusters of infection are reported, and which according to officials, will be more aggressively tested and surveilled), the city’s municipal corporation sealed up the entire Worli Koliwada area along with an adjacent slum. The Elphinstone Road chawl was also sealed. No individual is now permitted to go in or out of the Worli Koliwada area or chawl. The municipal corporation is also carrying out more aggressive surveillance at Worli Koliwada, its workers moving from the neighbourhood door-to-door to check if there may be any individuals who haven’t yet reported their symptoms. It is effectively a lockdown within a lockdown.

It is difficult to foresee what will happen when the 21-day lockdown gets over. If, as the Government currently claims, they are satisfied with the check on the virus and do not extend the lockdown, this is probably one of the ways authorities will use to combat the pandemic’s spread. They will choose to expend their resources in smaller ‘clusters’ and ‘hotspots’ that will most probably emerge, dousing whatever fire emerges there, aggressively surveilling, testing and isolating, and maybe, even conducting localised lockdowns.

WHAT WILL HAPPEN when we arise on the morning of April 15th? Will we have awoken to a somewhat restored world where we still can’t afford to leave all our anxieties behind but, with some care, resume our paused lives? Or will the virus be very much around, running through us and the population and overwhelming our healthcare system the moment the restrictions are eased?

“What the lockdown has probably done is that it has momentarily held the virus down. But it will probably bounce back when you lift it,” says an infectious disease specialist caring for several patients with the infection. According to this specialist who requested he not be named, it is crucial that testing be ramped up. “We still aren’t conducting enough tests. It is only with more tests that you get a more accurate picture of how far the virus is spreading, where all it is concentrated. When we get such information, we can focus our energies there.”

According to most estimates, a three-week lockdown will not be enough. Bill Gates, for instance, talking about the US, recommends at least six to 10 weeks of “extreme shutdown”. A study put out by the Imperial College London—looking at the US and UK cases—suggests that in those countries, some form of lockdown will need to be implemented intermittently for the next year-and-a-half or so until a vaccine becomes available. Otherwise, once interventions are relaxed, transmission will rebound.


Some claim a ‘flattening of the curve’ already seems to be taking place in India. Before March 21st, cases were doubling every three days. Now it seems to have slowed to five days

There have been a few non-peer reviewed studies based on mathematical models in the last few weeks that seek to predict what could happen in India. One such study—conducted by an interdisciplinary group of scholars and data scientists from the US and India called COV-IND-19 Study Group—predicts that without any interventions, such as the ongoing lockdown, by April 15th, there will be nearly 5,000 infected cases in India. By May 15th, it will have risen to over 58,000; over 100,000 by June 1st; and by over 130,000 by June 15th. These are still conservative figures based on data collected up till March 16th. They rely on reported infection numbers, which is probably highly under-reported because of the low number of tests being conducted.

A particularly interesting study is one conducted by mathematicians (Ronojoy Adhikari and Rajesh Singh) from Cambridge University in Britain. Here, the two create a model that among other things, factors in different age groups and how social contact occurs between them in different settings such as the house, workplace and school in India, and compares that with Italy and China. The Indian house, they thus show for instance, provides the main channel of transmission between three generations (this is much smaller in China, and negligible in Italy).

Using this model, they predict that a three-week lockdown will be insufficient. The duo calculates that the Government should either go for three consecutive lockdowns (a 28-day-long lockdown following the current one, and then a final one for 18 days, each one of these three spaced by 5 days of suspension) or a single, long lockdown of 49 days. Either of these two steps, they calculate, will bring the number of infections down to manageable limits, where just explicit contact tracing and quarantining of suspected and infected cases will be sufficient in preventing a resurgence.

All model studies, however, have to be taken with a pinch of salt. They are based on certain assumptions that are valid at one particular time and begin crumbling when there are uncertainties. And there are perhaps few uncertainties as large as that of human behaviour in the face of a pandemic.

Some, looking at the data of the growth of cases in India, claim that a ‘flattening of the curve’ already seems to be taking place. Before March 21st, when stricter travel restrictions, social distancing measures and the shutting down of schools and institutions were put in place in many areas, the number of cases in India were doubling every three days. Now, according to Brookings India, it seems to have slowed to five days.

“We are probably still in the early stages of the virus’ spread here,” the infectious disease expert quoted above says. “We bought ourselves some time with the lockdown. I hope we have been able to use this to ramp up our capacities, getting more hospital and ICU beds, more ventilators and PPEs (personal protective equipment for health workers). We are going to need all of it.”