As humans know it and as the virus knows it 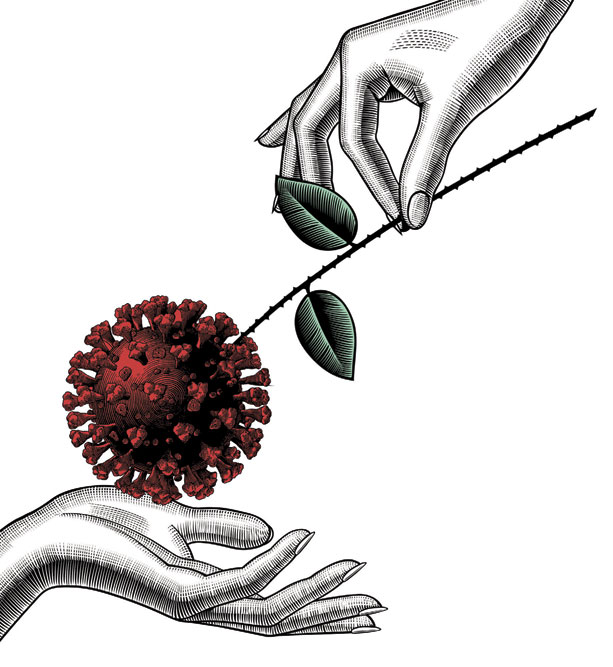 
AN ARGUMENT THE American Conservative thinker and journalist Ben Shapiro makes against abortion is what if astronomers reached Mars for the first time and found a foetus? Would it be considered life or not? The answer, he says, is not in debate by anyone. A single cell would be termed life anywhere outside earth. Ergo, killing of foetuses is murder and therefore abortion is wrong. The argument is not ironclad. What if astronomers went to Mars and discovered a chicken? Should it mean that no chicken should ever be consumed ever again? It is thus predicated on the idea that human life is sacred. But why should it be so? Shapiro does not believe in the sacredness of human life when it comes to the death penalty, which he is in favour of. His reasoning is that babies are innocent and someone who murders is not. That leads to a contradiction. If it is alright to kill in some circumstance despite the value we have placed on human lives, then all that is necessary is to extend a circumstance to the killing of foetuses, for example, danger to the mother’s life or convenience. Finding a foetus on Mars should not then give an absolute illegitimacy to killing them. The value of human life is just what we make of it. Shapiro is an orthodox Jew and so that shapes his view. Rationalists will just as legitimately change the definition of life to make foetuses an outlier without absolute survival rights.

The question of what life is can get more confusing. Each human being is not just one life. The body is replete with trillions of bacteria. And, both these bacteria and us are relentlessly home to viruses. There is not a moment from birth to death that they are not part of us. How then do you say that it is not the body itself? If you can’t get around to that view, then consider that the body, as you understand it, sheds almost all of itself many times over. Cells die, new ones take their place and it happens to every single cell. Who is the one alive? The value we give to our lives is merely a corollary of human consciousness. For all the rest of organic nature, it is instinctive; the fundamental line of the software—‘survive, reproduce’—from which all the other codes got written. For humans, it is both instinctive and reasoned. Otherwise, what is the choice facing humanity today—to save the lives of the aged and the unwell, versus undergoing massive losses to the general welfare of the species by not shutting the world down. It is ennobling that few governments have really had to think what decision to take. The lives of the weak have been given precedence over the comfort and security of the strong. Animals would not necessarily make the same decision, their instincts might guide them elsewhere. The value appropriated to human life by us is also forced onto everything else on earth with great success. Everything animate and inanimate on earth is now in our service.

Then comes a virus which really doesn’t care for the diktat.

The irony is that the virus is not even ‘alive’ as per human construct. In one YouTube clip, Vincent Racaniello, a doctor and professor at Columbia University, who is a populariser of virology, delves into the question. He first explains what it takes for something to be termed alive. It must be composed of one or more cells; must have homeostasis, the ability to regulate its inner environment, like temperature; must be able to generate energy; must grow; must adapt to new environments by evolution; must respond to stimuli, like a plant moving towards light; and finally, be able to reproduce. He then pulls a pock-marked, multi-coloured ball with a thread inside, a model of a protein shell protecting a strand of ribonucleic acid (RNA) inside of the polio virus. And he says, ‘On its own, it doesn’t have any of the properties listed above.’ The virus by itself is thus not alive. On the other hand, it can suddenly develop properties of life after it enters a cell. It takes over the cell and turns it into a factory making copies of itself. The cell, which now belongs to the virus, is alive. Racaniello defines virus as an organism with two phases: the virus particle which is not alive, and then the infected cell which is clearly alive. The virus bequeaths life to itself through us.

Once the button of life is switched on, then like all beings, the code—continue by reproducing—becomes operational. Through great cunning, it makes those it infects a partner in this. Take rabies, a virus that has been conquered in the developed world even as India remains its epicentre. A rabies virus that infects a dog makes it change its behaviour so that the dog helps the virus in its transmission. It makes the dog more aggressive which leads it to bite others, thus passing on the virus through its saliva. It also makes the dog travel around in larger circles so that the area the animal covers is more, increasing the probability of it biting others, and thereby transmitting the virus. In a study published in Scientific Reports in 2017, researchers looked into how this was done. Science Daily, reporting on the study, quoted its co-author as saying that the viruses collect in the spaces between brain cells during the early stages of infection. Brain cells communicate in these spaces. The researchers looked at how viruses bind to receptors there and change how brain cells normally communicate, thus changing the behaviour of the infected animal.

The report added: ‘This change of behavior could work to the advantage of the virus, changing the behavior of infected animals to increase the chances that infection will spread to other animals. In one of the experiments, Hueffer (lead author Karsten Hueffer of the University of Alaska, Fairbanks) and his colleagues injected a small piece of the rabies virus glycoprotein into the brains of mice. “When we injected this small piece of the virus glycoprotein into the brain of mice, the mice started running around much more than mice that got a control injection,” he said. “Such a behavior can be seen in rabies infected animals as well.”’ Man has still not developed a cure for rabies. But when Louis Pasteur discovered a vaccine as far back as 1885, we exercised domination over the disease even before we knew such a thing as virus existed. But these are always Sisyphean victories. The same virus mutates or new viruses are born and all that we can do is relentless opposition.

There is a fundamental difference between how the virus and the human approaches life. Human beings have become conditioned to give priority to individual life—first save yourself, then family, then friends, then tribe, then country. It is only through an act of collective will that this conditioning can be changed. And then too it is tenuous. That is why societies collapse in the face of a pandemic; once the illusion of control is broken, it is every man for himself.

FOR THE VIRUS, the individual is inconsequential. It starts as non-life, enters a cell and becomes life. But then it destroys itself, to let all its copies out. It is designed to die to keep the replication going. The advantage of that is exponential growth. It is what makes Covid-19, which started as one single virus just a few months back, being all over the world today in numbers so vast that it is impossible to compute. In a lecture, Vincent Racaniello presents a few slides to give an idea of the vastness of virus numbers at play in the world. In one slide, he talks about just one category of viruses that infect bacteria, called bacteriophage. They weigh a femtogram, which is 10 to the power of -15 (0.000 000 000 000 001). Even for so infinitesimal an organism, if all the bacteriophage in the waters of the earth were added up, it would amount to 10 to the power of 30. And that is about 1,000 times the biomass of all the elephants in the world put together. And string them end to end, it would span a 100 million light years. Just a litre of seawater has more viruses than all the people on earth.

The only thing that really saves human beings is that the virus has no interest in killing us. In fact, the more we stay alive it is good for them, because they get trillions of more lives in the bargain. At some point, even if human beings do nothing at all, Covid-19 will make an easy truce and turn more and more benign to become a seasonal flu. These terms of peace are unacceptable to humans. That is the price of every life having value. We might win this time too when a vaccine arrives, but only till one new virus suddenly finds itself at home in a human cell.