Better Days Are Ahead

Investment is recovering and so will the economy 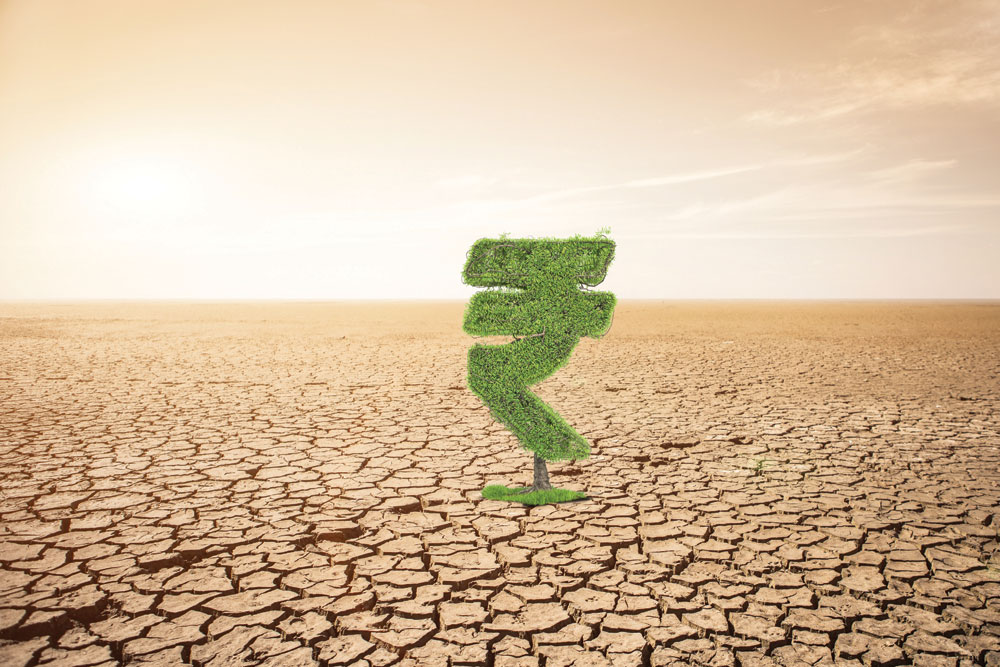 
FOR YEARS, the economy had slipped out of public discussion. It kept growing at 7 or 8 per cent year after year. Imports zoomed ahead of exports, but reserves were comfortable, so no one was bothered. Public finances grew comfortably, so even if the finance minister showered favours on party favourites, no one complained. He also starved his predecessors’ favourite progressive expenditure programmes, but the Congress was so withered that it could not hurt the ruling party. The government took care to maintain difficult relations with our western neighbour; that kept the patriotic fires burning, and tainted dissent with the hues of treason. Regional parties gave up fighting the behemoth ruling party, and lurched between tolerance and cooperation. Indians abandoned the political games they were so fond of, and contented themselves with cricket.

This atmosphere of bonhomie has been recently disturbed by complaints about the state of the economy. The most vehement attack was launched by the last Prime Minister, who also led his party to a painful defeat. He was a distinguished economist before he rose in his party’s hierarchy and finally headed the Government for a decade. So his criticism is not just conventional political aggression; it is worth looking more seriously at his allegations.

He pointed to incontrovertible evidence of the falling overall economic growth rate, and alleged that it was nowhere near ending: the economy was “in the midst of a prolonged slowdown”. He modestly omitted to say that under his prime ministership, the economy witnessed the highest growth rates recorded in India’s history, and led the world as one of the fastest-growing countries year after year. When he departed, that remarkable record ended, and the growth rate came down progressively, which he blamed on his successor’s “all-round mismanagement”. He specified the Government’s blunders of demonetisation and poor implementation of the Goods and Services Tax (GST), and accused it of vendetta politics. 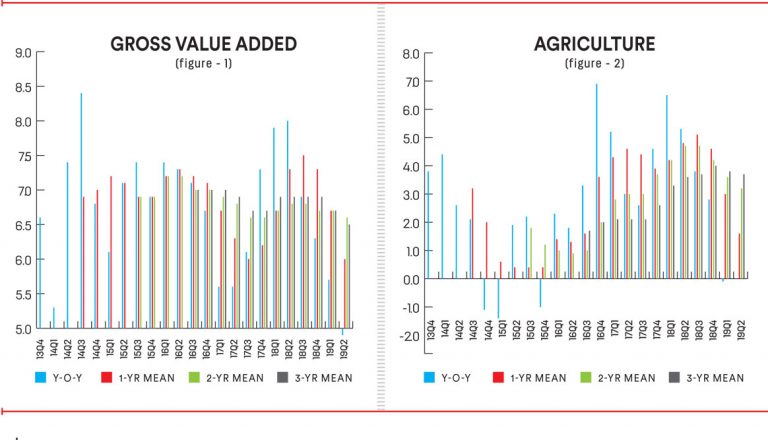 He pointed out the poor growth of tax revenue and said that it was leading to “tax terrorism”: taxpayers were being harassed, and as a result, investors did not want to sink capital into new capacity. The dire state of the automobile industry is known to everyone; in addition, he said many were losing their jobs in the informal sector. He referred to the current Government’s reversal of his regime’s practice of buying up millions of tonnes of wheat and rice at prices raised every year, and said that while inflation had come down as the current Government boasted, farmers were suffering. It had recalculated GDP to show a huge rise in growth under its rule; that had thrown doubt on India’s official data. The Central Government’s raid on the accumulated savings of the Reserve Bank of India (RBI), with no plan to use them, had eroded the central bank’s autonomy and would test its resilience. Whilst the tone of Manmohan Singh’s attack was undoubtedly partisan, the facts on which he based it are incontestable; the only question that a dissenter can raise is whether he ignored important facts that went against his premise. 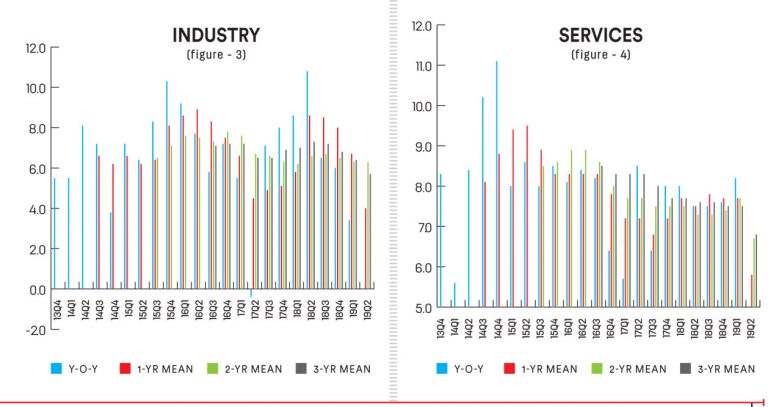 I will not dissent or agree with him; and as I said, the facts he cited are incontrovertible. I want to look at the basic economic statistics to see what story they tell. In Singh’s view, the economy is going from bad to worse; this is what I shall try to test against official statistics. If he is right, they should show progressive economic deterioration.

First, a word on statistical method. All the economic debate in this country is based on year-on-year rates of change: one takes the latest available figure, divides it by the corresponding figure a year ago, and gets the percentage change to it over the year. There is nothing wrong with this, but all figures are affected by sudden events: the housing market may slump because banks cut down on loans, cotton mills may start doing badly because Thais beat Bangladeshis in the world textile market and the latter start buying less Indian yarn, Italy may lose revenue from tourists because Vesuvius starts spewing out lava, and so on. Such events, which do not repeat themselves regularly, do affect economic statistics. They cannot be predicted; nor can their impact on future statistics. The only factors we can look for with any certainty are those that repeat themselves from time to time.

I have used one way of getting past accidental events. Annual growth rates need not be based only on two figures a year apart. One can take the ratio of two figures two years apart, calculate its square root, and get the two-year growth rate. I have calculated four growth rates from year-on-year to three-year; that way I get four views on the growth rate, and catch it if the year-on-year growth rate is behaving funnily. I also use calendar years, and not the financial years that the Government is addicted to. So I can be brief and commonsense: I can talk about 2015 instead of 2014-2015 or 2015-2016.

Let me begin by looking at growth in gross value added (GVA). I would have liked to show GDP growth, but fashion has changed: the Indian statistical authorities have started publishing figures of GVA instead of GDP. The difference is generally small, but small differences in absolute figures can give huge differences in rates of change, which is what we are looking at. So my conclusions may be coloured by the whims of official statistics, but there is nothing I can do about it. 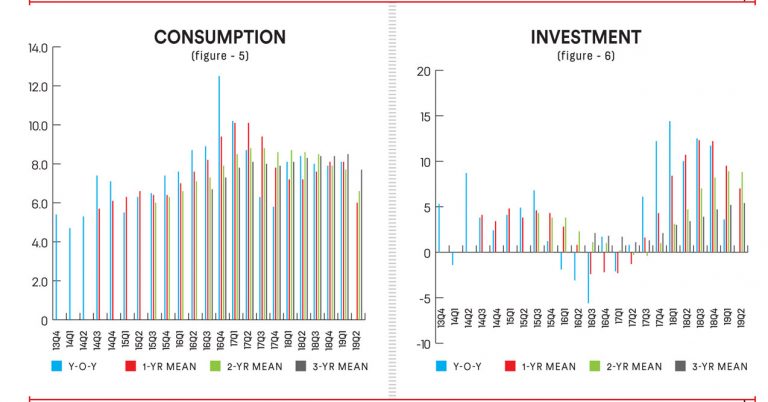 Figure 1 shows a clear falling trend in the growth rate. The one-year growth rate shows a dramatic fall from 8 per cent in 18Q2—that is, April-June 2018—to 4.9 per cent in 19Q2. Longer periods show less drastic falls; the three-year rate hardly falls at all. But all the series show a fall, and all date its beginning to a year ago.

The cycle is different in different sectors. Agriculture was in dire straits in 2014 and 2015; its growth was close to zero (Figure 2). Then it started rising, and was close to 4 per cent towards the end of 2018. Its year-on-year growth has collapsed from 6.5 per cent in 18Q1 to 0.1 per cent most recently. It is greatly affected by weather, so we cannot say that this is the trend. But the low recent growth is real; it is reflected in the bad news we are getting about agriculture. Farmers are in trouble; they are not marching just for drama. In my view, two things happened. First, India passed from food deficit to surplus: it began to produce much more of foodgrains than it was prepared to eat. The Indian custom is that wheat and rice—not other foodgrains—are bought up by the Food Corporation of India (FCI) and left to rot in godowns. The BJP Government did not give the FCI enough money to buy up the rising surplus; and the FCI also ran out of storage capacity and was happy to stop buying. So farmers produced the grains, and were forced to see them rot at home. No wonder they were upset. Second, the grains could not be exported because Indian prices were too high. I do not know if the Government saw this. It has been lackadaisical about price support. But the prices did not collapse to the level of international prices, at which businessmen would have started exporting them—if the Government had allowed them. Briefly, the Government has been inept and inactive at a time when the situation was changing and required rapid action. 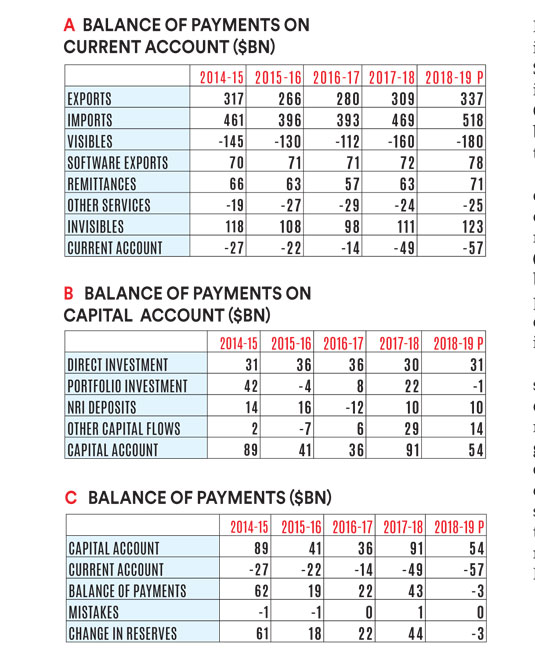 Industry has been growing at 6-8 per cent since 2013 (Figure 3). But the growth rate has trended down since early 2018. Industry was unpleasantly surprised by the recent slowdown: its inventories started growing, it needed finance, and no one was willing to lend to it because it could not repay earlier loans. In my view, the Securities and Exchange Board of India (SEBI) has killed off the equity market by over-regulating it; so industry has become unduly dependent on debt. And borrowing is inconsistent with the characteristic instability of industrial growth, which can be accommodated only if there is enough equity to bear the losses in bad times. So industry faces a structural problem thanks to SEBI and the financial markets; its slowdown is not cyclical, and it cannot be revived without radical structural reforms.

Let me now come to services—the dominant sector, accounting for two-thirds of the economy. It was growing at a fantastic rate of 10-11 per cent; it peaked in 2014 (Figure 4). Then its growth came down, and stabilised at about 7.5 per cent. The latest figures suggest that it may be falling further, to 6 per cent or less, but we cannot be sure. If it grew at 6 per cent and the rest of the economy did not grow at all, the overall growth rate would come down to 4 per cent. This is the lowest that growth in the coming years is likely to reach.

What about the external sector? There has been little change. None of the current account figures—exports of goods or services, imports, software exports, inward remittances—show any trend, upward or downward (Table A). Portfolio investment shows some instability, but the capital account figures—capital flows, NRI deposits—show no trend (Table B). India ran a current account deficit throughout, but more than enough capital inflows flowed in to finance it (Table C).

So then—what caused the current slowdown? Consumption growth peaked at a fantastic 12.5 per cent at the end of 2016 and has come down a bit since; but its trend rate remains a high 8 per cent (Figure 5). It is investment growth that collapsed: there was overinvestment in the early years of Congress rule, and investment growth was down to zero by 2013 (Figure 6). It has been fluctuating since 2016; but there is a well-hidden, underlying upward trend. Investment is recovering—and so will the economy, irrespective of whether Manmohan Singh rules or Narendra Modi. Better times are coming.

Ashok V Desai
Ashok V Desai is an itinerant economist. He was the Chief Consultant to the Ministry of Finance