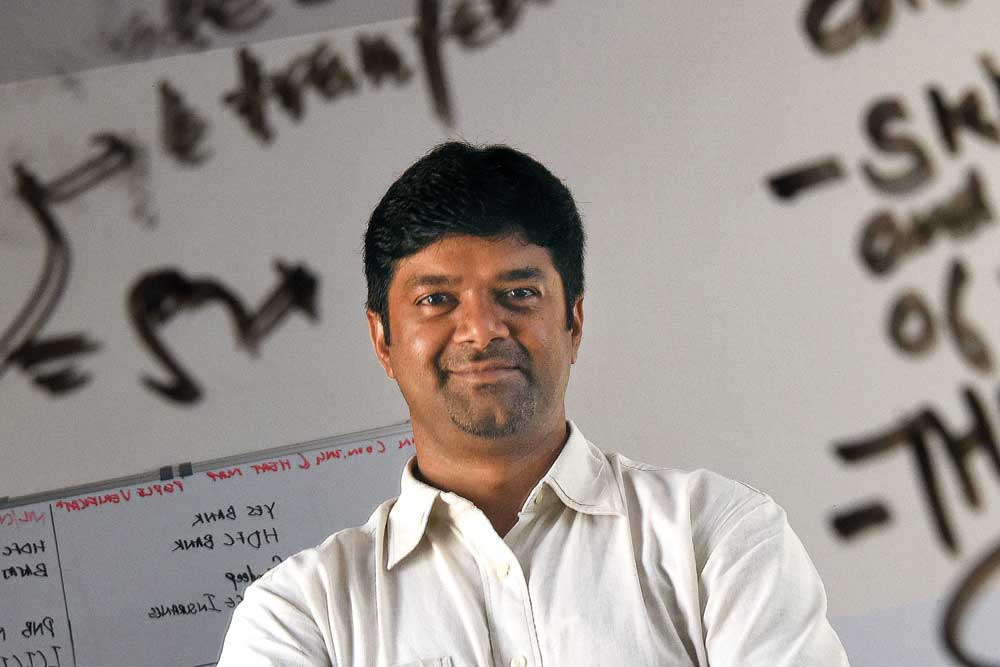 A little over two years ago, Adarsh Natarajan walked into a medical diagnostics lab in Malleshwaram, Bengaluru, and asked to meet the founding doctors. At the very outset, it seemed to them that he had a sinister agenda. He dropped the term du jour—‘machine learning’—and it fell with a thud. Dr Vani Ravikumar, senior pathologist at RV Metropolis, was livid. “‘How dare you?’ was my first reaction. ‘You are here to tell me that my job will be made redundant in five years and that I should help you make sure of it.’” Dr Ravikumar’s area of expertise is cervical cancer detection, and Natarajan needed her to help him build an intelligent software that could detect the earliest signs of the disease better than a pathologist. “Adarsh was persistent and after a while I could see the point. If machines could take over mundane tasks like reading plates—reading one patient’s cervical scan could take up to 25 minutes—doctors could focus their clinical acumen on more important things, like the treatment plan,” she says.

Natarajan, 40, who had built Aindra Systems, a computational pathology startup, plank by plank since 2012, was clear about where his focus lay. “Cervical cancer is a slow-progression disease that claims 67,000 lives in India every year. This is because of the high cost of diagnostics, social and physical taboos that prevent women from voluntarily getting screened, and a low detection ratio. If we could eliminate two of these factors, we could make a big difference,” he says. “Our healthcare systems are discontinuous and reactive, when they should be continuous and predictive. One need only get tested once in five-to-seven years, and yet, the death-to-incidence ratio for the disease is 50-60 per cent.” While awareness about breast cancer is on the rise in India, cervical cancer, caused by the human papillomavirus (HPV), often goes undetected. The screening test is simple enough: a PAP smear, which is stained and observed under a microscope for abnormalities that could indicate cancer. If the pathologist flags it, then the cervix is inspected using a colposcope and a biopsy performed. “Sixty to 65 per cent of the time, pathologists fail to detect the onset of cervical cancer despite multiple levels of screening,” says Natarajan. Medical image processing algorithms powered by advanced GPUs can do a lot better. In over 90 per cent of samples screened, Aindra’s software correctly identified cancerous cells. “I had my doubts about the Aindra software, but after it has been trained on thousands of samples, it is proving extremely accurate in detecting early stage cellular anomalies in asymptomatic women,” says Dr Ravikumar, one of several doctors consulting for Aindra. “Indian pathologists, as far as cervical cancer is concerned, still look at physical samples under the microscope, and it’s like looking for a needle in a haystack. Digitisation and cloud storage are creeping in very slowly now. The next step is machine learning and it is the way forward for developing countries where molecular level testing for the virus is not an affordable option.”

A cervical cancer screening test could set you back by Rs 800-Rs 2,000, the cost rising with your distance from a metro city. In Bengaluru, it would typically cost Rs 1,000, doubling just 80 km away, in Tumkur. Aindra, which has built a full stack computational pathology platform, wants to hit points- of-care at the remotest corners of the country later this year at a pay-per-scan price of about Rs 200. The startup, which has raised under a million dollars in funding so far, and is supported by a Rs 50-lakh grant from the Karnataka government, has been running clinical trials for the past six months at top oncology departments and hospitals in Bengaluru including the Kidwai Memorial Institute of Oncology and Manipal Hospitals. “With some minor tweaks, we can also deploy the system for oral and prostate cancer screening,” Natarajan says.

We are processing visual data to supplement human understanding and help in qualitative assessment. As with human effort, in the case of machine learning, too, practice makes perfect, says Adarsh Natarajan

He did not always know so much about medicine. An engineer who had spent 12 years at companies like Infosys, Wipro and Lucent before joining IIM Bangalore, Natarajan says the key takeaway from his MBA was that it reduced the “unknown unknowns” of life. It was at IIMB’s Centre for Public Policy that Natarajan’s startup crystallised. Faced with the challenge of fixing subsidy leaks in the state government’s midday meal scheme, Natarajan built a biometric scanner that used facial recognition to record attendance and machine learning to verify photo IDs against facial images captured. It did not take him long to make the next leap. The possibilities of deep learning—an ongoing effort to mimic the human brain using a neural network—were endless, especially in healthcare. Data from massive medical image repositories could be crunched to identify complex relationships and patterns that could supplement the ability of physicians to detect and respond to anomalies. Pattern recognition, and more importantly, predictive analytics is now expected to drive preventive medicine in the next few years, especially in countries like India where there are alarming gaps in the healthcare system. The Indian Journal of Public Health 2017 puts the number of practising doctors in India at 4.8 per 10,000 population, a far cry from the WHO-recommended doctor-patient ratio of 1:1,000.

Natarajan belongs in an era of human endeavour shaping intelligent algorithms into the next wave of experts in healthcare, financial services, logistics, education, agriculture and factory management. What makes this paradigm shift possible is reams of data, much more than what traditional statistical reasoning can handle, fed into powerful off-the-shelf hardware. The data fuels an algorithm that has undergone rigorous apprenticeship under human experts. “We have verified Aindra’s diagnosis against 600 cases where a biopsy had been performed to confirm the presence of cancerous cells,” says Nirmal Jith, a 30-year-old data scientist at Aindra Systems who spends much of his day at the ‘lab’, peering into a black screen with undulating hills of green and red. A board lists the clinical trials underway and an NVidia GPU stares at you from behind a glass casing, effortlessly processing giant medical slides. “When we say hundreds of cases, it actually translates to thousands of samples. Each slide is broken up into a grid of 20 cells. The magnification is so high that a grid measures 1 lakh pixels by 1 lakh pixels. The algorithm detects abnormal cells at this granularity and then if the pattern is found to be repeating across other grids, the sample is flagged,” says Jith. “We can also suggest a course of action, ranging from cryofreezing to a hysterectomy, depending on the extent of the cancer and by predicting its spread.”

I had my doubts about it, but after being trained on thousands of data sets, the software is proving extremely accurate in detecting early stage cellular anomalies in asymptomatic women, says Dr Vani Ravikumar pathologist

Aindra occupies two floors of an apartment building tucked away in an obscure part of south Bengaluru. It is as low-key as Natarajan, a quintessential conservative south Indian who refers to money as “rocket fuel to be used only when you need a huge propulsion”. On the lower floor is the team of nine that builds, maintains and productises Aindra’s cervical cancer diagnostic tool. Upstairs, in parallel, another small team, under the banner of Aindra Labs, is working on broadbasing AI for use cases ranging from risk assessment for insurance companies to plugging wastage at timber processing units. “This has been our bread and butter so far. We have seven-to-nine large clients from different industries across the world. Aindra Systems was an idealistic offshoot of our ability to build AI-based solutions where they are most needed,” Natarajan says. Aindra Labs’ annual revenues are in the range of $150,000-250,000. With the global market for healthcare artificial intelligence tools expected to cross $30 billion in five years, Natarajan hopes Aindra Systems can soon surpass the revenues of its sister concern. Among the AI startups in India that are riding the wave are Niramai Health Analytix, which uses thermal analytics for early-stage breast cancer detection; Advenio Tecnosys, which detects TB from chest x-rays; and Orbuculum, which analyses genomic data to predict cancer, diabetes and neurological disorders.

Of these, Aindra, which does not restrict itself to healthcare, has the broadest base. No matter what problem you are dealing with, it is about the quality and the relevance of the data, Natarajan says. Subject matter expertise is critical to determining the parameters of what constitutes quality data. When a Fortune 500 company with interests in the Chilean forestry sector hired Aindra to analyse the quality of wood that was brought into its plants, it deployed its computer vision algorithms to identify below-par subcontractors but not before understanding the domain of forestry and the uses of the timber that was under scrutiny. “Each plant received 10- 20 truckloads of logs in a day and it is quite a task to inspect each piece and track it down to who brought it in. We placed cameras at strategic locations to analyse how uniform every piece of wood was, irrespective of its size, and to determine its provenance,” Natarajan says. A major Indian insurance company uses Aindra to assess the level of risk at large factory units and warehouses. The insurance sector relies on inspectors to visit a unit and to manually ascertain risk before the premium is calculated. To eliminate human subjectivity, Aindra asked the inspectors to take photos with their smartphones of fire extinguishers, the number of exits and other indicators of safety preparedness. “What we are doing is processing visual data to supplement human understanding and help in qualitative assessment,” Natarajan says. “As with human effort, in the case of machine learning, too, practice makes perfect.”

Among the emerging uses for deep learning is crowd profiling, but Natarajan draws the line at politics. He turned down a major deal with a national party, he says. “We are in this business to make the right kind of difference, although we do succumb to flights of fancy sometimes,” he says, light- heartedly discussing Aindra’s latest client: a chain of skin and hair clinics that wants them to use pictures of prospective patients and the rate of progression of their baldness to predict what they will look like a few years from now. If only it was just as easy to nudge women to get screened for cervical cancer.