The Rediscovery of Nehru

How Nehruvians revised their idol 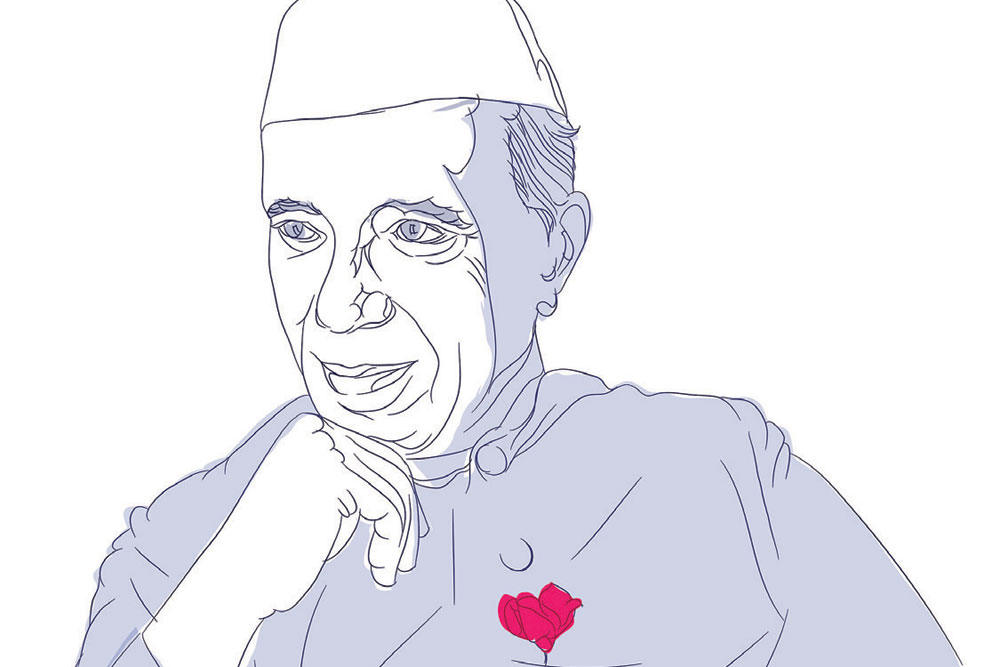 
POVERTY WAS THE price Mahatma Gandhi extracted from his disciples for passage into the freedom movement. The clear-headed savant never confused lip-service with service.

When Gandhi returned to India in 1915, the natural gravitation into the nationalist framework defined by the Congress party was from men who came from a similar background: born into families with social status who had improved their financial means through professional achievement. They might or might not have been wealthy, but they were not poor. Acharya Kripalani was a professor at Muzaffarpur who took a group of students and fellow academics to the railway station to greet Gandhi who was en route to Champaran in 1917.

In contrast, Babu Rajendra Prasad was one of the richest lawyers in the province. Gandhi’s first halt on this epic visit to Bihar was Patna. He headed from the station to Prasad’s home for a bath and rest, only to be turned away by the servants who would not permit him to use the mansion well. Rajendra Prasad was on holiday, and Gandhi had come without warning.

Vallabhbhai Patel began life in a family of modest means but practised as a successful barrister until Gandhi gave him charge of the peasant movement in Bardoli, Borsad and Kheda. Maulana Azad’s father was an alim who taught and studied in Mecca before he returned home to Calcutta. The Maulana was editor of Al Hilal when barely out of his teens. But each one of them, along with innumerable others, abandoned a lifetime of comfort to become a Gandhian.

The most privileged Gandhian was Jawaharlal Nehru, born with the classic if clichéd silver spoon in his mouth. He was sent by a doting father, the self-made Motilal Nehru, to Harrow and Cambridge for school and college. Charles Darwin, grandson of Britain’s most famous scientist, and St John Philby, who would join the ICS and become father in India of Britain’s most famous spy Kim, proposed Jawaharlal for membership of the debating society Magpie and Stump. During the three years on campus, Jawaharlal spoke only once, for two-and-a-half minutes, on the motion “This House approved of the present public school system”. Jawaharlal preferred to pay a fine as atonement. The leader who would become a great orator seemed to suffer from some form of stage fright as a student. He was interested in politics only to the extent of checking the odds on political parties in an election. As he admitted: “I was always, like my father, a bit of a gambler, at first with money and then for the highest stakes, with the bigger issues of life.” He describes those days with impressive honesty and persuasive style: “My general attitude to life at the time was a vague kind of Cyrenaicism…It is easy and gratifying to give a long Greek name to the desire for a soft life and pleasant experiences.”

Jawaharlal developed a trick which others have emulated. He deliberately undersold his academic capabilities in letters to his father. So when in June 1910 Motilal learnt that his son had passed with a second class from Trinity, the celebrations at Allahabad were lavish. Champagne flowed and every servant got a gift and increment. The hesitant scholar in England received a handsome £100 for a holiday in Europe. Wealth had given Jawaharlal the freedom to be careless. For three more years he lived in England, with rooms at Holland Park, spending £800 a year, until on June 19th, 1912 he was admitted to the bar.

But beneath the veneer there was a radical lurking, waiting to emerge. The first signs were evident in his defiance when Motilal indicated that he was arranging a marriage for his son. Jawaharlal felt that his generation should marry outside its community. Motilal snubbed such impertinence and the dependent son apologised within a week, trying to disguise his surrender with college humour: “Of marriage, in the abstract, I have a very high opinion, so much so that the practice of it is sure to disappoint me. This sounds like the saying of the Irishman who declared that he had such regard for truth that he refused to drag it into his own petty affairs, but really there is some sense in it.”


For some Nehru was not Gandhian enough; for others he was not socialist enough. He could not hide his anger. From this rift emerged the transition to what became known as ‘Nehruvian socialism’

The nationalist streak was soon evident in decisions. He refused to join the Indian Civil Service, despite his father’s declared preference for the elite job. He became angry when he heard that Motilal might accept a knighthood at the 1911 Durbar in Delhi. Fortunately, Motilal had no desire to accept such a gift from the British Raj, although he did go to the Durbar. By 1916 Jawaharlal’s politics was apparent. His first public speech in India, on June 20th, 1916, at Hardinge Theatre, was in protest against censorship. He began with a line from Latin, Quos Deus vult perdere, prius dementat: Those whom God would destroy, He first makes mad. By 1919, Jawaharlal Nehru was ready for larger things, and began to comment on economics. “Orthodox socialism,” he said, “does not give us much hope.”

Mahatma Gandhi’s rules did not change; he selected disciples with the diligence of a prophet who knows that commitment will be tough and the rewards distant, if they come at all. Gandhi’s logic and rationale were irrefutable. Colonialism had impoverished and killed India’s poor. This was literally true, for countless millions had died in famines which had started as a drought but became mass-killers because of merciless taxation and exploitation. Freedom from British rule meant nothing if it did not liberate Indians from hunger and give them an improved life. A leader had to identify completely with the poor, not through the easy means of a sermon but by sacrificing comfort and forsaking the temptations of money. This was the minimum, non-negotiable condition.

Jawaharlal consciously rejected the luxury of his inheritance to become the child of a fakir.

It was, ironically, the dream of poverty eradication which eventually took Jawaharlal away from orthodox Gandhian thought. Gandhi chose to make the cottage into both the metaphor and the mechanism for economic liberation. “I must frankly confess,” Nehru said at the 1929 Congress session over which he presided, “that I am a socialist and a republican and am no believer in kings and princes… .” There was no argument over republicanism in a future republic.

But there was a rift over the road to prosperity. Nehru was never a communist; indeed, as early as in 1931 he was expelled from the Soviet-inspired League against Imperialism as a “traitor to the cause”. Nehru was a democratic socialist, a philosophy in which democracy was nurtured by a fundamental right to freedom but socialism arrived shackled by theories which refused to accommodate the flexibility of practical ground reality. Policies were framed in which the macro overwhelmed the micro, particularly in the planning of vast schemes, rather than enabling integration. Jawaharlal Nehru became the leader of a strong group in Congress which was politically Gandhian and economically leftist.

This led to a quandary when he became prime minister. For some he was not Gandhian enough; for others he was not socialist enough. He could not hide his anger. In a letter to Sardar Patel on June 30th, 1949, Nehru wrote: “As for the Socialists, they continue to show an amazing lack of responsibility and constructive bent of mind. They seem to be all frustrated and going mentally to pieces.” From this rift emerged the transition to what became known as “Nehruvian socialism”, at the helm of grand ideas that were meant to transform India towards post-colonial progress. Industrialisation, rather than agriculture, was the key to the engine. Agricultural reform petered out after the abolition of zamindari. The state stood, in his famous phrase, on the “commanding heights” of the economy. The vision was impressive, but by the 1960s and 1970s it became apparent that the state sector was getting immobilised by institutional lethargy and the lethal red tape of an intrusive bureaucracy, while the private sector had been turned into a series of cartels. It took another two decades to reinvent the doctrine until it became capitalism with socialist characteristics.

In an irony, this revisionism was done by Neruvians.