What was it about VK Krishna Menon? 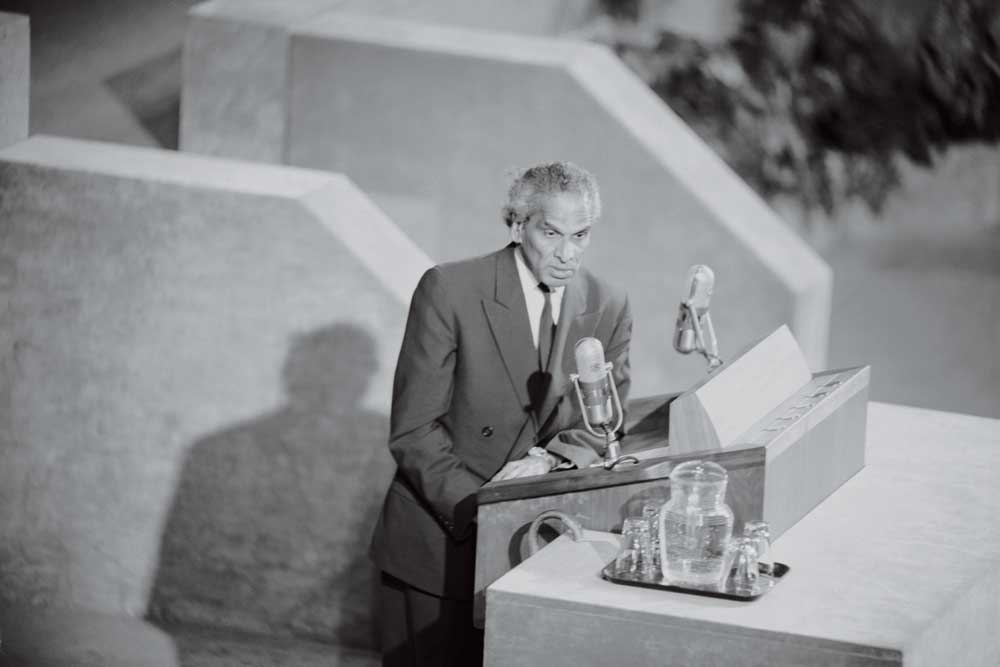 
I ONLY MET the legendary VK Krishna Menon once, and in hardly the most propitious of circumstances. My father, then only 38, had been hospitalised with a heart attack in 1968 and I was in his room, an anxious child not yet 12, when his old friend came calling. Krishna Menon was out of office at the time, having been defeated the previous year in his attempt to get re-elected to his seat in Parliament, and I did not quite know what to make of him. He arrived in his white mundu and shirt, the unruly shock of white hair distinctive above his hawk-like nose, trailing a couple of hangers-on, and greeted my father with a bluff comment: “What’s this about a heart attack? Chandran, I didn’t know you had a heart.” That is all I remember about the great man, though I also recall being childishly offended by his remark, then growing up to think that his was a very witty comment, only to conclude a few years later that it was not witty enough. (My father was famed for his generosity of spirit, so Menon could easily have said, instead: “Chandran, we all know you have a heart. You didn’t have to prove it this way.”)

Four years later, when I went to college in Delhi, Krishna Menon was back in Parliament and my father urged me to call on him. I never did, for reasons I can no longer explain; and before I had graduated, he had passed away. My father had helped him establish the India Club in London’s Strand, where masala dosas and tea could always be had at prices affordable to young Indian newsmen. I never learned whether Menon had been partial to dosas, but of tea he was a notorious addict, admitting to consuming 38 cups a day. I will always regret never sharing one of those with him.

On May 3rd, 2021, the handful of people who still cared marked Menon’s 125th birth anniversary. Or maybe we’d missed it; even on the subject of his date of birth, Menon could not shake off controversy. (1896 is the official date, though some insist it was actually 1895.) He was an extraordinary figure, one who attracted more opprobrium in his lifetime than any other Indian leader, certainly in the West, where the choice epithets about him ranged from “Mephistopheles in a Savile Row suit” to “the snake charmer with hooded eyes” and even, unimaginatively, “the devil incarnate”. Time magazine put him on its cover in 1962, a snake hissing behind his head: it was an honour the newsmagazine had been slow to accord the Mahatma, but Menon was a foreigner most Americans loved to hate. The recent General Election in India was described by Time as “a mandate for Menonism.”

He has also, paradoxically, been unjustly treated by the guardians of our historical memory. Krishna Menon is remembered in India largely for two things: delivering a record-setting marathon seven-hour and 58-minute speech on Kashmir in the UN Security Council 50 years ago, during the course of which he fainted, had to be revived and carried on the next day; and presiding over a defence ministry whose lack of preparedness for war in 1962 led to the humiliation of military defeat by China, a humiliation seen as having been brought about by Menon’s own leftist illusions about the communist giant.


In the 1950s Menon was the world’s premier diplomat, leading negotiations over a peace plan for Korea, a ceasefire in Vietnam and France’s withdrawal from Algeria. He brilliantly resolved the crisis when China shot down an American plane

His abrasive personality, his reluctance to suffer fools gladly, his bluntness to those he did not judge intellectually worthy of his time—even Nehru’s sister Vijaya Lakshmi Pandit, the first female president of the UN General Assembly, fell short of his standards, and complained to the prime minister of his “rudeness” to her—meant that he had few genuine loyalists. In good times, his brilliance, his restless energy, his eloquence, and his astonishing reserves of stamina, carried the day and won him admirers if not fans; but when disaster came, he was left friendless and alone, abandoned by the party he had served without pay or thanks in the best years of his life. He died a forgotten backbencher, without even a political party to call his own.

His had been an unusual life. Much of it had been spent in London, where he devoted himself to fighting the battle for India’s independence on Britain’s home turf, against men “who draw their incomes from India and spend the evenings of their life in maligning India and her people”. He enjoyed the cut and thrust of debate, campaigning tirelessly for Indian independence and against tyranny: when asked whether India would prefer to be ruled by the British or the Nazis, Menon famously replied that “[one] might as well ask a fish if it prefers to be fried in butter or margarine”. Menon also served as a Labour Party councillor for the London borough of St Pancras, where he established libraries and started a literary festival (Menon had been an early consulting editor for Penguin Books, tricking Allen Lane into publishing A Passage to India by implying it was a travel book). Nehru, who had admired Menon’s record in the UK, rewarded him by making him independent India’s first high commissioner in London, a position which he used to put the former colonial masters firmly in their place. That acerbic wit rarely failed him: when the hapless Brigid Brophy complimented him on his English, Menon retorted scathingly, “My English, Madam, is much better than yours. You merely picked it up; I learned it.”

It was not an approach calculated to win friends, but it did influence people. For a decade in the 1950s he was the world’s premier diplomat, leading negotiations over a peace plan for Korea, a ceasefire in Vietnam and France’s withdrawal from Algeria, among many others. He brilliantly resolved the crisis that arose in 1955 when the Chinese communists shot down an American plane and captured the pilots; it was he who travelled between the two countries and negotiated their release. He became India’s defence minister and the father of non-alignment, but he did not curb his sharp tongue. Menon remained an equal-opportunity offender, skewering the customary diplomatic bromides. In response to US Secretary of State John Foster Dulles’ assertion that American weapons supplied to Pakistan were intended solely for defence against a Soviet invasion, Menon retorted that “the world has yet to see an American gun that can only shoot in one direction”.

I have read no more remarkable exposition of the mindset of the first generation of India’s nationalist leaders than Krishna Menon’s magisterial interviews with the Canadian political scientist Michael Brecher, published in 1968 as a book entitled India and World Politics: Krishna Menon’s View of the World. It is difficult to think of an Indian leader other than Nehru who would have been capable of the extensive discourse on world affairs, human history and international politics that Menon so magisterially managed.

I did not agree with many of Krishna Menon’s views—his socialism was imbibed directly from Harold Laski at the London School of Economics, whose ‘best student’ he famously was, and his anti-Americanism was visceral rather than rational—but I admired the way he expressed them. In 1971, he concluded his chequered political career by running for Parliament from the Kerala capital, Thiruvananthapuram, and winning the seat with the support of the Left against his former party, Congress, after campaigning solely and entirely in English (something inconceivable today, in our era of linguistic pride in each state’s vernacular tongue). He was not, in the sunset of his life, a particularly effective MP, but he remains among the most distinguished—and to this day revered—of my predecessors as Member of Parliament for Thiruvananthapuram.

My father Chandran had helped Menon establish the India Club where masala dosas and tea could be had at prices affordable to Indian newsmen. Of tea he was a notorious addict, consuming 38 cups a day. I will always regret never sharing one with him

Personally ascetic in his lifestyle—as high commissioner he occupied a single room on the Indian High Commission premises rather than living in the sumptuous official residence the Government had arranged in Kensington Palace Gardens—and abstemious in his tastes (he was a vegetarian and a teetotaler), Menon nonetheless strode the world in finely cut bespoke suits and maintained a Rolls-Royce as his official vehicle, believing it necessary to uphold the prestige of his post (“I can scarcely hire a bullock-cart to call on 10 Downing Street”). He refused a salary throughout his years of public service. He was driven instead by a burning desire to drive the currents of history, to lend his mind and his voice to the direction of world events and the course of his country’s future. When he passed away in 1974, the prime minister whom he had known all her adult life but from whom he had parted politically, Indira Gandhi, mourned that “a volcano is extinct”.

Unlike my father, Krishna Menon may not have had a heart; but he had a brain, and a tongue. As his 125th jubilee had come around in 2021, they were both worth raising a toast to.