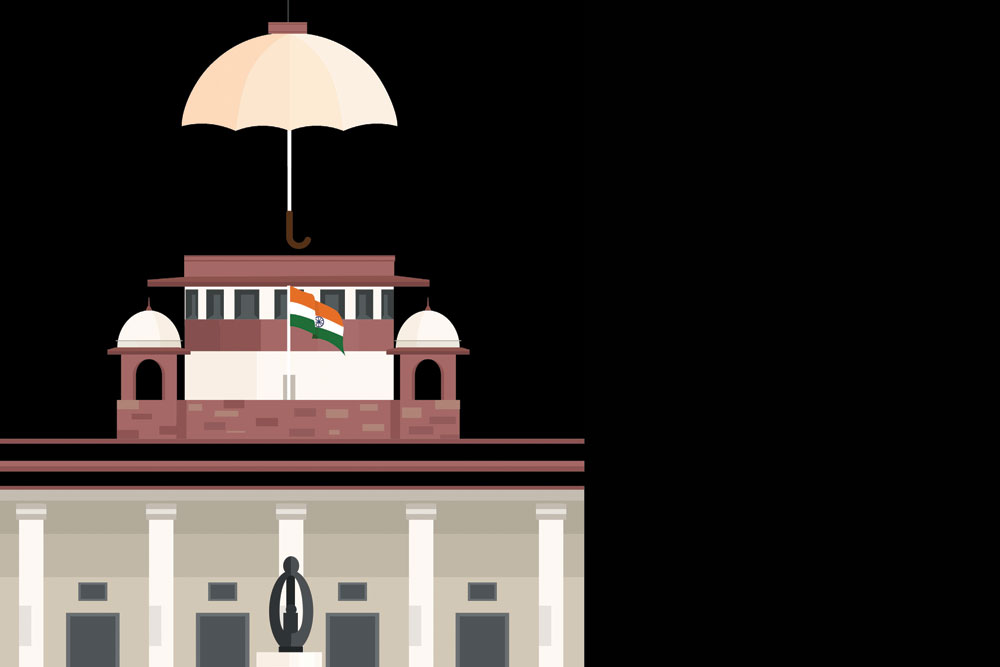 
MUCH WATER HAS PASSED UNDER the bridge since the Supreme Court of India decided an appeals case from Kerala that in­volved the redistribution of the land of a seer’s monastery. The spiritual leader, Kesavananda Bharati of the Edneer Mutt, passed away in 2020. But the case that made him a celebrity in India’s judicial history was decided nearly 50 years ago. The court’s invention of the basic features doctrine, something that allowed it to put a stop to executive and legislative aggrandisement is now viewed with mixed feelings. But there is no denying that after that event the Indian Supreme Court has become the most powerful judicial force seen in any country. Its power of judicial review—that has only gained strength in prec­edent after precedent—is now virtually unchallengeable.

To a great extent, this has served India well. In checking gov­ernment malfeasance—be it in allocation of natural resources or preventing damage to the environment and more—the court has come to the aid of people when there was no other door left to knock on. The list of such instances has gone up dramatically since 1950 when the Supreme Court succeeded the colonial-era Federal Court.

Since then, the judiciary—especially the Supreme Court—has been described as the “guardian of the Constitution” and even as a “preserver of rights”. This has often led to breathless commentary that has even gone so far as to claim that the Supreme Court is a “counter-majoritarian institution” that is vital for safeguarding liberal democracy against “majoritarian excesses”.

There is, however, another—less analysed—role played by the judiciary. This is in its avatar as a careful preserver of the state’s interests. In contrast to its role as a guardian of rights, in this case the judiciary has met with widespread opprobrium. Very often, it is the people who celebrate the expansion of rights who castigate the courts.

Unlike its rights jurisprudence—that is straightforward—the judiciary’s guarding of the state’s interests is indirect, careful and powerful at the same time. The tool that it often deploys, however, is simple: efflux of time. Three cases/issues, two from the past and one set being deliberated, illustrate the approach.

From 1946 until 1951, the Telangana region of the Nizam’s kingdom was in the grip of a communist uprising. The rebellion persisted through Independence and through the liberation of Hyderabad. But its reverberations went far beyond the region: from Bengal to Malabar, communism was in the air. One of the key lead­ers of what was to become the “official left” later, AK Gopalan, had been in and out of detention. In 1950, he was detained under the newly minted Preventive Detention Act. He challenged his de­tention on the ground that the Act violated Articles 19 and 21 of the Constitution. In AK Gopalan vs The State of Madras (1950), the Supreme Court upheld the 1950 Act and did not term Gopalan’s detention illegal. While the court’s reasoning was judicial in na­ture, its impact was political: the government’s hand was strength­ened as it dealt with insurgency and the possibility of communism gaining traction at a difficult time soon after Independence.

In later years, when the judiciary’s role in upholding individ­ual rights and civil liberties came to the fore, this role became less visible. But it was always present.

In July 2004, soon after it lost a legal battle with Haryana over the sharing of river waters, Punjab passed the Punjab Termination of Agreements Act. Using the Act, Punjab “freed” itself from all agreements it had signed with Haryana and Rajast­han over sharing of waters from the Ravi and Beas rivers. In particular, it extricated itself from the agreement of December 31, 1981 that spelled out the allocation of river waters. The law was passed on July 13, 2004 and received the governor’s assent on that very day. On July 22, then- President APJ Abdul Kalam used the power available to him under Article 143 of the Constitution to seek the opinion of the Supreme Court on the legality of the Act passed by Punjab.

Another 12 years were to pass before the court gave its opinion on the four questions asked by Kalam. On November 10, 2016, the Supreme Court answered the reference in the negative. The law was unconstitutional.

What is worth noting is that the court’s five-judge bench took more than a decade to answer the questions posed by the president. The court gave no reason for the time it took—it never elaborates on the time it takes. The opinion of the court, when seen against the political background of the dispute, tells its own story. Sharing of river waters was a volatile issue in Punjab politics ever since the state was reorganised in 1966. In May 1988, 32 labourers working on the Sutlej Yamuna Link (SYL) canal—the canal for sharing river waters between Punjab and Haryana—were gunned down by terrorists. In July 1990, the two engineers in charge of the SYL construction were shot dead by terrorists in Chandigarh.

While terrorism finally ended in Punjab in the mid-1990s, the issue remained controversial well into the 21st century.

In taking its own time to deliberate on the issue, the court also acted as a safety valve: when it answered the reference in 2016, the Shiromani Akali Dal (SAD), the party of Sikh interests in Punjab, tried to capitalise on the matter but it was too late. While the issue continues to simmer and cast an emotional appeal among Sikh farmers, the passage of time has taken the political sting out of it. It is another matter that Haryana never received its just share of river waters, something that was promised to it by law and agreement. The court acted with abundant safety in a matter that at one time was dangerous for the unity and integrity of India.

SOMETHING SIMILAR IS AT WORK WITH RESPECT to the abrogation of Article 370 that conferred a special sta­tus on the then state of Jammu and Kashmir (J&K). The article had a chequered history from 1949 onwards when it was drafted. Originally meant to give autonomy to J&K, the article ultimately became a ‘tunnel’ through which much of the Consti­tution was made applicable to the state. Far from parliamentary sanction, all that any government had to do was issue an “applica­tion order” under Clause 1 of Article 370 to do what it wanted. In effect, it placed J&K in a position worse than even the legislature of a Union territory. But such was the mythology around Article 370 that even after the erosion of autonomy, it was held to be some sort of magical device that was essential for autonomy. Intellectuals and lawyers who made a case for “asymmetric federalism” continued to push out drafts of a “revitalised” Article 370 by removing the word “temporary” from the article. All this was ended on August 5, 2019.

Within days of that event, a slew of petitions were submitted in the Supreme Court that the abrogation was illegal and the method adopted was barred by Article 370 itself. The matter is yet to gather pace in the court. Over the past three years, the court has been criticised by some legal analysts for “delay” and “not acting well in time”, to the point that Article 370 is held to be a lost cause. A lot of contemporary criticism of the court—especially the allegation that it has ‘bent’ to the executive—stems from this case.

There are, however, other legal analysts who think otherwise. At the launch of a book on Article 370 recently, senior lawyer Arvind Datar said that even if the Supreme Court were to roll back Article 370, “[I]t would be more of an academic and theoretical exercise and would be extremely difficult from a practical standpoint.” He added, “Overturning a decision of Parliament which has been implement­ed by the executive is difficult with the passage of time.”

In saying that, the senior lawyer hit the nail on its head. In com­menting on the Supreme Court—which is the controlling force of the judiciary—critics often overlook one elementary political fact: the judiciary is a part of the state and does not stand outside in an antagonistic relation to it. It is inconceivable that the court would take any decision likely to cause damage to the state in any way. In one early opinion, In Re: The Berubari Union dating to 1960, the Supreme Court held that Article 3 of the Constitution did not give power to Parliament to cede territory of any state to another country. The case arose after India signed an agreement with Pakistan to exchange an enclave in Jalpaiguri district of West Bengal. Ultimately, to execute the agreement, the Constitution had to be amended. The ‘ceding’ of territory came at the hands of Parliament and not the Supreme Court.

It is unfair to pre-judge what the court will ultimately rule in the batch of petitions on Article 370, but one can be sure that it will not harm India’s interests in the name of some phoney concep­tion of ‘justice’. The court has never done that.

The judiciary, even as it went about safeguarding rights, has al­ways come out on the side of the government in matters pertaining to national security and the empowerment of investigating agen­cies. From cases involving the Unlawful Activities (Prevention) Act (UAPA) to its recent upholding of the Prevention of Money Launder­ing Act (PMLA), and the consequent clarification of the Enforce­ment Directorate’s powers, the court has sent a very clear signal.

So which role of the court should be celebrated: As a defender of rights or as a defender of the state’s rights? Any dispassion­ate observer would say both. Without the state there can be no rights—only anarchy will prevail—but this elementary truth eludes India’s entire intellectual class that thinks the state is, to use a theological term, evil. By what convoluted process of thought that conclusion was arrived at is best left for another occasion.

The court’s rights jurisprudence often attracts controversy. To an extent this is true: the creation of rights in the court is based on the interpretation of existing fundamental rights. For example, the various expansions of the right to life that emanate from Ar­ticle 21 fall in this class. The expansion of this article to include the right to privacy as a fundamental right has been hailed by activ­ists and intellectuals alike. But if one casts a glance at the original Constitution as it stood in 1950, one could scarcely imagine such a right. It is not that the right should not exist; the question is who should have the right to birth it. It is only fitting that Parliament should do the job. In this and many other examples, the court has come close to breaching the separation of powers. In recent years, this development has often been held as an unalloyed good by activists and intellectuals. In their imagination, the court is acting as a bulwark against a ‘majoritarian’ government. This is a myopic view that betrays a lack of faith in India’s democracy. One can ask a hypothetical question: How would these activists and intellectu­als respond when the judiciary administers the same medicine to a government of their liking, one that is endowed with ‘good qualities’ like secularism and a non-majoritarian character? They are yet to wake up to that question.

These are polarised times in India and the judiciary is un­likely to be viewed dispassionately. But in the 75 years since Independence, the institution has served the country well even if it has not escaped its share of controversies. It is hard to imag­ine the India we live in if Kesavananda, Maneka Gandhi, Minerva Mills, SR Bommai, Indra Sawhney and more did not happen. The Supreme Court—the beacon of the judiciary—is the great political equilibrator of our age.