Go to any museum or temple in India. Not one murti or figure from premodern India survives without disfiguration. If there is one, then the only explanation will be that it somehow escaped Muslim marauders 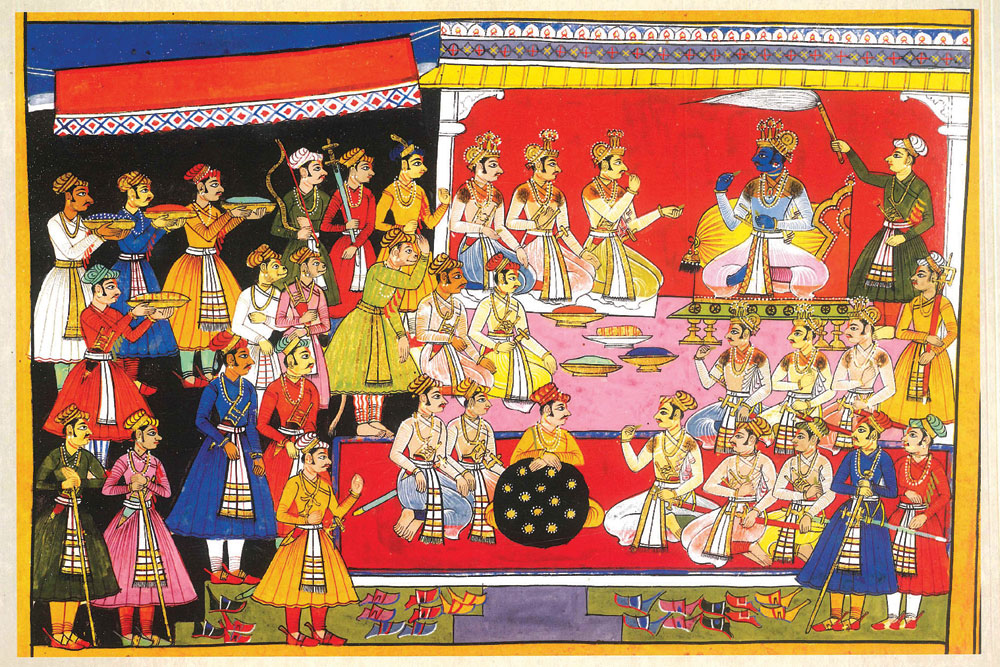 Ram has become the king of Ayodhya. After the ceremonies, royal guests are returning to their kingdoms laden with gifts as a symbol of his kingdom’s wishes (Courtesy:Ramayana, introduction by JP Losty and text by Sumedha V Ojha, Roli Books, 2016)


If I were a Muslim, I would be a liberal one. Especially if I were an Indian Muslim.

I would recognise and admit that I, along with most of my Indian co-religionists, were converted sometime in the last 800 years. My family would have its own memories and legends of this cataclysmic event.

It is probable that we were oppressed by invaders, offered a choice to convert or die. Or we were subjected to the dreaded jazia, the tax for non-Muslims under Muslim rule. Maybe we were too poor or too weak to resist.

Or we did resist, as did thousands of our compatriots. We valiantly fought the invaders. But we were defeated. As defeated people, we were subdued, subjected and, of course, converted.

Or we were members of guilds—weavers, carpetmakers, jugglers, artisans who converted en masse for patronage, because our livelihoods depended on our masters.

As it happened, ours was the religion of the conquerors. History is always written by the victors, not the vanquished. We the vanquished had joined the ranks of the victors. We had forgotten our pasts.

As an Indian Muslim, I would not choose to live in denial. I am, as my ancestors were, of this subcontinent. We were not Arabs, Persians or Central Asians. We were Hindus. Most of us. Now we are Muslims.

Why should we denounce our Hindu past? We decided to throw in our lot with India at Partition.

Coming to Ayodhya, as law-abiding Muslims, why should we dispute the verdict of the Supreme Court?

Why not have a Ram Mandir in Ayodhya? What is wrong with it? A Ram Mandir in Ayodhya would benefit all its citizens, Hindus and Muslims alike. It would become an international tourist and pilgrimage destination, adding to the revenues of the whole district.
In the building of the temple, thousands of workers, both skilled and unskilled, would secure employment, Hindus as well as Muslims. Similarly, shops, hotels, eateries, bazaars and other supporting systems would also thrive. Clearly, a win-win for all.

Who would object to such a temple? The Babri Masjid, now proven to be built on top of a destroyed temple, is not a sacred site to us. In fact, in Islam, believers can pray anywhere. Even the tombs of the prophet and his family are not sacred though worthy of respect.
As for mosques, they can be shifted and dismantled, if the need arises, as has been done in several countries of the Middle East, including Saudi Arabia.

In India, however, dargahs or hospises built on the graves of Sufis and saints have acquired a Hindu aura of sacredness.

But, clearly, the erstwhile Babri Masjid was not one of them. It was no place for pilgrimage or ziarat to devout Muslims. Instead, it was only a sad symbol of conquest, vandalism and religious intolerance.

As an Indian Muslim, I would support the Supreme Court verdict. I would be happy that Hindus would get their Ram Temple at last. We destroyed thousands of temples; they demolished just one.

I wouldn’t grudge them their Ram Janmabhoomi shrine.

I am not a Muslim. I am a Hindu. Do I have the right to imagine what a liberal Indian Muslim might think?

Yes, I do dare think like a Muslim, especially an Indian Muslim. Because I am a liberal Hindu.

As a liberal Hindu, I would urge fellow Hindus not to be needlessly aggressive or overly triumphant. No need to chest-thump or tom-tom the Supreme Court verdict. We cannot right the wrongs of the past. We must not write revenge histories either.
Why? Because our Gods are great.

When their temples and shrines are destroyed, they don’t cease to be.

Sometimes, they even vacate the battlefield to invaders and vandals.

Then we call them ‘ranchhod’, one of the names of Sri Krishna. It means one who leaves a combat.

But we don’t stop worshipping them.

Our Gods are patient. They don’t mind waiting it out. What is time to them? An aeon is a mere blink, nimesha, of Brahma’s eye. In the darkness that ensues in that tiny blip, a new universe begins to form.

Humans, Hindus and Muslims alike, are, in contrast, but mere mortals. A span of life of four scores and seven is considered a long one for most. It is we who turn impatient, even angry, when things don’t go our way within a specific timespan based on
our expectations.

But, as reported in his Complete Works, Swami Vivekananda saw a vision at Kheer Bhavani, Kashmir, that made him realise we don’t protect our Gods and Goddesses—they protect us.

Distraught by the wanton destruction of the Mother’s temple, Vivekananda thought, ‘Mother Bhavani has been manifesting Her Presence here for untold years. The Mohammedans came and destroyed Her temple, yet the people of the place did nothing to protect Her. Alas, if only I were then living, I would not have borne it, I would have protected the temple from the invaders.’

Then, he ‘distinctly heard the voice of the Goddess saying: ‘It was my desire that the Mohammedans destroy the temple. It is my desire that I should live in [a] dilapidated temple, otherwise, can I not immediately erect a seven-storied temple of gold here if I like? What can you do? Do I protect you or do you protect me?’’

The disciple who reports this conversation is also a liberal, modern Hindu. He is not afraid to voice his doubt, wondering if the Swami had been hallucinating.

‘Sir,’ he ventures, ‘you used to say that Divine Voices are the echo of our inward thoughts and feelings.’ Vivekananda replies gravely, ‘Whether it be internal or external, if you actually hear with your ears such a disembodied voice, as I have done, can you deny it and call it false? Divine Voices are actually heard, just as you and I are talking.’

This is what makes me a Hindu. Not just by birth. I am a liberal Hindu because I choose to be one.

We are not makers, only agents of history. We must do what we can, of course. But we must also see the larger design of the universe. In that design, we were defeated. Repeatedly.
We must accept that even as we try to recover from centuries of conquest and enslavement.

Along with millions of Indians, Hindus and non-Hindus, Ram bhakts and worshippers of other deities, I am so glad and thankful that Sri Ram will soon return to Ayodhya.

Like them, I pray that Ayodhya is once again restored to its original meaning as the city of eternal peace.

Lord Ram will return to the city he ruled.

No doubt, human beings are a flawed species.

It is we who break temples and monuments that belong to other faiths and communities. When it comes to the razing of the Babri Masjid on that fateful day, December 6th, 1992, more ink, I would hazard, than blood has been spent.

It was truly a defining moment for Indian secularism.

As it was for a whole multitude of Indian intellectuals.

For me, too, it was truly a turning point.

I was a Hindu, always, but as ‘secular’ as they go. I believed that many paths within many religious traditions are conducive to the realisation of one’s identity with the absolute.
I believed that all paths to the Divine are valid, even if they are not the same or equally so.

I also believed in the separation of church and state. In a modern democracy, the state has no business to adjudicate on matters of private belief.

When the kar sevaks brought down the Babri Masjid, I was shocked. It was an act unprecedented in the history of independent India. That it was illegal was indubitable. That the politicians, including the then Congress Prime Minister PV Narasimha Rao and the Leader of the Opposition Lal Krishna Advani, somehow connived to make it happen is likely.

Was this an act of Hindutva vandals? Many left-liberal secular academics thought so. Akbar Ahmed, writing on Bankim Chandra Chatterjee’s Anandamath (1992), said: ‘There is a direct causal relationship between Anandamath, written in 1882, and the destruction of the mosque at Ayodhya in 1992.’

But Ketaki Kushari Dyson, in a review of Julius J Lipner’s new translation of the text (Oxford University Press, 2005) countered: ‘Faced with this kind of reasoning, one could well ask whether in that case there was ‘a direct causal relationship’ between the Koran and the destruction, by Muslims, of numerous Hindu temples in India in the past.’

Travel anywhere in India. Or that matter what remains of the ancient world. Every pre-Abrahamic temple or monument bears the signs and scars of devastation. Catherine Nixey has convincingly shown in The Darkening Age: The Christian Destruction of the Classical World (2018) how Christians wrecked the great Graeco-Roman pagan civilisations, also smashed the Maya, Inca and other cultures of the Americas and Australia.

What was left of the classical world, mostly Hindu-Buddhist, was ransacked and ravaged by Muslims. Proudly. Muslim historians documented this devastation over and over again, in thousands of pages of boastful treatises and records.

Go to any museum or temple in India. Not one murti or figure from premodern India survives without disfiguration. If there is one, then the only explanation will be that it somehow escaped Muslim marauders. Otherwise, every single image, icon or building from classical India bears their signature. Broken noses, mutilated faces, chopped off arms or legs, damaged torsos.

We dare you to worship this insulted and defaced idol, say the iconoclasts. If your statue is indeed God, why doesn’t he or she respond when so mistreated or defiled?

Our Gods are silent.

They accept their abuse and damage.

Gods don’t care, but humans do.

A stock, stone or image is not God. But it represents God, something beyond human rationality or understanding.

Isn’t the Kaaba sacred to the Muslims? But it’s been attacked and broken many times. Few know that it’s just a mound of rubble and broken rocks encased in a beautiful black stone structure that pilgrims circumambulate.

Similarly, almost every major Christian shrine in Europe has been attacked, desecrated or destroyed. The Notre Dame still has lopped off heads of saints at its entrance. Moscow’s Cathedral of Vasily the Blessed, more commonly as St Basil’s, the onion-domed colourful national cathedral, was turned into a stable, full of horse dung, by the invading Napoleonic armies in 1812. Most of Germany was devastated by the World Wars.

But all of these places of worship were rebuilt. Painstakingly restored. In one great Muslim country, Indonesia, an ancient Hindu shrine, Prambanan (from the Sanskrit Parabrahman) in Yogyakarta, was rebuilt from rubble. Started by the Dutch colonialists in 1918, the shrine was opened to the public by Sukarno in 1953. Today it is a UNESCO world heritage site.
The Ram Mandir will be restored too.