The Order of the Victim

How the politics of inversion unites Putin and Imran 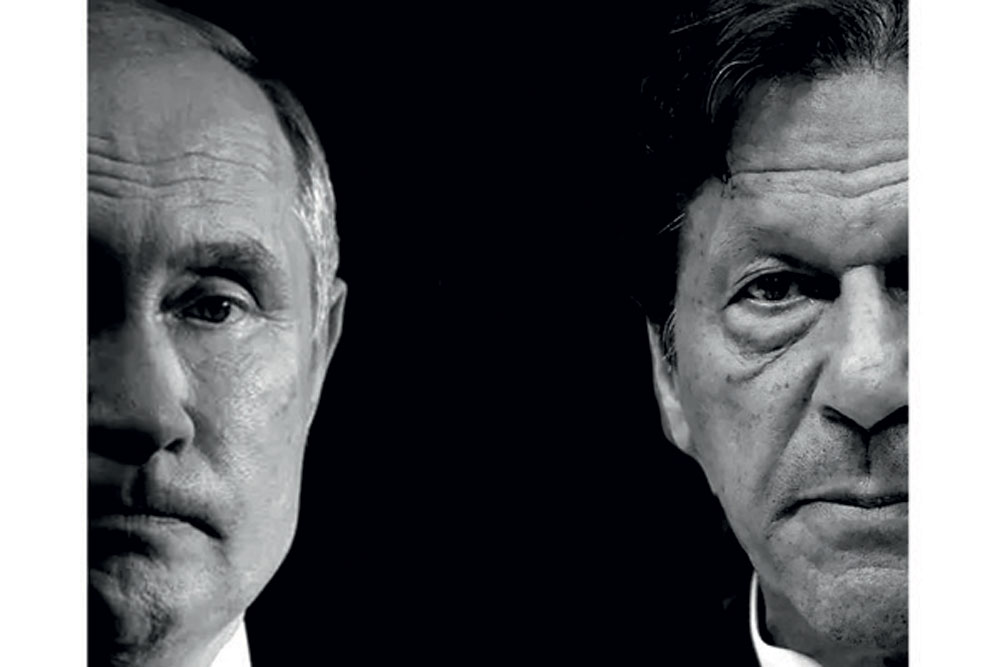 IN THE POLITICS of inversion, a warlord is not a warlord; he has been made inevitable by history’s biggest humiliations. He is not fighting a war; he is defending the fast-depleting greatness of a nation, its pride multiplying in isolation. What the mass graves reveal is not the genocidal fury of an autocrat frustrated by the resistance and resilience of a people led by the citizen-president; they are necessary monuments to the price the deviants, their souls corroded by neo-Nazism, must pay. He is not the conqueror reborn in the ruins of an empire, determined to rebuild what exists only in his hallucinations; he is the chosen redeemer, the last hope against the disease of democracy. He is not his own iconographer; he is venerated in the iconography of national resentment.

In his self-portrait, Vladimir Putin is the victim.

The politics of inversion is having a run in the subcontinent too. The prime minister who is struggling to retain power in Pakistan is not the man who is refusing to accept the simple truth that the generals alone decide on his use-by date. When he tells his story, it is a foreign hand that holds the sword over him. He is not the ruler sustained by the twin pillars of the Pakistani power structure, the military and the mullah; he is the people’s prime minister who has become the face of change, the choice of a nation consistently let down by the so-called democratic process. He is not one of those rulers blinded by their aura, steeped in self-righteousness, the most enlightened one, finding common cause with fellow me-alone leaders seeking a mandate for eternity; he is the servant of the masses restrained by extra-constitutional as well as extra-territorial powers.

In his hour of reckoning, Imran Khan, too, is a victim.

Putin and Imran are not alone. In the brotherhood of victims, the strongman draws his strength from the vast reservoir of national hurt. The 21st century strongman is not different from his predecessors in perfecting the politics of inversion: He begins with the promise of freedom, and he consolidates his power as the irreplaceable custodian of national honour by rationing freedom. He seeks eternity because his commitment to the restoration of national greatness is as granite as his hidden opponents’ patriotism is flimsy. The brutalisation of power is a historical correction, necessitated by the enemy. He sees the enemy everywhere, and the most formidable one lurks beyond the borders.

It is simulated victimhood that makes the strongman stronger.

And the enemy that the two most voluble victims of the day need most is America. For Putin, the war on Ukraine is a national rejoinder to the America-led West’s insensitivity towards the existential urgencies of the Slavic soul, which unites Russia and Ukraine. The disintegration of the Soviet empire was bad enough; what followed, to the horror of the Russian victim, was worse: the impulses of democracy aligning with anti-Slavic sentiments. The end of the Cold War gave the world a wrong winner—and a false sense of normalisation. It was as if history joined geography at America’s bidding to deny Russia the greatness it deserves. The Westernisation, Americanisation to be specific, of Russia’s near abroad was a threat to the nationalist instincts of an already diminished Russia. What Putin wants, and what he thinks America resists, is the Russification of Ukraine, not the Ukrainisation of Russia. Putin’s war crimes, from Russia’s official perspective, are the defensive measures of America’s victim.

The other victim, Imran, sells his condition with the rhetorical piety of a leader on the verge of a political breakdown. A Pakistani leader, an outsider who owes his political legitimacy to none but to his own legend, raging against the American overlord is a rare event, considering Pakistan’s old status as a frontline state in America’s war on terror. No one missed the paradox: Pakistan hosted the terror laboratories too. But the client state always valued transactional politics. Imran too values it, maybe he prefers holier transactions. Imran sees himself as a victim in the clash between pragmatism (as sanctified by Washington and the military establishment) and idealism (as epitomised by his own ideological purity). He is not just another elected leader who will be made redundant by the higher powers in uniform at an appropriate hour; he is the redeemer empowered by the resentment of the street. America’s proxies can’t defeat him; they can only bring him closer to martyrdom. He would rather enjoy the company of great anti-Americans like Xi Jinping and Putin than dance to America’s tune. Maybe the dancer just realised that tapping into anti-Americanism of the radical Islamist variety will make his victimhood more marketable.

In the politics of inversion, the victim has a story to tell.

And stories are useful lies.