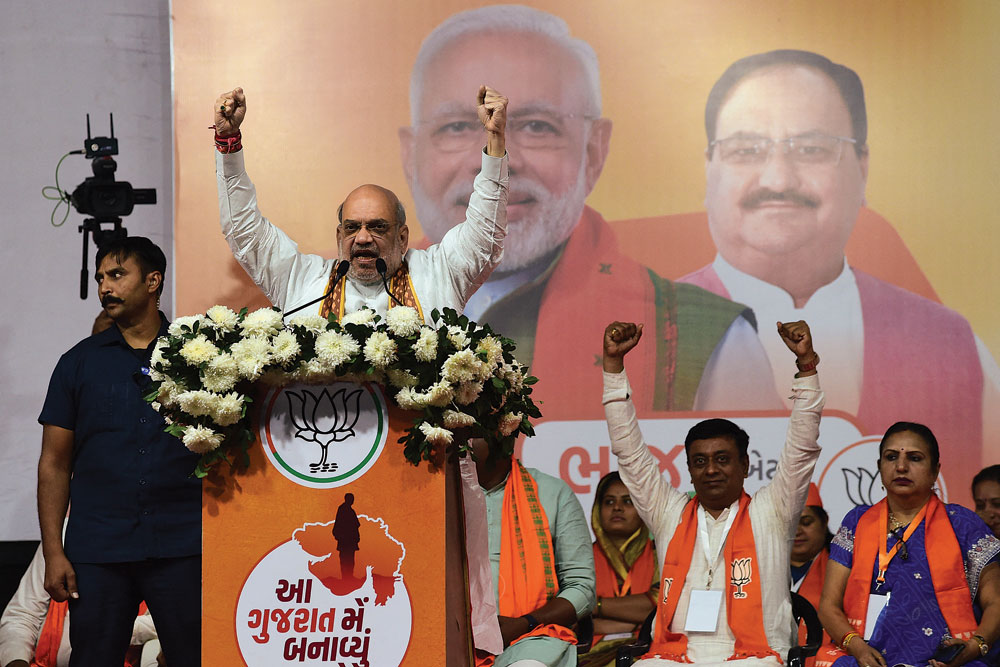 
IN 2017, THE COALESCING OF THE PATIDAR agitation, rollout of the Goods and Services Tax (GST), demonetisation, farm distress in Saurashtra, and slackness in the state administration after Narendra Modi’s shift to the Centre almost brewed a perfect storm. Strong support for the Bharatiya Janata Party (BJP) in urban centres saved the day for the party, which managed a narrow win. This time round, the gale force winds blew the other way and BJP scored its most emphatic victory, winning 156 seats (at the time of writing) across all regions. BJP’s 27-year-hold on Gujarat, with a brief break in the late 1990s, has been renewed for another five years, reflecting Prime Minister Narendra Modi’s enduring bond with the populous coastal state. If Gujarat did not let down its favourite son, Modi left no stone unturned in addressing rallies and capped his run through the state with roadshows that drew thousands onto streets, balconies and rooftops. The compact, if at all, has been strengthened with the sweeping leadership change effected by BJP in September last year receiving a thumping endorsement. BJP is now well placed to repeat a sweep of the state in the 2024 Lok Sabha polls which would amount to an unprecedented hat-trick in Gujarat’s electoral history.

The scale of BJP’s win replicated the party’s sweep of the Uttar Pradesh (UP) Assembly elections in 2017 when its alliance won 336 of 403 seats. By midday on December 8, the political map of the state showed BJP had more than made up in the Saurashtra-Kutch region where it had suffered major reverses in 2017. Further, it was sweeping tribal constituencies in northeast and southern Gujarat, barring just three seats where the Aam Aadmi Party (AAP) and Congress candidates were leading. The dominance in the tribal segment is particularly gratifying for BJP leaders since tribal areas have been a point of weakness and the party’s opponents have cited this as evidence that its social base is not inclusive. This time round, BJP picked leaders from the tribal community, including those who had won on Congress tickets earlier. The state government’s programmes have targeted the higher incidence of poverty among tribal communities, with officials pointing to the sticky nature of inter-generational deficits. The state’s tribal areas are difficult to access and while it is often argued that Gujarat’s record is ‘middling’, analysts often fail to see the improvements over time. BJP leaders spent considerable time fixing the political gaps in tribal-dominated seats and the results show that the efforts have paid off.

The dominant showing in Saurashtra is key to BJP’s big tally as the party worked to repair the damage it had suffered in 2017. It has brought on board several Congress MLAs who increasingly felt they had no future in the party, particularly with Modi establishing himself on the national stage. The sense of neglect among farmers that had resulted in anger against BJP was assuaged. A party functionary pointed out that five years ago leaders of local agricultural marketing committees had complained that neither ministers nor party notables had bothered to meet them to discuss their grievances. In Amreli district, BJP drew a blank and its overall performance was rescued by cities like Surat standing by it. BJP planners feel that given its support base and organisational strengths, the party could not fall below the 100-mark, irrespective of the prevailing sentiments. They also point out that the party has been able to maintain discipline in the ranks: it would not be surprising for cadres to become complacent and arrogant as was the case with the Communist Party of India-Marxist (CPM) in West Bengal where the Left Front won seven consecutive terms in office. Cases of high-handedness could not be ruled out altogether but it was clear that there was no anger against the party apart from regular cribs. During the 2017 campaign, Union Home Minister Amit Shah had pitched camp in Ahmedabad, meeting various social and economic groups. He had assured a nervous business community that it need not fear GST and the book work it entailed while reminding them that the alternative to BJP could be a government susceptible to community vote banks and weak on law and order. If businesses were vulnerable to crime, how could that be in the interests of traders, he had asked. He had also reminded them that GST would not go away if BJP did not return to office. But once the moment of weakness had passed, Shah had got down to work plugging gaps in communication and policy implementation. This time too, he met a large number of community leaders, apart from campaigning vigorously.


THE VOTE SHARES MAKE IT CLEAR THAT WHILE the entry of debutant AAP has hurt Congress, it has not made much of a difference to the results. AAP has garnered around 13 per cent of the vote and Congress 27.3 per cent. Even when added, this is almost 13 per cent less than BJP’s, which has recorded wins across all regions in Gujarat. AAP’s claims to being an alternative to BJP and its promise of free electricity and water, schools and hospitals, along the lines of the “Delhi model” failed to convince voters. The section of voters that might have considered a change was left unimpressed by AAP’s agenda even as Modi’s attack on freebies (“revdi culture”) was a bold counter to populism. AAP was a talking point but for entrepreneurial Gujaratis, the party lacked both a grassroots presence and ideas that might have made it a more serious contender. Delhi Chief Minister Arvind Kejriwal sought to criticise BJP for planting a puppet chief minister in Gandhinagar with Modi and Shah controlling the strings from Delhi. But the strategy was misplaced as the distinction does not carry weight with voters. The prime minister is synonymous with the state and often invokes “Gujarati asmita (pride or self respect)”. In fact, criticising Modi on this ground is counter-productive. Similarly, Congress leader Rahul Gandhi, who mostly gave campaigning a skip, was pictured with anti-Narmada dam activist Medha Patkar on his Bharat Jodo Yatra. This was promptly seized on by Modi to tell voters that they should not elect a party that supported “anti-Gujarat” interests. This was not just rhetoric. Voters in areas that received Narmada waters enthusiastically backed BJP. AAP made a similar mistake when it chose as its state chief an individual who used derogatory language for Modi and was found to have associated with politically activist NGOs that had campaigned against the prime minister after the post-Godhra 2002 riots. AAP did put up a ‘local face’ for chief minister but much of the damage had been done by then.

The dictum that generals often fight the last wars can apply not only to politicians but also to commentators explaining the Gujarat results as the success of ‘Hindutva’ politics and communal polarisation. Yet, there is no explanation why such polarisation should hold voters in thrall election after election if commonplace necessities are not met. The unemployment rate is lower than most other states, hovering around the 2 per cent mark. Overall, the state provides employment to people from many other states and the accounts of Gujarat’s progress carried by migrants to their home states was a reason why Modi’s fame spread and the Gujarat model came to be discussed. Importantly, BJP has been able to present a roadmap of continuing prosperity and progress with a pledge to bring business and enterprise dealing with new technology to the state. Modi’s inauguration of Modhera as India’s first solar-powered village, electronic and pharma parks, educational complexes for underprivileged sections and several irrigation projects was part of this commitment. BJP is not shy about its advocacy of Hindu cultural values and promotes a ‘nationalist’ viewpoint at odds with left-influenced scholarship. But it will be naïve to attribute its continued political success solely or even largely to religious mobilisation. Gujarat’s voters need a convincing and credible alternative before they consider switching allegiance while BJP, for its part, strives to meet rising expectations.

While Congress’ footprint has shrunk and AAP has failed to impress, BJP has brought about a major generational change in leadership and ensured that displaced seniors did not turn into dissidents. This was no mean achievement given that rebels and unabated factionalism appear to have played a role in BJP’s loss in Himachal Pradesh. Despite decades in office, the party has not plateaued and remains an agile outfit that willingly embraces change. With the manner in which it has fashioned its victory, the state BJP has shown a winning model for innovative units struggling to consolidate electoral gains. The party’s electoral machine in Gujarat displays a relentless intensity that begins planning for the next election almost as soon as the victory drums fall silent.