What really matters is the passion quotient 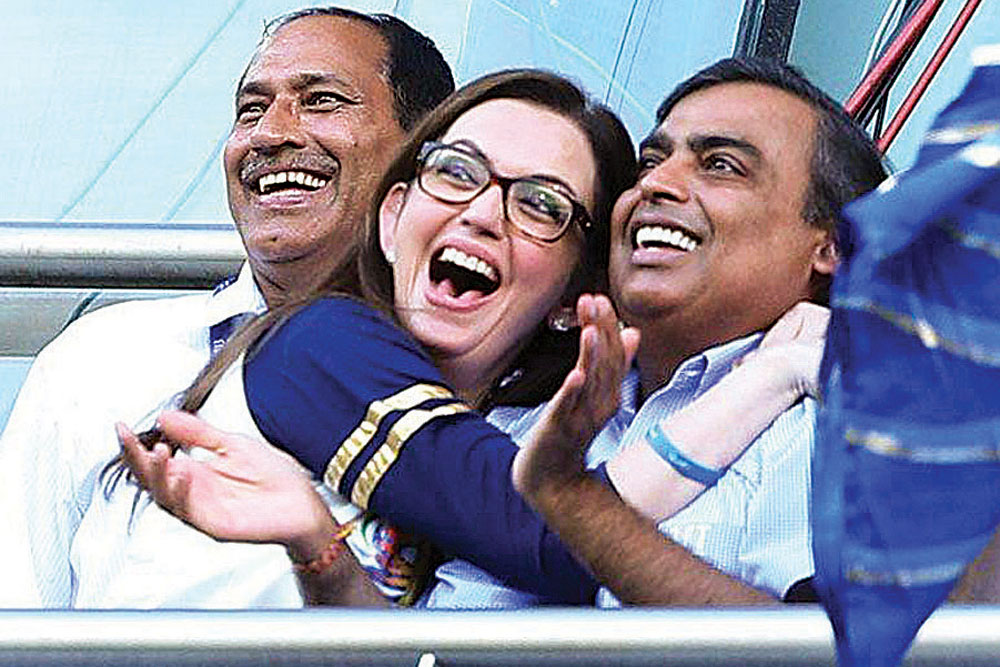 Nita and Mukesh Ambani cheer Mumbai Indians at the Wankhede Stadium, May 5, 2013


LAST WEEK’S IPL auctions have clearly established the worth of the Indian Premier League (IPL) both as a league and also as a brand. The auctions point not just to the belief that some of the smartest corporates have in this brand but also tell you a story of sport in India, coming of age. Combining valuations with sporting heft.

I am no lover of cricket. But I am a great believer in brands. From the prism of branding, IPL has been an unequivocal success from the moment it began. It had all the ingredients of being both risk-proof as also too big to fail. It was a blend of what moves India: cricket, commerce and entertainment, and the way the initial teams were formed with their respective owners, it was clear that IPL was a brand that would last and stay the course. And it has. It gave the consumer the twin avenues of attractiveness and value-for-money. The format may have rankled some of the purists but then the game, and the way it was presented, crossed that barrier with ease.

Brands are ultimately about benefits. You don’t buy Surf. You buy the whitest wash. It so happens that of all the brands that occupy your mind space, Surf is the one that comes out on top when it comes to looking for the whitest wash.

Likewise, IPL was never (and is not) about cricket. It was about entertainment. Entertainment delivered through cricket. Cricket was the medium and not the offering. And this is why it has stuck and is seen as a valuable entity to both owners and audiences alike.

IPL today is aspirational and entertaining. But most importantly, non-threatening. It is far removed from national fervour; it does not suffer from either jingoist strains or performance pressures, except of course for the owners, and the owners too are financially cushioned because of what the Board of Control for Cricket in India (BCCI) ploughs back to them in terms of sharing broadcast revenues.

I don’t know a lot about the CVC firm that won one of the franchises last week for the IPL but I do know about the RP-Sanjiv Goenka Group (Open is owned by the RP-Sanjiv Goenka Group). I have had the privilege of growing up in Calcutta and seeing close at hand what the Goenka family has contributed to both its cultural as also sporting landscape. Rama Prasad Goenka was a true visionary and in Sanjiv Goenka, the apple hasn’t fallen far from the tree. Today, Sanjiv controls businesses that serve consumers at many touchpoints: be it utilities or music or films or for that matter retail. Hence, a cricket franchise such as IPL would not only be a logical buy but also a great brand enhancer. And when you amortise the costs over a 10-year period, it’s a non-sequitur.


Here too, Sanjiv Goenka is following in the footsteps of some of the smartest people in business. Mukesh and Nita Ambani have turned Mumbai Indians into a powerhouse. As has Shah Rukh Khan (whose business prowess is no less) with Kolkata Knight Riders. With all the brouhaha over Royal Challengers and its erstwhile owner Vijay Mallya, its current owner Diageo has thought it prudent to continue with the franchise.

Which brings me to the next point, Brands outgrow ownership. They ultimately belong to the consumers both emotionally as also transactionally. Hence ownership is not about control or power: it is about the passion quotient of both the owner and/or the manager of the brand.
In this too, I see great advantages in the ownership pattern of IPL teams. These folks have both the staying power as also a long-term commitment: the IPL teams are not their primary business. Which is why they can, if they wish, be more risk-taking as also innovative when they wish to be.

Brands survive when they are relevant and rewarding to use. They also evolve with consumer behavioural evolution. It is imperative for brands therefore to not only satisfy and meet consumer needs but equally predict future patterns. The manner in which the IPL has metamorphosed over the years is a testimony to the brand’s listening power.

MANY SO-CALLED EXPERTS have commented on the high valuations of IPL teams: What value would you put to a Coca-Cola, or for that matter to a Jio or even Amul? One is the fiscal whilst the other is what I term potential value. Not what analysts call future earnings. The common mistake many make while commenting on the IPL is talk about an exit plan for owners. I don’t believe any of them wants to or even needs to. For some, it’s a hobby and for the others it may even border on vanity. The price becomes relevant only when there are sellers and buyers. The resilience of the IPL brand as also its enduring popularity suggest that owners wish to hang onto the property they have tirelessly created.

When the history of Indian Brands (or Made-in-India) is written, the IPL will find a place at the high table. Its reach and magnetism is a draw beyond the shores of India.

IPL is both borderless as also non-threatening, the hallmark of any successful global brand. I also believe that over time, the lessons from this IPL will encourage sports administrators to look at brand extensions

Its essential DNA is one of entertainment bereft of national passion or national anger; the ecosystem is one that breeds entertainment. Hence, it is both borderless as also non-threatening, the hallmark of any successful global brand. I also believe that over time, the lessons from this IPL will encourage sports administrators to look at brand extensions, be they gender-driven (IPL for Women) or category-driven (football and kabaddi are prime examples): this will augur very well for India and its sporting ambitions.

As I look back at what this brand set out to do, and what it has achieved, it tells you yet another story of great brands. They often have a life of their own and carve their own destiny.

Sometimes, the best brands take you by surprise because if they didn’t, they would not be memorable enough!