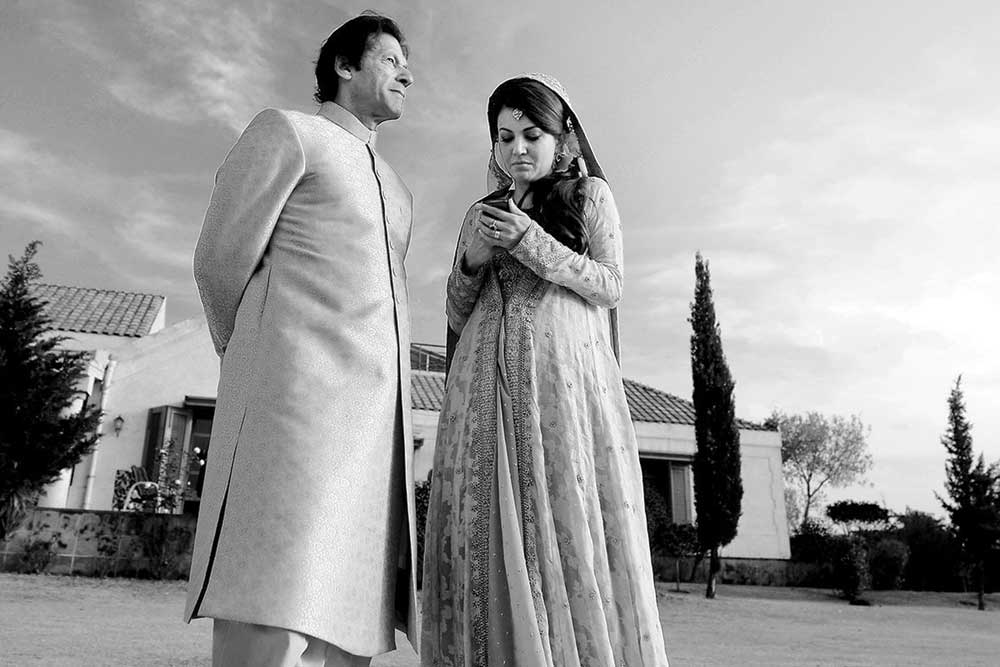 Marriage between any two people is a complicated business. Marriage with a celebrity can be even harder, as there is now a third party involved, the public. And marriage with a celebrity that combusts is, of course, the stuff of tabloids. Now we have not a headline, but an entire book that chronicles every twist and turn of Reham Khan’s life in Reham Khan (SK Publications; 548 pages; £17.99). Released in the UK on July 9th, its Amazon page in India no longer exists. The description of the memoir on Amazon UK is intriguing, as Imran Khan, chairman of the Pakistan Tehreek-e-Insaf (PTI) party, is not mentioned once. While he is, of course, the throbbing centre of the memoir, as Imran and Reham had a 10-month marriage in 2015. The release of the book is perfectly timed with Pakistan’s general election, with Imran Khan in the running to become the next prime minister of the country. As Zahid Hussain writes in Dawn on July 18, ‘The PTI certainly stands a chance of scraping through to the pedestal in what are being described as one of the most controversial elections in the country’s recent history. It is the best and probably the last opportunity for Imran Khan to fulfil his dream. But there’s still a long way to go before the final lap.’

This chronicle has certainly fuelled more controversies and potholed Khan’s final lap to the finish line. This is a book which uses expansiveness instead of brevity, forgetting that not all of life’s anecdotes must be rendered onto the page. Not every memory must be transcribed for posterity. Readers will wish an editor had taken the delete key and erased pages of irrelevance. The autobiography is completely devoid of the ‘gift of hindsight’. Reham uses the writing to gild herself, not introspect. She does emerge as a strong and fierce mother of three (Sahir, Ridha and Inaya), a role she adopts with power and grace. Her independence and doggedness cannot be questioned. But as a reader, one’s respect for her often turns to peevishness, as there is too much finger-pointing and chest-beating and too little self-reflection.

Jemima Goldsmith, former wife of Imran, had promised to sue Reham if the book came out. But with online versions easily available, the damage had already been done. Jemima was only 21 when she married a 43-year-old Imran. Reham concedes, ‘For Jemima, marrying a much older man from another culture couldn’t have been much fun. I could very much relate to a very young girl separated from all of her friends and surrounded by much older people in an oppressive atmosphere.’ But beyond that, she hardly spares a warm thought towards her. She sees her as the interfering ex-wife who still lords it over him, and Reham happily includes details about Jemima’s table manners and libido (or lack thereof, according to Imran).

From Reham’s account, she has enough reason to raise cudgels against Imran. She portrays him as a man who took advantage of her trust and intellect, quickly tired of her, philandered, and plotted to get her out of his life. She feels he was motivated by jealousy and insecurity over her rising popularity.

Sensational and salacious details pepper the narrative. She paints him as a spineless, coke-snorting, work-shirking, miserly laggard and womaniser, who cannot read Arabic and does not know the Qur’an. In her words, his life is ‘drugs, sex and rock ‘n’ roll’, not the best tag line for a presidential candidate. In her eyes he is a wastrel who dabbles in voodoo and the occult.

‘He would make at least three trips to the bathroom every night, and return more hyper than before… It appeared that Imran was doing about six grams a night’

She recounts one particularly damning incident: ‘On a day in November, I’d walk into the bedroom to find my new husband lying naked on a white sheet, rubbing kaali daal (black lentils) all over himself. He laughed in embarrassment as he rubbed them on his genitalia. He then stood up and shook the lentils onto the sheet for Anwarzeb, the home help, to take away. I stood there in shock. Imran explained that Ahad, his brother-in-law, had brought a man with him who had recommended the treatment because he believed someone had done some black magic on Imran.’

She sets herself up as the good Muslim who follows a code of simplicity prescribed by Sharia. She writes that for her and her family, ‘No practices falling in the sphere of Biddah (heresy) are practiced. Even the concept of 40 days of mourning after a death, is frowned upon. Superstitious practices or magic is strictly forbidden.’

Reham often uses Imran as a foil to show his failings, and her principles. When it comes to parenting, relationships, attitude to money, work and even the country, she indulges in a game of one-upmanship. When it comes to political acumen, she accuses him of ‘putting all his eggs in one basket’ and ‘dreaming like a milkmaid’.

Her few choice descriptions include:

‘If there was ever a man who could not deal with pressure, it was Mr Imran Khan. I was shocked at how easily he would crumble. It would take almost nothing for him to fall apart.’

Reham says that while she comes from a conservative background where people believe in fidelity and monogamy, Imran has a penchant for multiple partners, sexual banter and beauties who like to get slapped. Imran confesses to Reham that Tyrian White is his love child.

She writes: ‘After a few weeks of our marriage, as we discussed Tyrian, Imran casually added, “You know she isn’t the only one I have.” He grinned mischievously.

“What? You have five illegitimate children! How do you know?” I asked.

“Well, the mothers told me,” he said.

His insouciance about having spawned (and abandoned) multiple progeny across the globe is unlikely to win him much favour, whether it is with partners or voters.

But Reham’s fault-finding also gets tedious as she draws odd parallels with how much time she and her children took to name their dog Maximus, while he heedlessly called his own dog Motu. The battles between the two dogs plays out like a saas-bahu serial on the page. She also mentions that the first time she met Imran for work, she also sees ‘this beautiful Alsatian’ called Sheru that had belonged to the ‘former president and dictator of Pakistan, General Musharraf’. Imran got the dog after Musharraf went into self-imposed exile. She noticed that the dog was hobbling, but Imran did nothing about it and the dog soon died because of an infection caused by an embedded porcupine needle. Even in benign situations such as these, she loses no opportunity to take a swipe at him.

His drug habit is also spelt out line for line: ‘He would make at least three trips to the bathroom every night, and return more hyper than before… It appeared that Imran was doing about six grams a night.’

Forty-five-year-old Reham has had an eventful life in itself, even if it didn’t involve drugs and sex. But if there were no 10-month marriage to Imran Khan, there’d be no book that was the talk of the town. Ethnically of Pashtun origin, she was born in Libya to a well-respected and cultured family. She was the darling of her father, and shared a special relationship with him. She describes her childhood as one of privilege and joys. Her early years were in Libya, where her neighbours were Hindu, and where her mother taught her to respect different religions. With her elder sister of marriageable age, they returned to a Pakistan under the military dictatorship of Zia-ul-Haq. Peshawar started to change. She writes, ‘The fabric of society had changed, perhaps irreversibly. My mother recalled how as teenagers in Peshawar it was possible for them to walk on Saddar Road without a chadar. But post-Zia, everything was different. My nephews from Islamabad would ask if there were any women in Peshawar, as they never saw any.’ But even in a new country, Reham remained a popular and confident child who was both a know- it-all and the class prankster.

While her sister and friends got married at 25, suddenly 15 became the norm. As a 19-year-old she was married off to her 33-year-old first cousin. Her first marriage was a disaster; the British psychiatrist Ijaz ur-Rehman, who referred to himself as ‘Rayman’ was an alcoholic and abusive husband and father, who did all he could to ‘tame’ his wife. She writes, ‘I had married beneath my social class. Soon after we got married, my husband, annoyed by my well-heeled look, took me shopping; a pair of trainers, so I’d keep up with him, coupled with a T-Shirt and jogging bottoms was my only outfit for the rest of the year.’

Obsessed about building a White House in Pakistan, he gave no money to his wife in London. He’d shove the baby under a running tap to stop him crying. He once poured a bottle of colic medicine down the child’s throat and would have choked him if Reham had not intervened. A man of blistering rage and boiling tempers, he drove off in a new city leaving his wife and child to fend for themselves. In 2005, despite opposition from her own family, she filed for divorce.

Through these hardships Reham emerges as a woman of fortitude and courage, who as a single parent in the UK carves out a broadcast career for herself. Struggle marked every step of the way, as she hustled to provide even the basics for her children, like heating and a roof over their heads.

Her difficult first marriage did equip her for the rigours of the second, but not for its disappointment. She married Imran not as a teenager against her will, but as a mature woman aware of her own agency. In Reham Khan, her faith remains steadfast through her turmoil; in religion, she finds her strength. She signs off not as a wife or ex-wife, but a woman forging ahead. She writes, ‘Gone was the ladylike restraint my mother had taught us. No longer did I sit demurely. I sat more confidently. I occupied the space around me boldly. I spread my arms out wide and fearlessly. I left the self- consciousness that is drummed into girls. My body language had changed completely. I was a woman reborn.’ 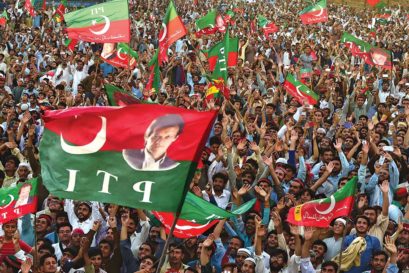 The Bloody Biography of Change

By all accounts, India is not a factor in the election. Is this because the consensus on India is so strong across Pakistan’s political divides that no party gets extra mileage by wrapping the flag around itself? 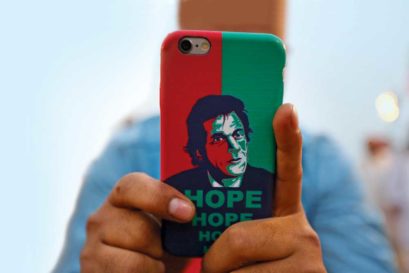 Imran Khan and the Struggle for a New Pakistan

Imran Khan is hopeful of winning the Pakistani General Election on July 25th. Despite his legendary U-turns and his never-changing mantra of ‘me-myself-I’, there is one thing that remains unquestioned in an environment where corruption is a way of life: his financial integrity. He is many things but he is not corrupt. And Pakistan is everything for Imran Khan