What is captivity to a living being? Is it only an animal in a zoo that suffers? Or do wild animals feel captive in the wild too? 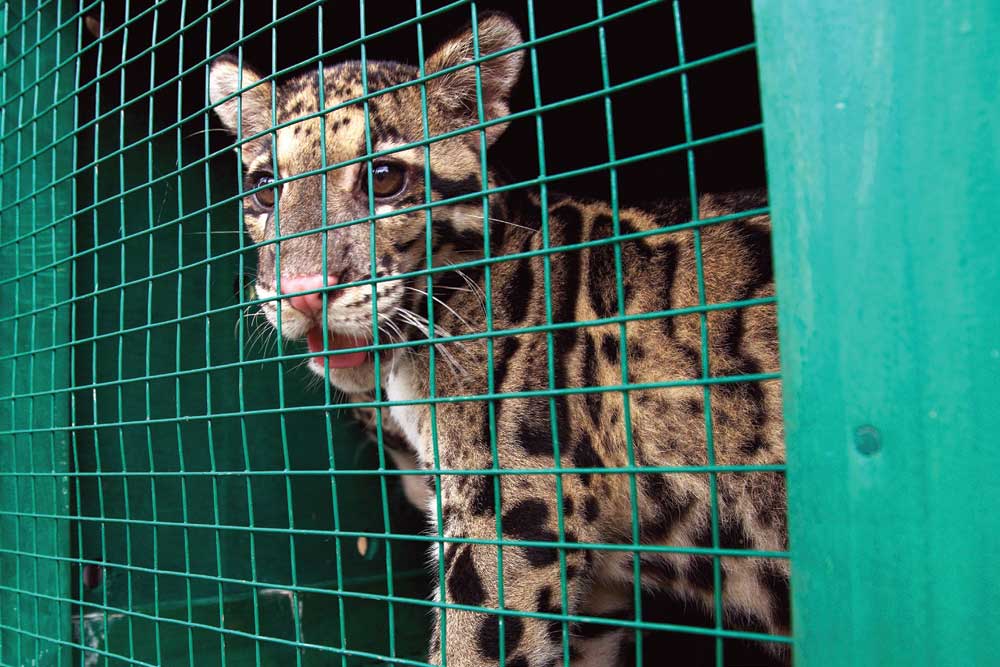 THERE IS nothing like a caged animal to evoke sympathy. Or it could evoke the very opposite feeling, that of cruel dominance and pitiful loathing. If the two did not occur alternatingly in the human species, sometimes even together in one being, there could not have been the mad adrenaline of Roman amphitheatres with animals being confined and killed for sport. If the latter emotion were absent in the human species, I would have missed the horror of seeing a pink-shirted young lout stubbing a cigarette out into the dreamy eyes of a silver pheasant through the bars at Delhi Zoo. This was many aeons ago, but not long enough for me to have forgotten either the colour of his shirt or the incredible horror I felt in being witness to a senseless mutilation. Young blood had boiled over and I clobbered him before hauling him over to the then director, a small sagacious man who immediately confirmed that he had no real official power to be an enforcer. But I could do things, he suggested, for, after all, I represented the youth and thus had more power than him. In the longer run, I could run a youth wardenship team for the Zoo. In the shorter term, I could drag the yokel off to an empty cage that adjoined the one the chimpanzees had and lock him in it for half an hour. The officer, in those days when animal welfare laws were rather ill enforced, had also hit on the same theory that the Romans had. Cage the man and gloat in dominance. As the chimpanzees hooted with excitement and drew close enough to breathe a fetid cloud of vapour onto the terrified man’s face, I watched with pitiful loathing. In this case, Indian law did not allow for the story to end in bloodshed. But, what did that silver pheasant feel, through its searing single eye behind those bars? What did the tormentor feel, not knowing that the chimps could not really get at him but knowing that he was captive and could not run away from his punishment? And what did the chimps feel as they closed in, captives themselves but with a tiny opportunity of deviant entertainment?

What is a cage? What is captivity to a living being? How does an animal suffer when caged? I have asked myself these questions over and over again. Do all animals suffer the same in captivity? I remember vividly the story of a small carnivore in a Gerald Durrell book that I had read when I was a boy. The animal, captured by Durrell’s team in the tropics, was shipped in a crate to England for captive breeding at the world famous Jersey zoo. Upon arrival, a spanking new enclosure was ready for the inmate, designed using modern scientific reckoning of what the animal would need in captivity. And yet, the creature refused to come out his crate even when offered all the luxuries of planned captivity. It felt more secure wrapped in its own odours and scents and the soothing familiarity of its small enclosure. Was it any different than the elephant that I saw shipped from Thailand to a zoo in Australia where the then minister proudly showed me around and said that they had spent a million dollars to refurbish the exhibit for the animals? Imported tiles from Thailand, a brand new paddock that had the best safety equipment for the keepers, all this and more were in place, he said. The elephant, though, bobbed its head up and down in a perfect psychotic symptom borne of solitariness. How could I communicate this to the politician who was already planning how various other captive elephants could be brought in from different zoos to make the newcomer feel comfortable? “Do you have many friends in parliament, minister?” I queried on impulse. “Oh yes, I do,” his eyes gleamed, “I count many of them my friends and nearly all of them my acquaintances.” “Oh well, in that case, I could put you and any three of them in a room and you would be family, wouldn’t you?” I was not in an indulgent mood that afternoon. “Good God!” he said as the thought sank in, and he sank down on a settee just as dramatically “Can’t tolerate them for more than half an hour at a time!” Surely not, I wanted to say, and neither can elephants create an instant family. The fact that the elephant was suffering was clear, but did it suffer more or less than the caged ferret? Do certain animals have a cognitive ability to suffer more in captivity?

Switch to another scenario. Is it only an animal that finds itself in a zoo that suffers? Or can wild animals feel captive in the wild? I was in Ranthambhore National Park a few years ago, stuck in a tiger jam. Not the sorts sold illegally in Oriental medicine shops, but a traffic jam involving tourists in a packed melee all out to see a tiger: in this case, a hundred or so tourists viewing a tigress from the safety of a semi-circular ring of safari vehicles, and in doing so, blocking the cat from accessing the tall grassland on my left. But, surely the tiger could just reverse and stalk away, ignoring this silly human phalanx. It was not quite a chakravyuh, was it? I suppose it could have done so, but trapping it was maternal instinct. What the excitedly jabbering, finger pointing, tyre squealing, engine rattling juggernaut was doing was blocking it from accessing the grasslands where its two young cubs crouched, apparently frozen by human conduct. The tigress was weaving this side and that, looking for just a small opening to rush across. Its muscles taut, rumbles from her throat indicating displeasure and it tail twitching like a cat who got stroked the wrong way around, she waited for close to five minutes. And then, when all else failed, she let out a roar. From the cavernous pink mouth emerged a sound that rent through the phalanx. The jeeps skittered away in fear. A few women screamed lustily. The intrepid photographers in the group clicked in frenzy. And the tigress, captive in the wild, streamed through, her streaks blurring in the frames of the camera set on high ISO. That was freedom, from captivity, of another kind.

This happens not just in Ranthambhore and not just with the tiger. It is not just the normal ‘badly behaved Indian’ that indulges in temporarily holding a wild animal captive. I have seen a beautiful blue whale being harassed by charging tourist boats off Mirissa in Sri Lanka, a herd of bison being surrounded by vehicles in Yellowstone in the US, and several other such instances in Africa and Latin America.

This form of captivity is not quite the barred variety, but can still be easily understood, as it affects an individual. But what of captivity in the wild of a more permanent kind that affects a whole population of beings? What when the last migratory corridors that elephants need to move back to their habitat have been cut off by the National Highway Authority forever? What happens when villagers, in search of new jhum lands, fell an entire forest, in the process breaking canopy connectivity of arboreal creatures like Hoolock gibbons? Stranded on a lone fig tree, a family of gibbons have the options of singing woefully and dying of starvation. Or, the more adventurous ones have the option of coming down on their spindly legs, long brachiating arms raised asunder like surrendered terrorists and wobbling towards the nearest tree they can find. Chances, of course, are that a stray dog would find them first and finish them off. Or a child would throw a wicker basket over them and keep them temporarily as a pet in their homes. Which captivity would the gibbon prefer? Would they prefer to sing woefully in the wild and die or to wail in human habitation?

The cage is what causes captivity, but what constitutes a ‘cage’? It is time that we as a society examine the socio-cultural, ecological and psychological definitions of a cage. In doing so, we could stumble on the factors that can engender welfare of animals both in the wild and in our midst. In a nation that oft quotes the Mahatma, his view that “the greatness of a nation and its moral progress can be judged by the way its animals are treated” can actually be practised. In doing so, we might also unlock an understanding to our own forms of captivity. And from this could emerge an understanding of our own suffering and pathos as a species.