The unique parental role of the male hornbill 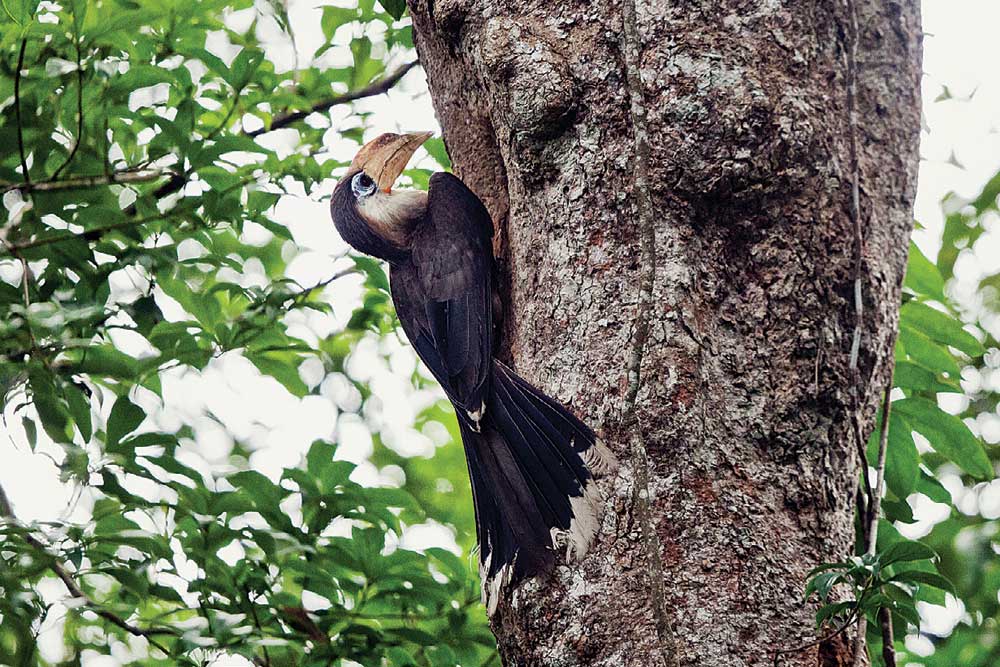 I AM BIASED, let me admit, being a man schooled in the ways of elephants, towards the criticality of the matriarch in the task of parenting. Among elephants, the man is not part of parenting. The bull does not spend even the teeniest bit of his time in caring for or bonding with his offspring. A dominant bull comes, woos, mates and goes his way. He may remain with his chosen lady for a couple of days, but after his shows of affection and passion, he just departs. Ripping apart brakes of bamboo in his hurried departure, he leaves his post-coital glen with never a backward glance. The lady goes back to eating grass, ripping up turf, whacking the dirt globules away from its green foliage and then munching mouthfuls in apparent contentment. There seems to be no expectation from the father-to-be and perhaps evolution has taught the cow elephant the folly of trusting a musth male with something more onerous than two minutes of lovemaking. The mother-to-be will now spend the next two years of her life bearing the baby and then another ten in rearing it. The entire joint family of related females assists in the rearing process. The bull, if it enters the periphery of their clan once again, is reserved only for renewed passion with whichever female is in oestrus. That is the way of elephants, where concepts of feminism and equality have not been favoured by evolution. It is in this context that the onus hornbills place on cooperative rearing seems a tad elaborate.

But first, a bit more about the rather unique family of birds that are called hornbills. “Toucans!” a lady in the front row at India International Centre declared definitively when I was putting up a hornbill photo. I explained to her and the audience the differences between the two. Hornbills are an Asian and African bird closely related to kingfishers and bee-eaters, while toucans are Latin American and related to woodpeckers. Hornbills have a casque on top of their bill and their top two neck vertebrae are fused; in toucans, they are not. The two are good examples of convergent evolution; how two unrelated creatures have superficially become similar looking because of the ecological niche they occupy. “So, that is what I said,” the lady declared triumphantly “They both look the same. They are toucans only!” The one thing I could have said to that retort is that by using such convoluted logic, hornbills and elephants are similar too. I mean, their early ancestors seem to have evolved in Africa about 50 million years ago and they both possess eyelashes. In fact, I can’t think of a single other bird, other than the hornbill, that has eyelashes. The hornbill is also the largest resident forest bird of the Asian and African forests, just as the elephant is the largest resident animal of such forests. But with that, the similarity stops.

Hornbills are easily recognisable because of their magnificent, mostly hollow headgear balanced rather clumsily on their long bills. There is little to suggest that the large ‘horns’ on their bills have any function other than to dazzle females with, perhaps a little use in aerial jousts between rival males, and in some, a resonating chamber for their loud calls. In many ways it is very like a peacock’s tail or a human woman’s sari, a long, cumbersome adornment that serves largely to bedazzle. This is further borne by the fact that the bird itself is rather tamely coloured, in blacks and whites or browns; the beaks and a patch around the eye and the neck are the only parts that are brightly coloured. Many species have fleshy wattles hanging around their necks. All of this makes for a very distinguished look even to us non-hornbills, let alone other potential avian mates. And they are large, big enough to be noticed by even a non- birdwatcher. When a group of hornbills fly to roost, the flaps of their wings can resemble the thrum of a torrent of water. There are many a days that I have woken up at the hilltop rest house of Mothonguri in the forests of Manas to what I thought was an approaching storm, only to see a steady flow of Great Hornbills fly past in regal gold and black. At other times, waiting at the old fig tree in Pakke in Arunachal Pradesh, I have witnessed more than fifty wreathed hornbills fly into a single tree for the night. It is like a very busy airport with half a dozen planes landing on different strips all at the same time. The accompanying noise is an un-orchestrated medley of whooshes and grunts that completely envelops the soundscape of the moment.

What the tribal Nyshi in Pakke finds irresistible about hornbills is its beak. Not on the bird but as customary adornments for men’s headgear that robs from the bird but confers on the wearer the same evolutionary strategy: the ability to bedazzle more females. This is not just Nyshis. Nagas kill the Great Indian Hornbills for their tail feathers, Borneans kill the Helmeted Hornbills for ivory (the only solid casque that any hornbill species has) and Papuans kill their hornbills for both feather and casque. But what makes the Nyshi case special is the work that a few enlightened Nyshi youth undertook to change that custom. At the Wildlife Trust of India, we helped them in making artificial beaks, first mimicking real beaks to a ‘T’ and then making more popular garish orange versions. The latter seemed to attract a lot of female attention for young Nyshi males, and the need to kill hornbills in that part of the world has decreased. Other researchers started nest protection schemes and the tribe that killed hornbills for enhancing their manliness turned to protecting them from unscrupulous hunters.

A FASCINATING STORY, no doubt, of human greed and atonement, but what has captivated me the most about hornbills themselves is their breeding strategy. Now, there are a number of dedicated mothers in the animal world. From wormlike caecilians which allow its young to feed on its own skin, to an octopus which guards the nest and feeds her 100,000 or more offspring while starving herself. Male seahorses take on the parenting role seriously too, brooding the eggs in their own belly and becoming the only known case of male pregnancy! The hornbill does something unique, though. The female incarcerates herself for a hundred days or more in a small, austere tree hole. So small in fact that she sheds most of her flight feathers and tail to fit into a natural cavity or one that was once dug into the tree by a woodpecker or a barbet. The hornbill’s beak, as we have established before, is not of much utilitarian value. The choice of hole takes many days with both parents engaged in much debate and squabble in finding the right place. Once chosen, the pair seals it off with dung and mud and fruit pulp, leaving a hole big enough for the female to enter, and into this monastic solitary confinement, the female recedes willingly. The male has then the unique job of plastering the hole up almost completely leaving only a beak-length slit open. This small opening to the world is the only way the female can breathe inside her cell, and on particularly hot days, you can find her with the tip of her bill outside the hole, soaking up a passing gust of air. More critically, this opening is what allows for the exchange of nutrients as well. The male brings food back for the female every couple of hours, throughout her imprisonment. In many species I have seen them come every 90 minutes. The food consists mainly of figs and fruit but an occasional insect or other protein snack is also presented. At first nesting, the father has to do all this alone. In some hornbill species, such as the brown hornbill, the offspring from an earlier year can help the father bring food for their mother in subsequent paternity. You could at times see up to three hornbills engaged in feeding mother and young. For in that cramped maternity ward, the bird would have laid a couple of eggs and hatched them. But what is important is that for this entire time, the female is fully dependent on her partner to feed her. If for some entirely male reason, the partner decides to fly away, the female would likely die. This is ordained if the male is caught by poachers for the pet trade, for example, or killed by tribal hunters for flesh or the beak itself. It is only if the female is not fully moulted that she has a chance of breaking open the seal and coming out. But in most cases, the heartbreak of a missing mate results in death. The male is a crucial, nay critical, in bringing into the world more hornbills.

The young which come out are then tended by both parents. Several times I have seen young hornbills go on small sorties with their father, feed with him on ripening figs on a sprawling ficus tree or take little flaps of flight between stout branches under his supervision. Umberto Eco wrote of fathers once in a way that hornbills seem to live: ‘I believe that what we become depends on what our fathers teach us at odd moments, when they aren’t trying to teach us. We are formed by little scraps of wisdom.’ The hornbill male is not conducting exaggerated fathering like the seahorse does. They seem to be more human in their ecological traits; in choosing mates, staying relatively fidel to them through life, sharing the choices of home and bringing up their young together, as a bonded pair. Even, some would argue, in the incarceration of the female in a chauvinistic hole of security based on loneliness, an eternal wait and the omniscient possibility of a snuffed-out existence.