The permanently aggrieved Hindu vs the secular denier 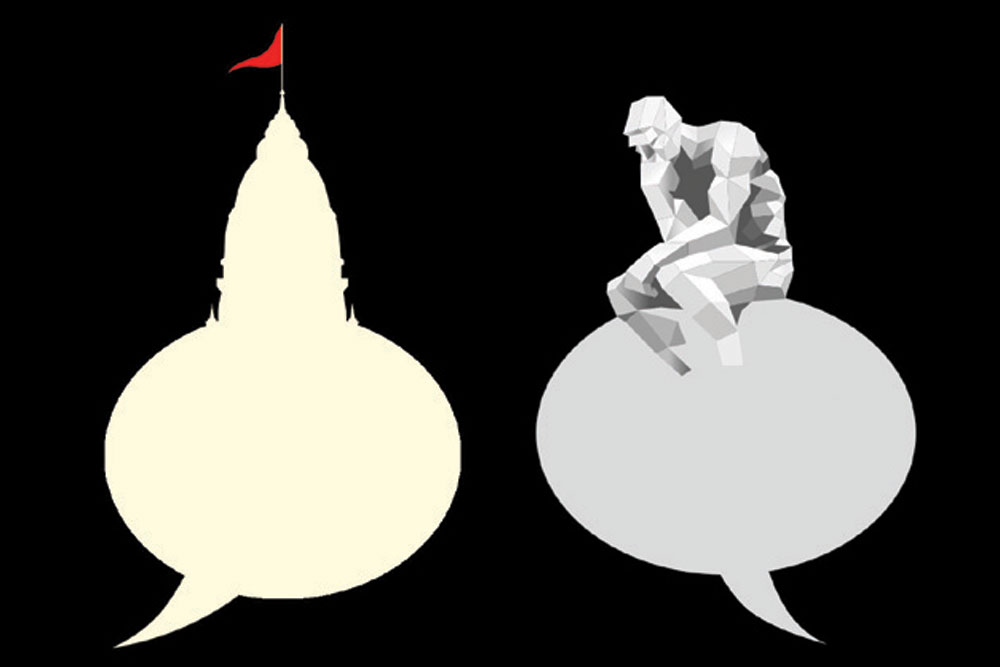 INDIA IS AMID a culture war, and it’s inevitable in a place where the familiar power hierarchy has collapsed, a new social order has not yet come to terms with its acquired power, identities have begun to aggravate religious anxieties, and some of us still continue to curse while denying the upheaval beneath our feet. It’s a clash of low aesthetics, its crassness amplified by social media and sound-bite journalism, and where the suddenly awakened guardians of national ethos assume the ownership of a people’s behavioural norms. They don’t believe in uncertainties, in the shifting shadows between the new moral markers. They seek domination in a world of granite presuppositions. We need to know what keeps them still aggrieved, still angry.

It begins with the post-2014 Hindu: politically rearmed and culturally reassured. He still likes to believe that he was reborn on the ruins of state-imposed secularism. The aggrieved Hindu, who was for long denied his rightful place in an India of enforced isms, finally found home. It was meant to be the end of resentment and the beginning of reconciliation, a new national way of life in which being a Hindu was not being in a permanent struggle for restoring the lost ideal. Empowerment, long overdue, was supposed to be matched by confidence that would end the urge to ask, “Who am I?” The Hindu who at last realised that religion was a natural component of political expression should have seen the futility of searching for enemies too. It was time for the winner to be at peace with himself.

That did not happen. The quiet confidence of the political establishment, best embodied by Prime Minister Modi, is not matched by its cultural counterpart, still steeped in resentment. The former has accepted that power is not preserved by permanent confrontation, even though, as a politician who is not squeamish about the uses of power, and relishes the pursuit of it, Modi won’t stop the argument for an India he is quite sure about. The cultural establishment, despite having gained a firmer terrain to stand on, still feels wounded, and its sense of hurt is given a voice, always loud, by those who have not stopped seeing the past as a lie, the present a struggle, and the future an anxiety. I can now see someone out there reminding me that, in the post-2014 India, the political is the cultural. It’s just one project. Maybe, but grievance is not the default state of the political mind in Modi’s India. The cultural has become a project in paranoid self-discoveries.

In this culture war, the politics of hurt the empowered Hindu still practises is set against the politics of denial preferred by those who are still trapped in the cliché of “the idea of India”. They won’t accept the change India is undergoing, in its cultural as well as political expressions; they won’t accept how one man’s conviction can start a national conversation on the religious essence of political identity. They are alarmed by the effect and least interested in the cause. The mistake they love to commit is their dismissal of the little traditions that the Hindu cannot let go. The shapeless harmony of Hinduism, in which it should be easier to find a fatalist than a fanatic, is sustained by inherited cultural attitudes. To repudiate them is to declare your allegiance to a modernity with an empty core.

Why should you be so worried about Hanuman, unless you really believe that you have been condemned to count your days in an India mythologised beyond redemption? Modernity is not something that is crushed under the feet of the monkey god.

The problem is the storyteller, the cultural warrior as an absolutist. He is also the wrong storyteller claiming ownership of a monochromatic country. For the Hindu storyteller floating in triumphalism, grievance is what reduces the distance between power and justice. It is what makes him the persecuted even in his hour of glory. It is as if grievance has become the civilisational motif of political Hinduism. For the cultural triumphalist, the cause of the grievance is the other’s inability—or unwillingness—to cope with change. His antagonist, too, is an ineffective storyteller. The India that emerges from his story is a place of shattered ideals, where the shared ethos of modernity has been replaced by the mythologisation of civil society. It is a clash between two unreal positions—the winner still wallowing in victimhood and the cry-my-cursed-country modernist who refuses to see the change the impulses of religion can bring to the nature of nationhood. Both the aggressor and the denier are bad storytellers.

And what lies lost between their versions of India is the story of national reinvention that needs to be told without exaggerations and accusations, with a sense of humility.