The Revenge of Religion

Constitutionalism and the cult of protest 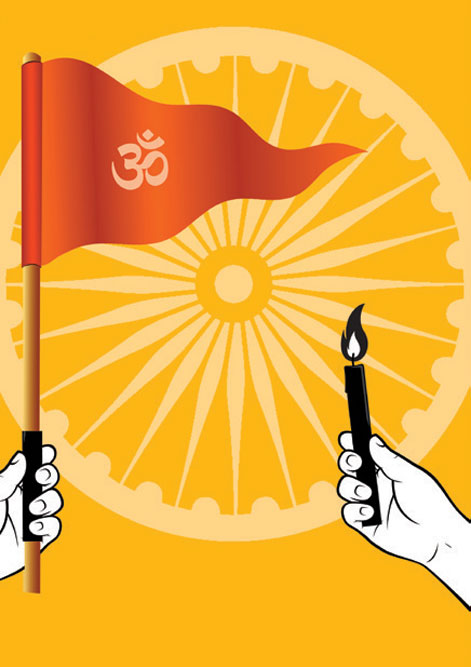 THE CONSTITUTION IS a codified national behavioural system. It’s imposed morality, loftier than what a people assume to be practical freedom. It’s the edict of lawful destiny. On the eve of the 70th anniversary of our Constitution—of the Republic—the conversation is all about the political temptations of a constitutional democracy like India. Everything is written, and, to use a pardonable pun, clausified. How far will a democratically elected government go to tweak the Holy Book for the sake of ideological gains? It’s the question we hear when the urban cult of protest beckons.

The street is the first romance of resistance. We may be condemned to live in a world where history is seldom written with a Capital H. So it’s the imperative of the dissidents to create their own Bastille and their own Vietnam. Today the barricades built in the delirium of the street fighter is more formidable than the ones that actually exist. Shaheen Bagh in Delhi may not be Wenceslas Square ’89, and its exaggeration as a site where the calcified conscience of the Indian state is on trial may be an instance of the fickle television intellect. Still, Shaheen Bagh tells a story we cannot afford to miss.

Beyond groupthink and the call of the hashtag revolution, it tells the story of citizens’ alienation that the Constitution, in its fundamental ethos, wanted to dispel. The fear of the new citizenship law may be the result of an accumulated sense of being marked, but it is also a protest against power without empathy. And this fear is founded more on perception than on reality. When a state fares badly in the perception war, it’s the failure of conversation. It’s the sign of shrinking intimacy between citizen and the state. Shaheen Bagh, in spite of its metaphorical status as a pilgrimage site for all those who are alarmed by this Government’s permanent culture war, is also about the conflicting politics of compassion.

Through the Citizenship Amendment Act, the Government is playing out its own version of the politics of compassion. As its antagonists stress on the present to highlight the state’s power of cultural classification, the Government wants to correct a piece of history without compassion. A home for the persecuted minorities—read Hindus—from the Islamic neighbourhood is indeed a return journey to Partition, with compassion and a sense of historical responsibility. The past, when nations remember, is a place with no mercy—or a place with much glory. This Government finds both places worth revisiting, and it thinks it’s morally bound to do so.

The Citizenship Amendment Act is rooted in this morality, and it’s being challenged by those who see it as an instance of cultural immorality. The first is justified as constitutional compassion, but the opposition sees it as segregation through constitutional manipulation. At the core of this clash is the reading—or rereading—of the Constitution. As Madhav Khosla writes in his brilliantly argued book, India’s Founding Moment: The Constitution of a Most Surprising Democracy, which is also the source of our commemorative cover story this week, “India’s founders held a certain conception of a democratic citizen. Like the imperialists that they fought, the makers of modern India too sought an enlightened politics. They did not attack the idea of modernity or the attributes of constitutional democracy. Indeed, Indian nationalists fought for these alien ideals with hope and fury.”

Are we paying the wages of modernity?

To be modern, in the founding morality of our Constitution, was to remain uncontaminated by religion. For Nehru, the presiding deity of India’s modernity, religion was what stood between progress and Indianness. The New Man of the secular state should not give in to phantom gods, or their books. The enlightened individual is the one sculpted to perfection by the Constitution, not the one with an organic link to tradition and cultural memories. The New Man has already come apart. The New Man has been undone by the instinctive power of cultural identities. And the idea that religion clashes with modernity, in spite of the regression of Islamism, is a fallacy.

Religion can build modernity. That is still the story of Western civilisation, which is interchangeable with Christendom. That was once the story of Islam, too. Why is it that politics with a Hindu adjective is seen as anti-modern? Is it a view conditioned by the misplaced notion of modernity that powered the framing of the Indian Constitution? A Government that thinks the size of its mandate is a great opportunity as well thinks so. In 2014, the winner was India’s next moderniser. Five years on, modernisation is increasingly a cultural project rather than an economic project.

As the Republic turns 70, what’s at play is the revenge of religion the founding fathers had failed to foresee. The enlightened citizen is still trapped inside the Constitution; the instinctive citizen is out there in the arena.