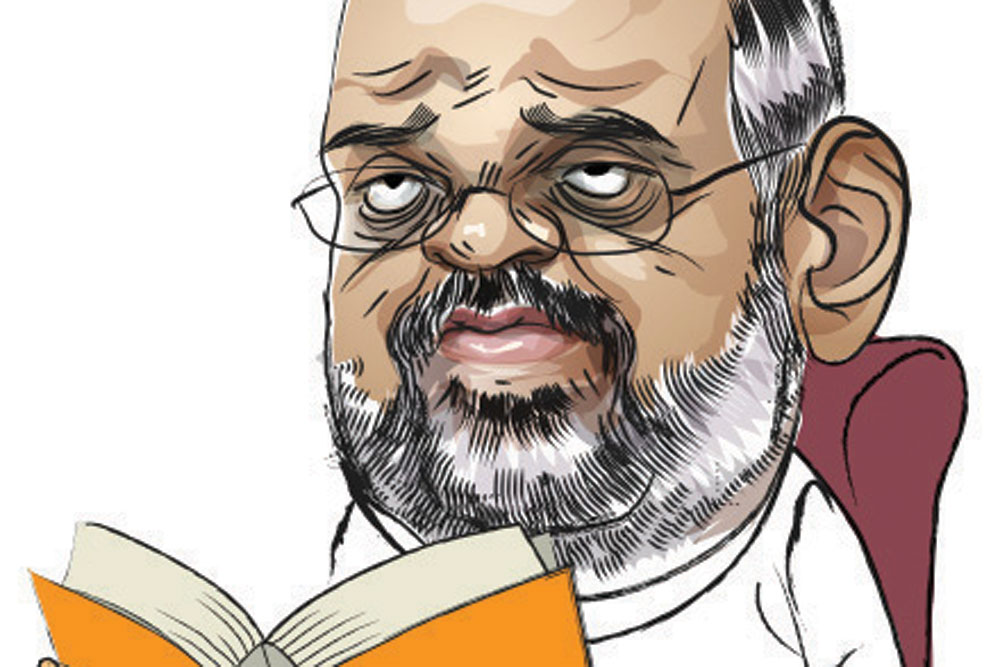 
Very few people know that Union Home Minister Amit Shah has a hobby studying Vedic mathematics and astrology. He is also a spiritual person who goes to temples often. In 2014, after he was elected as the Bharatiya Janata Party (BJP) president, he revived the political programmes of touring state capitals and villages. During such visits, he made it a point to visit local temples and perform pujas. His family members, too, are of the same bent. Recently, his wife and daughter-in-law went to Kalighat in Kolkata and performed a special puja. The media tried to know its purpose and whether there was any political objective. Kalighat is where West Bengal Chief Minister Mamata Banerjee also stays. But Shah’s family didn’t speak to the media. For them, it was a personal visit and had nothing to do with Bengal politics.

In West Bengal’s Assembly election, BJP’s main target was Mamata Banerjee’s nephew Abhishek Banerjee. Many in the Trinamool Congress (TMC) feel that attacking Abhishek made him an important leader in the party. After Mamata Banerjee, he became their star campaigner. Recently, he gave his first television interview to a Bengali channel. In it, he said that when the prime minister, home minister, the BJP party president and all its senior leaders attacked him so much, he was sure that he had some potential and was grateful they gave him so much importance.

Mithun Chakraborty was a star campaigner for BJP in the West Bengal election. But he also faced flak for that reason from the Election Commission (EC) because of the crowds he drew at a time of Covid restrictions. Recently, he went by helicopter to address a rally and there were 3,000 people waiting to see him while the EC had put a limit of 500 for such events. Apprehensive about flouting norms, he immediately decided to go back after waving at the crowd.

Mamata Banerjee, after a fall during a rally, did almost her entire campaign in a wheelchair. But what has bothered her most about becoming temporarily so confined is that she has had to give up her treadmill sessions. In normal campaigning times, she walks 20 to 25 km. This time, she could not do it. She has requested doctors to look at opening the plaster case of her leg, but they feel it still needs a few more days to heal.

While Arvind Kejriwal is busy battling the crisis in Delhi, Odisha Chief Minister Naveen Patnaik has announced that in his state there is no lack of oxygen. It has surplus oxygen and is giving it to other states like Andhra Pradesh, Telangana and Chhattisgarh. Now, he has sent tankers to Delhi also and is ready to provide oxygen to neighbour West Bengal. Patnaik keeps a good relationship with Modi and is always in touch with him and Amit Shah. Dharmendra Pradhan is also a key person in coordinating between the Centre and the state.

Rajasthan Chief Minister Ashok Gehlot is a seasoned politician who has avoided needless confrontation with the Modi Government. He diligently attends all the prime minister’s meetings and is trying his best for an amiable Centre-state relationship and cooperative federalism. But Congress top leaders, including Sonia Gandhi and Rahul Gandhi, held a video conference with Gehlot and other state leaders and suggested that they speak up more against the Central Government. Gehlot and Deputy Chief Minister Sachin Pilot evolved a consensus that they would highlight the Centre’s bias against non-BJP states. Congress is in power in three states and Sonia wants a joint strategy against BJP for all of them.

In Assam, Home Minister Amit Shah’s man Friday is Himanta Biswa Sarma and if the BJP gets a fractured mandate, it is said he will organise the numbers. He can split Congress and other parties leading to BJP forming the government. But then, he will also want to be Chief Minister, which the party won’t mind. However, if BJP gets a majority, then the equation changes and Sarbananda Sonowal may once again get the post.

There was a major controversy after Delhi Chief Minister Arvind Kejriwal live telecast the chief ministers’ conference with Prime Minister Narendra Modi. Modi rebuked him by saying this was against protocol. Amit Shah was more vocal against Kejriwal. He said the Centre was ready to support the Delhi government during its Covid crisis but they did not take it, and are now complaining. The relationship between the Centre and the Delhi government has worsened since. The Prime Minister’s Office says that the Centre was ready to give tankers but the Delhi government said they already had tankers, and now
they are putting out advertisements asking for them.

Enemy of My Enemy

In Kerala, the main battle is between the Communist Party of India-Marxist (CPM) and Congress although BJP, it is being said, is not in favour of ousting the communists. They see Congress as their main national enemy. If Congress came to power in Kerala, it could contribute to its revival. BJP, meanwhile, has no chance of winning in Kerala. Also, it is known that Chief Minister Pinarayi Vijayan maintains a working relationship with the Centre. Thus, there is no reason to be aggressive against CPM at this stage.