Politics in Past Tense 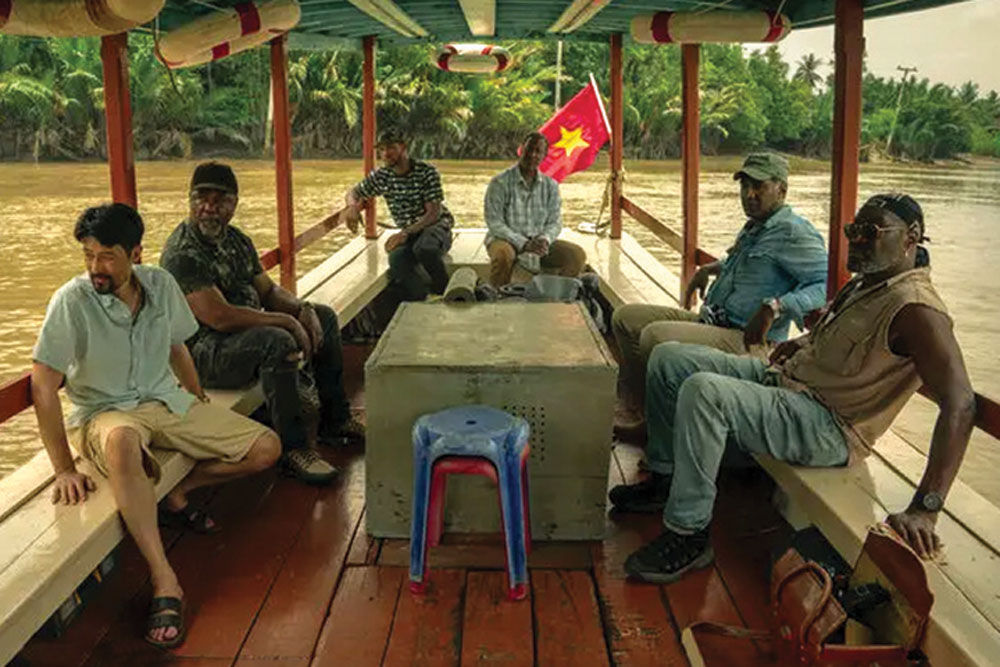 A scene from Da 5 Bloods


EVERYTHING NEEDS TO fit in. Everything. Maybe that’s one reason, one mighty reason of the zeitgeist, that we liberally borrow from the sacred texts of the present to reinterpret the profanities of the past—and to correct them. Its manifestations keep coming, mostly from people who are desperately looking for suitable adjectives to make sense of their current predicament. They see themselves as necessary arsonists in a world of bad memories and incongruous iconography. Social justice has to be followed by historical justice.

In America’s justified rage against racism, it was as if, for black lives to matter, some Confederate statues with a backstory of slavery had to go. As the rage spread across the Atlantic, among the savage statues were the ones with imperial ancestries. Queen Victoria, Robert Clive and Churchill were the usual suspects of course; the “anti-African” Gandhi was a surprise.

The Empire is on trial, and this time on the street. The story we want to hear is the story of plunder and racial hegemony, and it’s the narrative that appeals to colonies that still bear the scars. We continue to get such stories, some of them so masterly told, some of them noted for their rhetoric rather than history, and they all add to the rich repository of post-colonial storytelling.

I’m here on the side of the historian Niall Ferguson, whose imperial explorations deviate from the moral anger of the familiar the-past-is-a-country-without-justice position. The noble obligations of the British Empire outweigh the indisputable injustices it has inflicted on the natives, and it’s an argument he makes with much elegance in Empire, a study in what he calls Anglobalisation. “The question is not whether British imperialism was without a blemish. It was not. The question is whether there could have been a less bloody path to modernity,” and it’s an argument only the ideologically motivated can reject.

The Imperium is back in the slogan. What the street fighters see in it is not the first imprint of modernity but the first motivation for enslavement and the dehumanisation of power. So it’s so natural for them to feel vindicated whenever a filmmaker or a writer, blessed with prescience, opens a window to the old swamps of imperial horror.

The black filmmaker Spike Lee opens such a window with his new work, Da 5 Bloods, streaming on Netflix. It’s not an art house meditation on war and remorse; it’s a coloured western that pays periodical tributes to genre classics such as The Treasure of Sierra Madre and Apocalypse Now. The five bloods are black Vietnam vets, and one of them, the leader, Stormin’ Norman, had died young in battle. The four return to Vietnam to retrieve the remains of their brave leader—and buried gold.

The adventure may not measure up to the best in its class, but it’s a film loaded with messages and memories, camouflaged guilt and unrealised redemption. And towering above the rest is Paul, a tortured soul in a MAGA cap, a Trump supporter whose enthusiasm for the wall and opposition to immigrants make him an unlikely pillar on which rests the moral as well as the emotional weight of the film.

Paul, played by Delroy Lindo, attains a primitive grandeur and elemental strength in the tropical backdrop, fighting simultaneously on two fronts: his inner demons and the natives. He is an epic devastated by the combined fury of history and memory. He strays from the group only to get closer to his hero: Norman, played by Chadwick Boseman of Black Panther, the living brothers’ “Malcolm and Martin.”

Were the black soldiers, proportionately higher in numbers than the whites, imperial America’s cannon fodder in Vietnam? Da 5 Bloods implies so, and the treasure hunt, in the moral setting of the film, is a quest for justice in retrospect. Reparation, if not repentance, is long overdue.

The window Lee opens with such formulaic flourish in Da 5 Bloods gives America a vantage point to view the burning streets from a culturally correct angle. Its political immediacy compensates for its modest entertainment quotient. It takes America back to the remains of a past where the nobility of brotherhood was set against the cruel intentions of the Imperium. It gives the street a historical lesson.

What do such lessons achieve in the end? They indeed trap a film, commercial or otherwise, in the received moralism of the present. Such enforced lessons introduce a new pedagogy to our relationship with the past, which is not necessarily a permanent dispute. It can be an argument that ends in a resolution. Even Lee’s brothers, in the end, reach a resolution, a closure. The street today is not merely the site where the past is brought back to a show trial. It’s where the argument with a bad yesterday allows no reconciliation, only the eternity of grievance.