Good news: Karat, an ideological classicist, unlike his fellow comrades, does not live under a fascist regime. Will he go a step further risking his own ideological position? 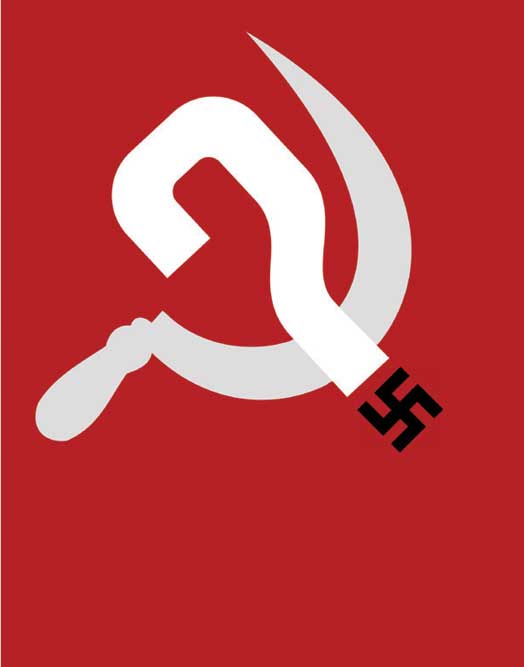 YOU HAVE HEARD this before, this angst-heavy indictment: fascists are at India Gate, all set to savage our secular soul. You have heard this whenever India was under attack, not by jihadists or other such angry men born out of historical injustices or social wretchedness (God bless them), but by the trident- wielding soldiers of Hindutva, the most militant religious fascist formation, we have been told. And, persistently, we have been shamed by the moral minority for our silence, and therefore our tacit collaboration—our conscience irredeemably frozen— with the stormtroopers in saffron. From the italicised pamphlets of wretched-India retailers and the dry, custom-made, Stalinist verbiage of apparatchiks, it has been an unsolicited flow of wisdom, reminding us of our culpability in legitimising the fascists of Weimar India—and look what we have gained: desi variations of the Holocaust. Have we been in the wrong country?

We should have known: language has always been deployed by the conscience-keeping industry to reduce history to a set of convenient glossaries. We haven’t even noticed their laziness: victims of a communal clash require a metaphor as heart wrenching as Auschwitz; your average right-winger in power, not even necessarily an unrepentant hate-monger, deserves an adjective as repulsive as ‘fascist’; and there is a genocide every other month in just another cursed spot. With such casualness, they, scavengers in search of historical catch phrases, banalise the sacredness of memory, for certain words carry within them a piece of history that is unique in its dehumanising horror. Language is liberating, but when it is called into the service of two penny moralisers, it is restricted sensibility, and a prison of perceptions. It is a lie that pretends to miniaturise truth, and it is a hurtful simplification of the past. It is an insult to the dead. You have no idea what it was like; what you have is an armoury of borrowed phrases.

And then I read Prakash Karat: ‘In India today, neither has fascism been established, nor are the conditions present—in political, economic and class terms—for a fascist regime to be established… No section of the ruling class is currently working for the overthrow of the bourgeois parliamentary system… In India today, Hindutva ideology and chauvinist nationalism are used to polarise the people on communal lines…While these (communal) activities pose a grave and present danger to democracy and secularism, they do not, by themselves, constitute the establishment of a fascist order.’ This is amazing stuff, as it comes from the purest of the current crop of apparatchiks who represent a political tradition that survives on redundant slogans and a regulatory diet of isms such as anti-fascism and anti-imperialism and anti-communalism. In his op-ed article in The Indian Express, Karat parades all his favourite bogeymen to tell us how impoverished— politically as well as economically—India has become after the arrival of Narendra Modi in Delhi. It is hell, of course, as this is an India where authoritarian temptations of the right-wing have peaked, where minorities are terrorised, and where the ruling regime prostates before the American imperium. Bad. It could have been worse. But Karat, an ideological classicist, unlike many of his comrades, does not live under a fascist regime.

Sitaram Yechury may not agree, for it is pretty difficult to make a political deal with fascism. Certain pamphleteers may consider it Karat’s ideological subversion, for a convincing portrayal of the wretched India is impossible without wild strokes of fascism. And Karat’s successors at JNU will be devastated by this cop out, for the revolution cannot be sustained without the looming fascist state to rage against. The leftist struggle against power in India is an attack of slogans, and invariably, they are slogans collected from someone else’s history. Indian communists, and their intellectual fellow travellers in academia, have been left with nothing but semantics to remain alive in the post-ideology world. That is why Karat’s rejection of the f-word, in a subtler way, is a rejection of the standard-issue leftist argument against Modi’s India.

What is next, comrade? Will you go for further anatomisation of isms in the Indian context, risking your own ideological position? Definitions may vary, but, in practice, has there been much difference between fascism and communism? Leave aside finer points on private ownership and individual rights and the role of the almighty state for a while, and come to the fundamental question of life’s dignity. Both do not give a damn: the difference between the concentration camp and the gulag is just a matter of method. In India, Karat’s party may have internalised the worst instincts of the Soviet empire without ever having the burden of safekeeping an empire. Power is now a shrinking reality in its erstwhile citadels, and the day before in Delhi, it was nothing more than ideological harlotry made respectable by liberal use of the aforesaid isms. Being a careful reader of textbooks and national traits, Karat could not have missed the fact of non-fascist India turning increasingly hostile to his own ism as well. Maybe he is too much of a gentleman comrade to be impolite even to a merciless history.