The Crown Prince of Bone-Saw Kingdom 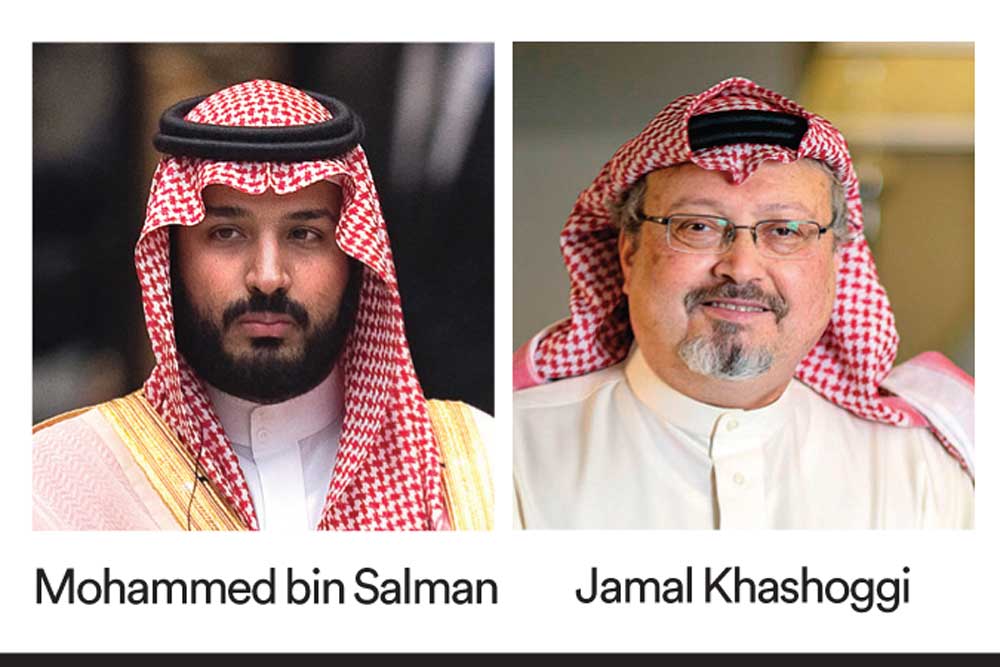 IMAGOLOGY IS A neologism best explained by Milan Kundera in his novel Immortality. ‘Imagologues create systems of ideals and anti-ideals, systems of short duration which are quickly replaced by other systems but which influence our behaviour, our political opinions and aesthetic tastes, the colour of carpets and the selection of books just as in the past we have been ruled by the systems of ideologues,’ he writes while talking about the ‘planetary transformation of ideology into imagology’. Last Sunday in Islamabad, all it took was a picture to tell a bad story ever so badly. In a photograph clicked for the front pages, we saw them in the front seats of a Mercedes, Prime Minister Imran Khan of Pakistan as the chauffeur and Crown Prince Mohammed bin Salman of Saudi Arabia as guest. It was a gesture that defied protocol and brought out the cool contemporaneity of Imran, whose election six months ago marked a ‘change’ in a country otherwise dismissed by some as a historical error, and where scriptural cold-bloodedness still has quasi-official protection. And the prince, affectionately abbreviated as MBS, heir apparent to the throne of the House of Saud, too, launched himself onto the world stage as an agent of change, and panegyrists even went to the extent of calling him a Gorbachev in a keffiyeh, ushering in reforms in the rich and repressive kingdom of Saudi Arabia. So, in Islamabad, it was a perfect piece of ‘imagology’.

Imagology is a manufactured metaphor for a lie as ambitious as ideology. Take the chauffeur. Pakistan needed a redeemer, and Imran, an apolitical politician who initially projected himself as the conscience keeper of a country savaged by generals and complicit democrats, had the necessary image. He was the outsider, untainted by the transgressions of power, and his base was young and restless. He could have been the protagonist of a Pakistani Spring. In power, he didn’t do much to repudiate the lingering suspicion that he, in spite of the imagologues at his service, struck a fine balance between the military and the mullah, the twin pillars of the state within the state. Power neutralises the romance of the outsider, and Imran’s current bluster and braggadocio reveal the true work beneath the imagology of the outsider: another stereotypical Pakistani leader who too realises the existential uses of an enemy.

Now take the prince, who was given a welcome worthy of his wealth and ‘strategic’ power in Delhi, his next stopover. The imagologues had photoshopped him to perfection when he began his ‘reforms’ by letting women drive and by opening movie theatres in Saudi Arabia. And his ‘ethical purge’ had its dramatic moment when scores of princes and princelings with a combined net worth of billions were locked up in Riyadh’s Ritz-Carlton—a Gulag for the rich. Things turned problematic when a group of Saudi hit-men armed with a bone-saw descended on the Saudi Consulate in Istanbul to receive Jamal Khashoggi, a columnist for the Washington Post and a severe critic of the regime. Investigations by the CIA and Turkey had established that the dismembering and killing of Khashoggi, a Saudi exile living in Washington, was ordered by the highest echelon of the kingdom. The American president rejected the findings of his own agency and maintained that Saudi Arabia contributes so much to the US economy by buying weapons worth billions of dollars that he cannot afford to blacklist the prince. Trump’s transactionalism won the day.

And the prince, meanwhile, needed a lot more from his imagologues.

The prince’s Asian blitz—next stop, China—is post-Khashoggi imagology at work. Delhi too treated him with the kind of special indulgence a prince of such ‘strategic’ importance is worthy of. Strategic, that is the word that comes to aid whenever a transactional government defends a repressive kingdom whose extra-territorial brutalism still goes on unabated beyond the headlines in Yemen. MBS needs more than all the perfumes of Arabia to humanise his image after the bone-saw vengefulness. He needs more fawning Asian hosts in thrall to his benevolence to create an illusion of modernity.

Morality is seen as naiveté—or idealism without responsibility—in the age of transactionalism. So by talking about the bone-saw kingdom, you run the risk of being accused of falling for a Western libertarian narrative. Which, in a sense, leads to another reality: Third Worldism has only lost its geography, not its morality or mindset. So we still need to indulge bone-saw princes. Let’s nevertheless end this column with a quote from Khashoggi: “When I speak of the fear, intimidation, arrests and public shaming of intellectuals and religious leaders who dare to speak their minds, and then I tell you that I’m from Saudi Arabia, are you surprised?”

Some of us are, still.