The ideological dyslexia of the thinking individual 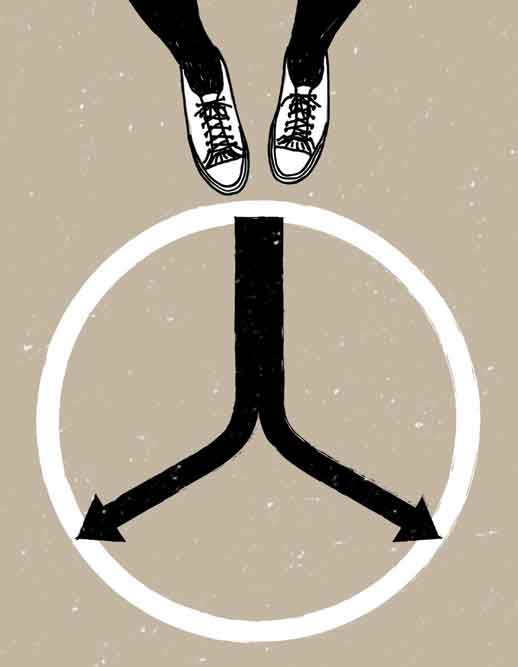 
WHEN IT COMES to the ideological landscape, I often feel navigationally dysfunctional. Am I heading Left, drifting Right, or turning round in circles in the Centre?

I am for freedom of speech, including the freedom to hurt feelings: is that right or left? It’s hard to say these days.

I am pro markets (right), but socially permissive (left). I am a feminist (left), but I don’t believe in quotas (right). I over-schedule my children with classes in elite pastimes, including piano and golf (right). I care enormously about basic healthcare and primary education (left), as well as creating an environment within which entrepreneurs can flourish (right). I believe stray dogs are a menace (right). I am passionate about diversity (left), but I believe in uniform civil codes (right).

I identify as liberal, but not as woke. I dislike virtue signalling as much as paternalism. I am proud of being Indian, but against nationalism. I have refused to give up my Indian passport for the last two decades despite the possibility of exchanging it for a European one. Yet, I don’t feel compelled to stand up for the national anthem at a movie theatre.

To be honest, most of the time I’m just astonished, and a little weary, of the labelling, the group think and the anger that everyone seems to feel against everyone else who has different views. The concept of agreeing to disagree, except on the rules of how to disagree civilly, has been sidelined into a quaint anachronism by Twitter and its trolls.

In any case, terms like Left and Right have always been situational, changing form and significance in different contexts: the French Revolution, the Russian revolution, the rise of socialism and nationalism in Europe, the birth of student movements in the US, the global environmental movement, and the identity politics of contemporary times in India and beyond.

The terms also mutate with the age and circumstances of the person deploying them: college student, salaryman, single, en famille, and so on. As the hoary saying goes: “If someone isn’t a socialist at 20, they have no heart. If they’re not conservative by the time they are 40, they’ve no brain.”

As problematic as the Left-Right labels may be, the history of how directional categories came to stand for ideological ones is fascinating. The terms began as literal descriptions of the physical placement of politicians in the French National Assembly during La Révolution.

By the summer of 1789 the French Revolution had gained steam and an angry mob had just stormed the Bastille. The National Assembly gathered in Paris with the goal of writing a new constitution. But the delegates were deeply divided over the issue of how much authority King Louis XVI should have. Should the monarch have the right to an absolute veto?


The two main factions in the French national assembly staked out distinct geographies. The anti-royalist revolutionaries seated themselves to the presiding officer’s left, while the more conservative, aristocratic supporters of a monarchical veto gathered to the right

As the debate raged, the two main factions staked out distinct geographies in the Assembly hall. The anti-royalist revolutionaries seated themselves to the presiding officer’s left, while the more conservative, aristocratic supporters of a monarchical veto gathered to the right.

“I tried to sit in different parts of the hall and not to adopt any marked spot, so as to remain more the master of my opinion,” one rightwing baron reportedly wrote, “but I was compelled absolutely to abandon the left or else be condemned always to vote alone and thus be subjected to jeers from the galleries.”

The ideological divisions deepened during the 1790s, when French newspapers began making references to the progressive “left” and traditionalist “right” of the French Assembly. By the mid-19th century, “left” and “right” had entered the French vernacular as shorthand for opposing political ideologies.

France’s “left” and “right” labels filtered out to the rest of the world during the 1800s, but they weren’t common in English-speaking countries until the early 20th century. By then, ideological dyslexia was already a common condition.

Communist governments are classic examples of the revolutionary Left, yet they instituted some of the most autocratic, anti-liberal regimes the world has seen, quashing freedom of speech and the right to dissent that are today associated with the Left.

Labels are empty. Any country with “Democratic” as part of its nomenclature is suspect of being anything but. Think the Democratic People’s Republic of Korea or the Democratic Republic of Congo. And Hitler’s Nazi party’s full name was Nationalsozialistische Deutsche Arbeiterpartei, or the National Socialist German Workers’ Party. Clearly, Left and Right are complex and often confounding terms. To add some masala to the already bubbling stew, there is also research in psychology to show that Left and Right might have psychological meaning embedded deep in human consciousness, long predating the French Revolution.

Dualistic thinking is a hallmark of varied metaphysics across the globe. The Chinese concept of yin-yang being a case in point. In a lot of Western thought, the Right has been associated with “good”, “male”, “truth”, “light”, while the Left with “bad”, “female”, “deceit”, “darkness”. In the Bible, the elect sit on the right hand of God.

Even in India, where ancient philosophical schools like Advaita reject dualistic metaphysics, the Left-Right divide has nonetheless seeped into everyday practice. For example, people traditionally use their left hand for “dirty” ablutions, and their “clean”, right hand for eating or making offerings to the Gods.

Dualistic thinking is a hallmark of varied metaphysics. In a lot of western thought, the right is associated with ‘good’, ‘male’, ‘truth’, ‘light’, while the left with ‘bad’, ‘female’, ‘deceit’, ‘darkness’. In the Bible, the elect sit on the right hand of god

Languages reflect this duality too. In many Romance languages, for example, the left is related to odd or negative aspects of life. For example, sinistra, the Latin word for left, is the root for our word “sinister”. Gauche, the French word for left, also means unsophisticated or awkward. In English, we give people “left-handed compliments”, and fight for our “rights”. When someone is your “righthand man”, he’s a good bloke.

In today’s world the “negative” qualities/entities located on the Left column of many ancient dualisms—female, heretic, slave—have through historical processes come to be associated with the ideological Left.

So where does this whizz through the history of ideological terms leave us? I’m at the age (mature), and of the circumstances (global), where I’ve come to believe that wisdom is when you figure out how to make sense of the world around you not through the prism of overdetermined ideological labels but through an internal multifocal lens with shades of rationality, empathy, pragmatism and idealism.

Instead of Left, Right and Centre, how about categorising our worldviews into “Sense, Sensibility and Sanity?” Or,“Maybe, Could Be, Should Be?” I suppose, “Love, Peace and Tolerance” would be asking for too much?