UP and Beyond: The National Inflection Point

Modi’s popularity continues to consolidate itself, not in spite of, but because of his gambles 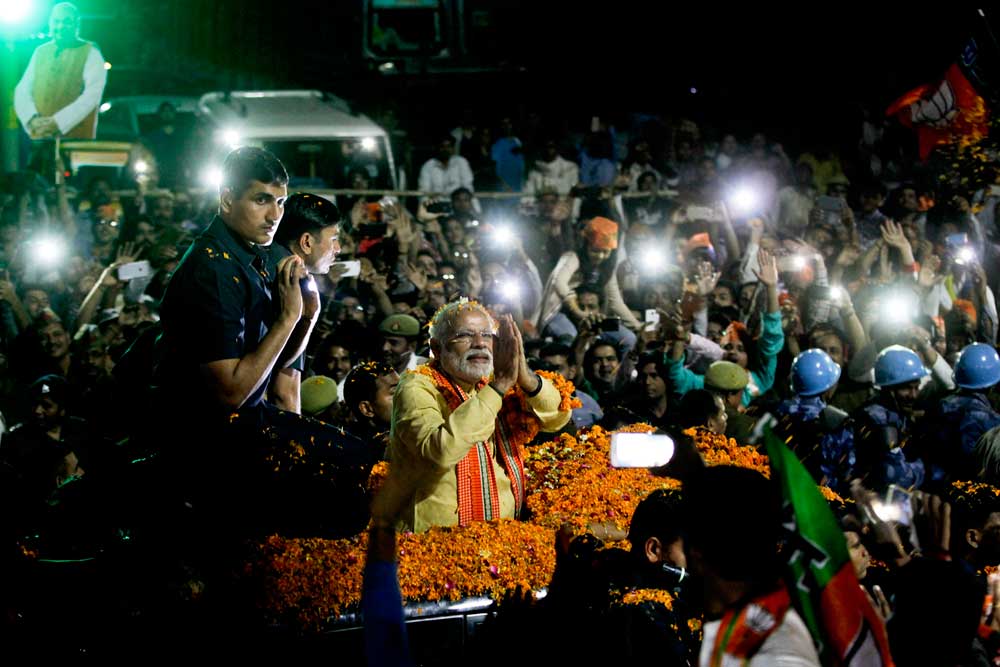 The people of UP are fatigued with development sloganeering that means nothing on the ground. For three years they have been fed on false hopes of this kind. The crowds that thronged Modi’s election rallies in 2014 and in 2017, man-for-man, rag-for-rag, are the same. Nothing has changed.

In 2014, it was the promise of a new developmental paradise, ushered in by a windfall gain of Rs 15 lakhs per citizen out of the mountainous Rs 90 lakh crores of black money that Modi would bring home from overseas tax havens. He asked for, and we granted, a hundred days to perform this feat. As for development, he would do a China here and it would then be a small step for India to be an economic superpower.

Now development has shifted to the backburner. That backburner is Akhilesh Yadav. He kept parroting development; not realizing that the people’s honeymoon with development was over. He was offering them the remnants of a sumptuous banquet served the day before.

The card that BJP played this time around was communal consolidation. Explicit attempts to polarize communities were avoided. But a clear and impassable divide was created between electorates, especially from two communities.

A devil of a strategy this. It stands on the insight that there is something far more powerful than mosque or temple to manipulate voters. It involved the re-invention of the old formula, “us vs. them”. It was not winnability, as claimed, that kept the BJP candidates list scrupulously homogenized. Under the Modi wave, if Azam Khan’s buffalos were fielded under the lotus symbol they would have romped home.

Mayawati issued tickets to a hundred Muslim candidates. SP-Congress combine too was generous. So a confrontation between secular tokenism and full scale communal consolidation was ripe and ready for enactment.

It is unlikely that either Mayawati or Akhilesh or Rahul understood the primeval, atavistic significance of BJP strategy. Its roots go a long way back to Athenian democracy. Women, slaves and workers were excluded from the political space. Only free men –free from having to mind the needs of one’s household or work to earn a living- were eligible. The right to participate in the public affairs of Athens was limited strictly to a socially, economically and culturally homogenized set of people who were full-fledged native citizens and superior to the hoi polloi.

Visibility in the political area was a mark, in itself, of distinction. To be excluded was to be stamped with inferiority and disenfranchisement. This pattern was readily sellable to UP voters. Its main advantage lay in the fact that the picture –the eloquent absence of Muslims from the BJP UP list- could be trusted to do the talking. It did.

Nothing else explains the consolidation of votes cutting across caste lines. It is naïve to interpret this as presaging the decline of the caste factor in Indian politics. What it signals is the emergence, though not for the first time, of a factor far more electorally potent than caste. Caste fragments. Communalism, played discreetly, can unite all castes and classes. If caste is an electoral dyke-fall, communal consolidation is a tsunami.

Fifteen years ago, Gujarat was the laboratory. This time around, it is UP. UP today is the nation’s tomorrow. We should expect UP repeated in crucial states. General Elections 2019 will truly be the inflection point in our political history.

So, what are the opposition parties to do?

Quite simply, they have to reinvent themselves; and that, majorly, in two respects. First, they should define both for themselves and for the rest of country the idea behind their existence. What is the idea that moves them? Idea alone is powerful. Let me illustrate.

In my several conversations with Mrs. Sonia Gandhi, I was told repeatedly that the shaping concerns of her mission in politics were: the strengthening of the secular fabric of India and to ameliorate the suffering of the poor. When she refused to become PM in 2004, despite deafening clamours to the contrary, she was staying true to her goals. What she needed most was not State power but moral authority. All through UPA-1, it was sky high. It struck a chill through the BJP and drove its stalwarts to despair. The people revered her spirit and stood by her.

UPA-2 came to power on the strength of her image. Through Mrs. Gandhi, the Congress stood for something with which the people of India could identify. UPA-2 squandered that invaluable legacy. Rahul’s lacuna is not that he is not an earthshaking orator. Sonia too wasn’t. His problem is that he does not know what he stands for. If he does, only he knows what it is. If he thinks that the Gandhi name is an adequate substitute for an overwhelming idea, he is mistaken.

Akhilesh talks about development. But, I am afraid, he has no proactive, holistic idea of development. He is, in that respect, a pale replica of Modi. When both are equally confused as to what development should involve, then the day will be won by the one who shouts the loudest and manipulates crowds like a ventriloquist.

This arrangement thrives by default. It is high time opposition parties understood their roles in an enlarged paradigm. Before they approach citizens for votes, they must educate them. This was the strength, once upon a time, of the left movement, especially in Kerala. Mere rhetoric will not work, as a result, in Kerala even now.

The common  denominator to all of Modi’s election speeches was the fiery rhetoric of attack. He sought and obtained votes highlighting the failures and depravity of other parties. Shouldn’t voters, for their own good ask, ”Ok, they left us in the lurch. It’s too bad. So, we turned to you. But what have you given to us in the last three years?” The moment such a question is raised, bubbles will begin to bust.

That brings us to another crucial issue. How are voters to make an informed choice if they do not hear both sides of the argument? As of now, electioneering is an exercise in unilateralism. Truth is misrepresented as one-sided. Then it becomes a matter merely of the gift of the gab. Akhilesh volunteered to debate Modi. Modi looked the other way. A thousand rhetorical balloons will burst at the prick of a single fact. Face to face, it is facts that matter. In exercises of unilateralism, involving captive audiences, myths and mischiefs have a field day.

The news from UP is that ‘development’ is a spent force. Modi has shifted from its shifting sands. His developmental track-record in the last nearly three years is pedestrian. Employment generation is abysmal. The quality of life for the citizens, from the middle class down, is regrettable.

Resorting to the communal consolidation of votes in UP is an explicit admission that demonetization has not worked. None of its goals trumpeted to the county at large has been achieved. Nobody tells us how much black money has been unearthed. Nobody tells why all the currencies are back in circulation, with the only change that Rs. 1000 note has given way to a measly-looking Rs. 2000 note. And we are required to believe that this will end corruption in this country! It is as good as saying that I will heal you of your craving for jaggery by replacing the present one litre bottle with a two litre bottle of the same stuff.

Modi’s popularity continues to consolidate itself, not in spite of, but because of his gambles. It will be difficult to spot a single issue or problem that he has addressed with beneficial outcomes to the people. It is like Arun Shourie saying, “Sonia and Manmohan are Modi’s campaign managers.” Modi still has his campaign managers. The mantle has fallen on the younger generation. This too follows, like all else, the dynastic principle.