The Futility of Imposing Expiry Dates on Vehicles

Why am I being stopped: aam admi encounters an arbitrary rule 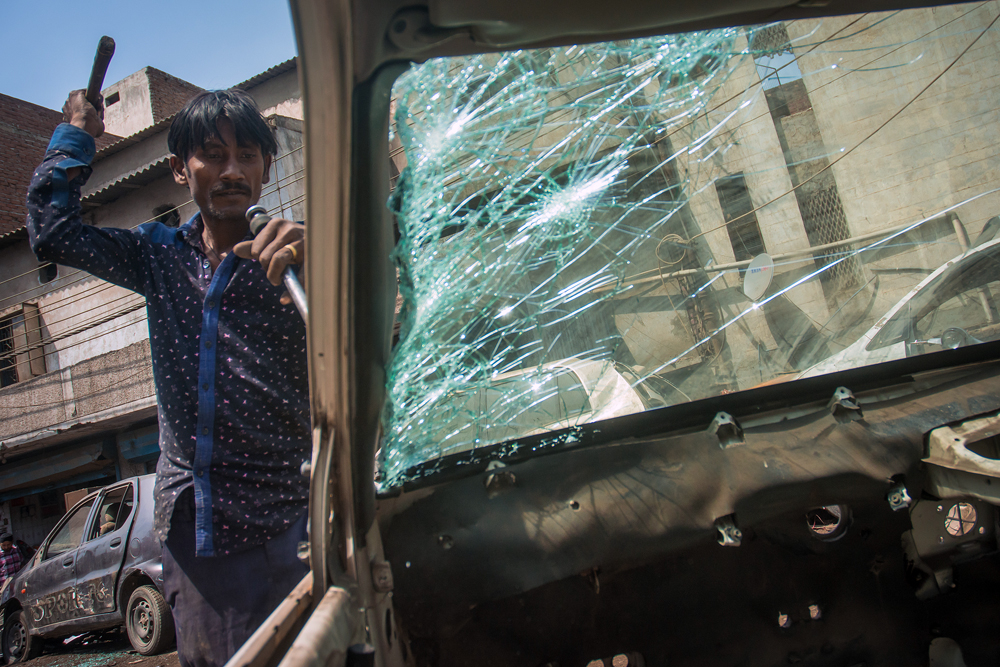 When the traffic police suddenly stopped my car, I was pleasantly surprised.

Did I jump a red light?
Did I forget to wear the seat belt?
Did I cross the speed limit?
None of the above. And I have all the papers in place as well.

As I got down and showed the documents, I was told that the vehicle is no longer valid to ply on the roads of Delhi, as it is more than 15 years old already. It is time for it to be impounded, confiscated and taken away to the junkyard for dismantling. The new law of the land considers it to be legally dead.

I got into an argument.
I said that the registration is valid till 2032; they said it doesn’t matter.
I said that the vehicle is insured and the pollution certificates clearly state that it is not a cause of pollution and conforms to the set norms.
All counter arguments were banished and I was told to leave the vehicle and go home instead.
But how will I go home without the vehicle? I live 70 km away. To which the reply was: “Well, we will arrange an auto for you, nothing to worry.”

Nothing to worry? I had a vehicle while I left home and I shall return home empty-handed after having surrendered it to the authorities concerned, and that’s not supposed to be a worrisome situation? That too a car which is fit and fine, a car that has travelled to Kolkata of late without any glitches. Its fitness and abilities cannot be doubted or brought under scanner. After all, the word ‘old’ and ‘unfit’ are not synonyms. So why am I being compelled to junk it at all?

Shrinking life-span: A compelling desire to buy and a growing tendency to junk

The answer to such a question related to compulsive junking can be found in our relationship with the material world, which has fundamentally altered in the last three decades. Consumer sensibilities have taken such a massive turn that ‘old is gold’ seems to be a ghost from the past. The fetish for the ‘new’ and ‘improved’ has faded the aura of the ‘old’ forever. Technology is preoccupied with imagining things that are no longer built to last, but lasts only till the next series of wish-list triggers the consumer imagination.

Disposing, discarding and abandoning are integral to the ephemeral scheme of things. Becoming uninterested is fundamental to the shrinking life span of things that we are constantly flirting with. Trashing-tendency is the new operative principle. Throw-away-ethic is the sacrosanct market-mantra that drives consumerism. Strategies of instant gratification depend heavily on the shrinking time between retail-shelves and trash-bins. Caught in the self-indulgent circle of desiring-consuming-throwing, we are creating tons of trash that struggle to disappear. As we constantly embrace the new and discard the old, we are producing more and more junk that is finding tougher and tougher to find a space to hide.

Unless the market convinces consumers to willingly discard and disassociate, how can it possibly introduce the apparently ‘advanced’ and ‘improved’ versions? In fact the expiry date that you find imprinted on the body of most commodities is nothing but society’s legitimate right to declare it dead after a certain time. A commodity is born with a pre-fixed date of being rendered useless.

The homelessness of the discarded: Where will they go?

It’s a known fact that the idea of planned obsolescence is intrinsic to consumer-culture. In the processes of creating and sustaining a cyclic desire for the ‘new’, the market has to constantly declare its predecessor ‘obsolete’. It is still understandable when the market engages its consumers in an orgy of one-night stands with commodities. But when policies follow similar paths, that too under the pretence of posing to solve a problem (which it cannot possibly solve this way), then it sets a wrong precedence. What we are witnessing is a classic case of forced obsolescence that is currently being institutionalised.

And as if the junk-load of poly bags, e-waste, wrappers, bottles, batteries, Coke cans were not enough, now we need an added junk-load of rejected automobiles. Thanks to the imposed regulatory norms of compulsive-junking that declare private vehicles that are more than 10-15 years as illegal in our metropolitan cities, and compels such vehicles to be junked. Unfortunately unlike products that are designed for one-time-use, consumers tend to have a much stronger association with a vehicle that still costs a substantial portion of middle-class savings. Even if we leave aside the burden of expenditure, such a restriction on life span of vehicles ends up creating more problems instead of solving any.

If the authorities ban use of vehicles that are 10-15 years old, it is invariably compelling consumers to compulsively produce thousands of tons of fresh junk. And if confiscated, what exactly is the fate of millions of such vehicles? In a space-cramped city, is there a designated location for carrying out dismantling and recycling processes? Are the concerned authorities responsible for this task of dismantling (eg, Mayapuri) equipped to handle the increased volume of redundant vehicles? And if the older vehicles continue to have relatively higher resale value in smaller towns and villages, are we not outsourcing Delhi’s pollution elsewhere?

The flawed relationship between ‘age’ and ‘environment’: Why is age a parameter at all?

When the fitness standards are set by the authorities, measured and certified by its agents, the relationship between ‘age’ of the vehicle and ‘pollution’ that it contributes to could not be more baffling. Why compel consumers to junk fully functional, well-kept and non-polluting vehicles that meet set parameters of fitness? Why not allow fit and non-polluting vehicles to ply or re-register irrespective of their age? Why are we creating more junk by forcing people to get rid of an absolutely able machine? And why is ‘age’ at all a parameter to determine obsolescence, and not the number of kilometers that the vehicle has covered in its lifetime? If a vehicle meets fitness parameters that are set, measured and certified by authorities concerned, then why penalise the citizens? If the vehicle is not a cause of air pollution, why presume it is, if it happens to be more than 10-15 years old?

If your vehicle is non-pollutant according to given standards, how does it matter whether it is 15 years old or 50 years? If you are still forced to render it obsolete, it only indicates regulatory authorities’ lack of faith in its own regimes of certification and verification. Doesn’t it make more sense to make the parameters increasingly more stringent as the vehicle ages, instead of creating bizarre policies that favour periodic production of massive junk, or compel people to become compulsive discarders? Commodities are born with dates of expiry, which is society’s legitimacy to demolish it after a certain age. But to force people to throw away a perfectly healthy vehicle that meets set standards is not just insane but absolutely unethical. All the more when several credible research results have repeatedly shown that private vehicles’ contribution to air pollution is truly minuscule even in the pollution-capital of India.

Whose benefit and whose burden? The missing demand for an evolved and efficient public transport

It is not a matter of great coincidence that Maruti has aggressively launched more than half a dozen new models since the National Green Tribunal’s restrictions were announced in 2014. The difference between on-road price and ex-showroom prices (much of it is the road-tax component) has also increased manifold in these four years. Certainly the departments concerned and the manufacturers directly benefit from this policy in the form of taxes or profits. However, the silence around this issue and lack of resistance against such a policy is not so surprising as the purchasing power of the middle classes have sufficiently increased, and the market has socialised us to discard and move on in the post-liberalisation phase. The relevance of a commodity is now in its ‘junk-ability’ as much as it in its ability to seduce the consumer.

The middle classes do not mind paying the bill of a regressive environmental policy that does nothing other than create more junk—more than what the society can possibly handle. It does not offer any solution, rather adds to the existing problems of congestion, pollution and blatant exhibitionism by incentivising car purchase.

If the policymakers are really serious about being progressive and preventive, why not de-incentivise purchase of private vehicles altogether, or invest heavily in making the public transport way more efficient, which would be a far more forward-looking stance, and a great equaliser too, instead of compelling people to junk and consume; consume and junk? Which is a true parameter of progression: who has how many cars and how big they are, or how many people use public transport? Why do we need cars at all that arrive at the showrooms along with an unalterable death certificate?

The answers lie in skewed ideas of ‘citizenship’ or rather the lack of it, which makes the authorities conceive the ‘governed’ not as equal ‘citizens’, but as ‘objects’ under scrutiny, who could then be taxed with extra burden of expenditures. The answer can also be found in an even more skewed notion of consumerism that poses the possession of a new car as a status symbol. Car as a commodity is not just a matter of convenience in India, but also an expression of purchasing power and an essential component of our consumer identities. If people are so very invested in the act of judging each other by the size and brand names of cars, then how would the demand for promoting public transport as an ideal-model emerge? And in the meanwhile, why won’t Mahindras and Mercedes, Tatas and Toyotas keep launching face-lifted versions of the same fetish?

The managers of the material world and the policymakers of the legal world want us to buy upgraded versions of about-to-be-junked materials, which are presumably faster, better and sexier fetish. Offering an evolved experience, the most ‘advanced’ cars of today will be forced to become ‘obsolete’ soon. As we willingly or unwillingly respond to the calls of consumerism, we live under the demented conditions of compulsive discarding. Replacing a car does not necessarily address the core environmental concerns. Instead it convinces us to have a good time and keep paying the bill for it, and eventually participate in the production of unmanageable mountain of trash.