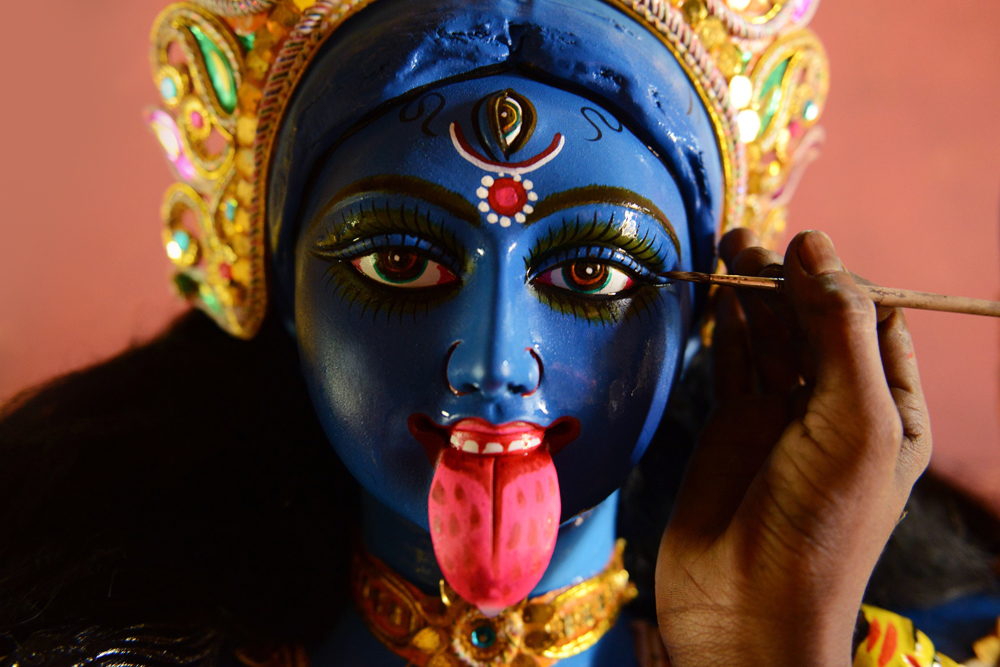 Kali is one of the most powerful divinities in the Hindu Pantheon. Ganesha, the charming pot-bellied remover of obstacles, easily propitiated with an offering of coconut, laddoo or modakam, is unmistakable with His signature Elephant Head. Kali, with Her lolling tongue, skull garland and girdle of severed hands, is equally identifiable.

However, unlike Ganesha, Kali has an exceptionally bad Press. In a country that approves of a fair complexion, Kali is unapologetically black. Shyama, Kala-Raathri, Neela all Her many names show Her to be dark, as is one of the meanings of Kali. But then, as in high school physics classes, black absorbs everything.

Her hair has the same DNA as Shiva’s dreadlocks. Indian women are often exhorted to tie up their long tresses, especially after nightfall. Not so Kali. Unlike the pristine Goddess of Learning Saraswathi or the buxom, domesticated Goddess of Wealth, Lakshmi, Kali is not bound by convention. Her hair, a gift from Yama, the God of Death, flies around all over the place. It signifies that death has no fixed timetable.

Her eyes are the sun and the moon. The former stands for masculinity, the latter for femininity. Both are equal in Her Eyes.

There is a third eye in the middle of Her forehead, much like a designer bindi. The area between the eyebrows, the Aajna Chakra, is considered to be the seat of knowledge. This is the penultimate position of the rising Kundalini, as it zooms up to an ecstatic union with the Sahasraarara Shiva, situated on the crown of the human head. When the sun’s rays pass through red colour (Sindoor), yellow colour (sandal paste) or white colour (Vibhuthi or holy ash), it activates this centre. This is the reason why both men and women in India wear a tika, most often with these materials.

Kali often has Her tongue hanging out, guarded by sharp teeth and fangs. This is a reminder to use the tongue for judicious speech or for prayer. Otherwise, the result could be painful.

The story goes that the Gods instigated Kali to kill a demon, by telling Her of his many sins. Kali was not prone to destruction suo moto. What She heard angered Her so much that Her rage would not die down even after the demon was killed. Shiva, the one God who was ever-ready to take upon Himself tough tasks for the welfare of the entire creation ( Remember He willingly swallowing the deadly poison Haalaahal when the ocean of milk was churned? ) offered to lay Himself down in Kali’s path. Roaring with rage, Kali stepped on the defenceless Shiva and was instantly contrite. Sticking Her tongue out was in fact the Divine equivalent to an ‘Oops!’

A long garland of skulls adorns Her chest. This is because love for Her exceeds all thought. True bhakti or love for the divine can come about only with the grace of the goddesses who negate all worries.

Kali wears a girdle of severed hands. This signifies the importance of karma. Very often it is the hands that bring about actual karma or doing. Think of the wars started by the press of a button, a hand held out in help, a slap, a handshake. Along with our thoughts, and our words, our actions are what makes our activities complete.

Kali is pictured as being naked. Digambara or being clad in the World. There are two aspects here. By being naked, Kali represents the unvarnished truth. When the very world is your garment, everything touches you, is on you.

There are many manifestations of the Goddess and each of them have their own unique sets of clothes, weaponry and means of Worship. Adi Shankara’s Soundaryalahari explains Her myriad weaponry beautifully in the Shloka that begins thus:

The gist of it is this. Why is it that unlike the other Gods, your hands are full of weapons and do not have the mudra (gesture) of abhaya (protection) and varadana (blessing)? He goes on to say that just by reaching your feet, both of the above are there!

A lot of controversy about Kali arises from ignorance or worse, incomplete knowledge. Because She is iconographically primed for destruction, many variants of Her are used for black magic, known variously as manthravaadam, jaadu-tona and kshudram. A naivedyam or bhog offering of milk and sugar in a silver vessel is Sattvik. In Kaliyuga, when harming and defeating enemies both real and imagined becomes imperative, there is a corresponding increase of people who use esoteric knowledge for “prayoga” or poojas against antagonists. Energy can neither be created nor destroyed. It can only change its form. Unless the person who dabbles in such activity is a great tapasvi (or ascetic, not swayed by money, power or fame ) it is as lethal as cooking while unprotected in a kitchen, with radioactive elements. The backlash on the one who instigates it as well as the one who performs it could be disastrous.

The other aspect of Kali erroneously marketed by the West is that of Tantra. Tantra has become synonymous with sex. It is true that Kali mounting an acquiescing Shiva is totally unlike the demure Shaktis of the other Gods. She awakens Shiva, the ascetic and makes Him into a family man, complete with children and an inclination to bless His devotees, rather than be indifferent to both worship and insults. Kali underlines female sexuality. She is certainly not the childbearing being, largely ignored and taken for granted that Indian womanhood has sadly become often pictured as.

The other “explosive” aspect about Her is the famous and much-maligned Pancha Makaara Pooja. This is literally a pooja with the five ‘M’s. Mantra (incantations) Mudra (gestures) Maamsa (meat) Madya (liquor) and Maithuna (sexual congress). The first one, Mudra, is pure sound energy, the vibrations of which bring about vast changes in the atmosphere itself. Mudras are a set of esoteric gestures that bring about a readiness in the human body to receive benediction. This includes Praanayama, or control of breathing, an activity common during working, resting, praying, fighting and all other mundane functions.

Maamsa and Madya stand for food and water, without which it is impossible to sustain life. It is liquor that is preferred to water in this case, as very often our surroundings will prevent us from having that “willing suspension of disbelief” so necessary for poetry and divinity. Liquor makes us shed our inhibitions. Imbibing comes under strict conditions of Saadhana, not to be confused with a bar binge. Maithuna shows the vibrancy of creation. A Shiva Latha Mudra, for example, is not a sexual orgy as it is a thorough understanding of and a respect for the human body and its miraculous capability for procreation.

Science can be used to annihilate as well as protect humankind. It is not science per se which is the culprit for destruction. It depends solely on the user. Likewise Kali can be seen as a divine assassin, reveling in excesses or She can be seen as a fierce but protective Mother, forever indulgent to Her devotees, as She, in reality, is.