A Study in Greatness

Gandhi and Mandela show us a path that remains ever relevant 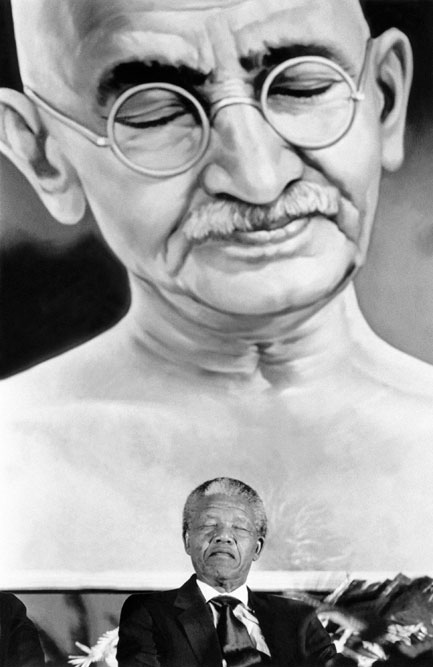 Two great men belonging to two successive generations have revolutionised world politics in the last century. As their influence went far beyond the countries they were from and spread all over the world in the past five decades, they became an inspiration to the struggles of oppressed people everywhere. They were Gandhi and Mandela: the Mahatma and Madiba. This year happens to be the 150th birth anniversary year of Gandhi and the birth centenary year of Mandela.

The two never met. When Gandhi died in 1948, Nelson Mandela was a budding leader in South Africa, starting off with little that Gandhi had lived and died for. But then Gandhi transformed Mandela. It was one of Gandhi’s biographies that Mandela came across during his long years in jail which turned South Africa’s one-time Marxist into a messiah of peace and non-violence.

During his lifetime, Gandhi had inspired thousands in India to adopt his path and work at mitigating the trials and tribulations of millions of citizens of this country. A single meeting with Gandhi would transform countless youngsters into Gandhians, ready to dedicate their lives to serving the poor. Such true Gandhians can still be found, not in the urban political landscape of India, but among the deprived in remote villages and forest habitations.

Like Gandhi, Mandela also had extraordinary charisma and a unique way to harness the power of people. Wherever the downtrodden discover their voice, we find such a leader as their inspiration. As Barack Obama, the first African-American to rise to the presidency of the United States, once said: “In my life, I have always looked to Mahatma Gandhi as an inspiration, because he embodies the kind of transformational change that can be made when ordinary people come together to do extraordinary things.” Obama added, “I believe in Nelson Mandela’s vision. I believe in a vision shared by Gandhi and King and Abraham Lincoln. I believe in a vision of equality, justice, freedom, and multi-racial democracy, built on the premise that all people are created equal. We have to follow Madiba’s example of persistence and of hope.”

Gandhi and Mandela were born to relatively well off families. Gandhi’s father was a Diwan in Gujarat, while Mandela’s family led a large clan in South Africa. Both had the benefit of a modern education and acquired law degrees. Neither chose to pursue lucre. Instead, they put themselves at the service of a cause. Even in their practice as lawyers, their approach was to aim for reconciliation rather than victory. Gandhi’s case was curiouser. He went to South Africa to fight a legal battle for an Indian immigrant there. The racial discrimination and abuse he had to endure taught him his first lessons in non-violence. For a long time he only fought for Indians, growing conscious of native rights much later; but when he embraced the cause of Black Africans, he firmly declared: “This land is theirs by birth.”

Similarly, Madiba had initially refrained from including Indians in his struggle, perhaps because of their image as a merchant class exploiting locals. But as his understanding grew, like Gandhi, he broadened his efforts and began to speak on behalf of all those in need of self-determination.

It was in South Africa, defending the fundamental rights of non-Whites to life and dignity, that Gandhi invented his weapon of Satyagraha, which he used so effectively in his fight against the British Raj. Thus, South Africa was the ‘karma bhumi’—land of karma—for both Gandhi and Mandela. Mandela once said that while India was Gandhi’s motherland, South Africa was the Indian leader’s adopted land. “The Mahatma is an integral part of our history because it is here that he first experimented with truth; here that he demonstrated his characteristic firmness in pursuit of justice; here that he developed Satyagraha as a philosophy and a method of struggle,” he said. “If Gandhi is the Father of Indian nation, he is the grandfather of South Africa,” commented a former South African diplomat.

THE TWO LEADERS WERE unique in their own ways. But Gandhi was a phenomenon. Albert Einstein once observed that “Generations to come will scarcely believe that such a one as this ever in flesh and blood walked upon this earth.”

They both lived transparent lives. Both spent long years in prison in their countries. Both practised a form of politics that didn’t have any place for rancour or retribution and strived to build inclusive societies. At the height of the agitation against the British, Gandhi wouldn’t hesitate to call the countrymen to support them during World War II. Mandela even afreed to share his Nobel Peace Prize with the leader of his country’s tormentors,0 FW de Klerk.

Gandhi and Mandela were both strong-willed leaders. They fought for truth and fairness in public life. For Gandhi, truth and non-violence was the mantra, while for Mandela truth and reconciliation was the way.

For Gandhi as well as for Mandela, the exalted goal of independence or self-rule was not merely a political struggle, but an inner spiritual journey. It is what led them to dedicate their lives and politics to those at the bottom of the pyramid. They sought to become one with the masses and live among them. Both led simple lives and did manual labour. They didn’t just preach, they lived out their ideals.

‘Mahatma Gandhi came and stood at the door of India’s destitute millions, clad as one of themselves, speaking to them in their language… who else has so unreservedly accepted the vast masses of the Indian people as his flesh and blood.. Truth awakened Truth,’ wrote Rabindranath Tagore. Once Gandhi returned to India in 1914, he gave up Western attire, opted to wear just a loin cloth and join the country’s teeming millions in their huts. This led to some consternation in his social circles. Some of his caste people even sought to ostracise him from their midst. But nothing would deter Gandhi in his life mission.

“I will give you a talisman,” Gandhi told his followers, “Whenever you are in doubt or when the self becomes too much with you, apply the following test: Recall the face of the poorest and the weakest man whom you may have seen and ask yourself if the step you contemplate is going to be of any use to him. Will he gain anything by it? Will it restore him to a control over his own life and destiny? In other words, will it lead to Swaraj for the hungry and spiritually starving millions? Then you will find your doubts and your self melting away.”

Mandela had similar principles. “There is nothing I fear more than waking up without a programme that will help me bring a little happiness to those with no resources, those who are poor, illiterate, and ridden with terminal disease,” he declared. Like Gandhiji, he believed that alleviation of poverty is not a matter of charity but of justice, because poverty is not natural, it’s man-made.

One important contribution of these two leaders was that their efforts contained the spread of ideologies like Communism and helped people resist materialism. Gandhi blocked a Communist takeover of the Congress-led independence struggle. Mandela, who was influenced by Marxism in the initial years, later realised its futility. He rejected an armed rebellion in favour of a peaceful struggle.

Since both Gandhi and Mandela pursued unconventional politics, they had many critics and sceptics. Disagreements over their policies and positions continue to this day, but their contributions are no less significant for them. During India’s freedom struggle, well known critics of his non-violence included Subhas Chandra Bose, who later formed the Azad Hind Fauj and led an armed rebellion against the British. A less known critic of Gandhi’s policies was his chosen heir, Jawaharlal Nehru. Nehru categorically rejected Gandhi’s ideas put out in Hind Swaraj advocating a village-centric development agenda for India. The differences became so acute that at one point Gandhi is recorded to have said, “Jawaharlal says he doesn’t understand my language. My language is foreign to him. But language is never a barrier in the union of hearts; when I am gone he will speak my language.”

In a letter to Nehru on October 5th, 1945, Gandhi writes: ‘The first thing I want to write about is the difference in outlook between us. If the difference is fundamental then I feel the public should also be made aware of it. It would be detrimental to our work for Swaraj to keep them in dark.’ In Nehru’s reply of October 9th, 1945, he says: ‘I do not understand why a village should necessarily embody truth and non-violence. A village, normally speaking, is backward intellectually and culturally and no progress can be made from a backward environment. Narrow-minded people are much more likely to be untruthful and violent.’

Mandela also had close critics, some from within his immediate family. Winnie Mandela, his wife, was against his adoption of Gandhian methods to fight racism. The couple’s views diverged when he was in jail and their differences eventually led to their divorce. Winnie publicly contradicted Nelson Mandel at an event in Germany, repudiating his call to the people of KwaZulu-Natal to throw their weapons into the sea. The way forward, for Winnie, was an armed struggle. She went to the extent of refusing to recognise the leadership of the African National Congress, Mandela’s party.

A PART OF THEIR greatness lay in their openness to criticism and their steadfastness of vision. It is this politics of transparency that is missing today. Thanks to the efforts of Gandhi and Mandela, untouchability and apartheid among people became history, but the new ill of political untouchability has surfaced. Hate has taken over political relations. Tolerance of criticism and of different viewpoints is what the world needs to re-learn from these two great leaders.

Gandhi’s himself was the architect of his approach, be it non-violence or Satyagraha. Mandela was lucky to have a Gandhi and a Martin Luther King Jr before him. However, where Gandhi ultimately failed to prevent the partition of India, Mandela succeeded in keeping his country united, thanks largely to the lessons learnt from his predecessors.

In a world trapped in a narrative shaped by material realities, Madiba and the Mahatma should awaken us to a deeper truth that comes not merely through political and economic programmes, but spiritual activity steeped in humane ideals and traditions. It’s their common values, their belief in introspective prayer, and their faith in the goodness of all creation that give both Gandhi and Mandela an influence that will last forever.