Padmavati: The Legend of the Queen

From Rajput valour to nationalist heroism, the story of Padmavati has a rich socio-cultural tradition 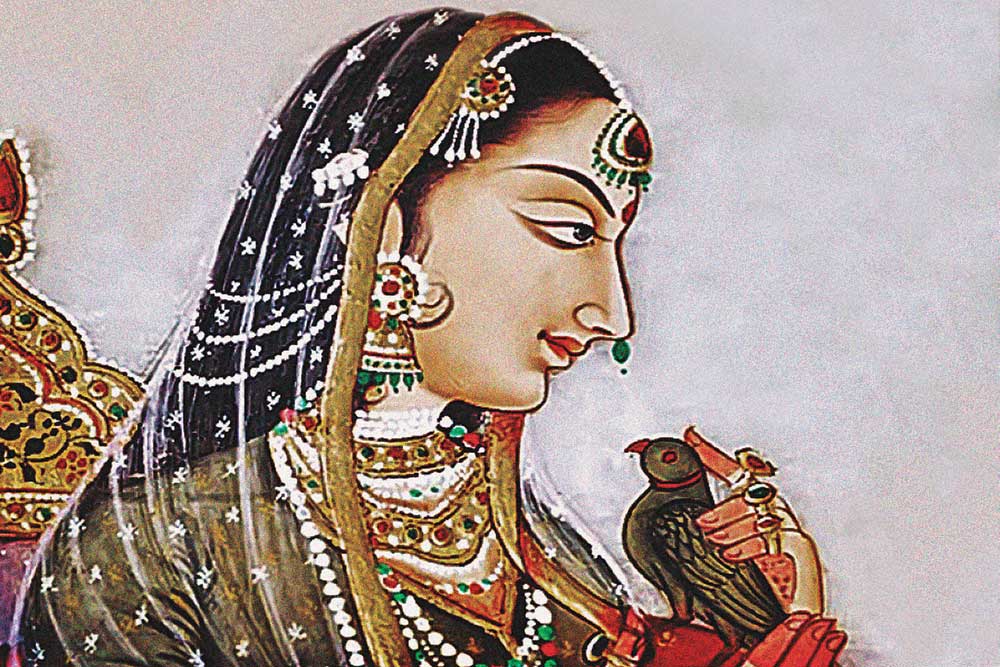 THE STORY OF Padmavati traces its roots to Malik Muhammad Jayasi’s poem Padmavat, written in 1540. Over the years, the story has evolved through countless retellings, and has been disseminated through oral, literary and other artistic mediums. The latest rendition of this story, the movie Padmavati directed by Sanjay Leela Bhansali, has been at the centre of a frenzied debate on a range of topics—community pride and honour, artistic freedom, myth vs/as history, among others. To better contextualise and understand this outrage, it is instructive to look deeper into the origins of the tale, and the layered socio-cultural milieu through which it has evolved.

Jayasi’s poem Padmavat can be located within the genre of Hindavi-Sufi romances or premakhyans, which formed part of an Indian Islamic literary culture in Muslim courts by the 14th century, and which continued in many regional courts. This genre was inspired by Persian courtly poetry and classical Indian literary traditions, especially the use of Sanskritic language of bhava (emotion) and rasa (essence of devotional experience). These romances were usually sung aloud in evening gatherings at Sufi hospices, shrines or in courtly assemblies.

In Padmavat, Padmavati is the princess of a paradise-like island, Singhala-dipa. Ratansen, the ruler of Chittor, hears about her beauty from Hiraman, a parrot who was Padmavati’s companion before being captured by a bird-catcher and brought to Chittor. Despite the protests of his mother and first wife, Nagmati, he becomes an ascetic and sets off to find Padmavati. He tries various strategies, first undertaking penance in the temple to Shiva, and then launching an attack on the Singhala fort during which he is captured. His identity is revealed just as he is about to be executed upon which he is rewarded with the hand of the princess in marriage, and returns to Chittor with Padmavati.

Aditya Behl’s work on Sufi romances notes that the genre is characterised by the seeker assuming the guise of a yogi to attain the divine. This formula is applied to Padmavat in which Ratansen’s quest to attain Padmavati in the guise of a yogi is also the journey of a Sufi along the mystic path. His union with Padmavati, therefore, is a mystical union.

To this fairly well-defined formulaic narrative (of premakhyan), Jayasi adds a concluding section on the siege of Chittor by Alauddin Khilji. In the story, the Brahmin Raghav Cetan, dismissed from the Chittor court by Ratansen, goes to Delhi and describes Padmavati’s beauty to Khilji, in an attempt to incite him into attacking Chittor. Khilji leads an army to Chittor, and demands the surrender of the queen, which is refused by Ratansen. Ratansen is, however, treacherously captured by Khilji and taken to Delhi, from where he is rescued by brave warriors from Chittor. During Ratansen’s absence, the ruler of a neighbouring Rajput state, Devpal, offers to marry Padmavati. When Ratansen comes to know of this on his return, he sets out to punish Devpal. Both are killed in single combat, leading Nagmati and Padmavati to commit sati. Khilji’s eventual conquest of Chittor is thus rendered hollow.

The march to Chittor as described in Padmavat, of a Khilji ‘lustful’ for Padmavati, is in contrast to the picture drawn by contemporary chroniclers Amir Khusrau and Ziauddin Barani. In their accounts, Khilji is presented as a ruler who successfully implemented price regulations, introduced market reforms and reorganised the army to defend the Delhi Sultanate from repeated Mongol incursions. During his reign, the territorial limits of the Sultanate expanded with the conquest of regions in modern-day Gujarat, Rajasthan, Malwa and Maharashtra, and Khilji even adopting the title Sikander-i-Sani (the second Alexander). It is also worth noting that Barani’s account of Khilji does not present him as a pious ruler. In fact, he disapproved of Khilji’s disregard for sharia as the basis of governance and expansion of the social base of the ruling class to include people of ‘lowly’ birth.

When Padmavat was composed in Jayas of modern Uttar Pradesh around 200 years after the death of Khilji, the motive behind his conquests were reimagined. As noted by Ramya Sreenivasan in The Many Lives of a Rajput Princess: Heroic Pasts in India c. 1500- 1900, the patronage for Jayasi came from Rajput elites who claimed lineal descent from older Rajput lineages defeated by Khilji. For these Rajput states of the 15th and 16th centuries, concerned by ceaseless competitive warfare with other Rajput and non-Rajput states, kul (lineage) cohesion and family solidarity based on kinship was crucial for political and military success. Marriage alliances consolidated state power with the ruler gaining military support of his wife’s natal lineage. In this context, marriage relations formed part of a system of gaining land, influence, power, honour, status and alliances, writes Kumkum Sangari. It is in such a socio-cultural milieu that women became important as strategic assets and their protection defined the honour of the lineage. Thus, the concerns of Rajput patrons in the 16th century glorification of Rajput bravery, protection of women—were reflected in Jayasi’s work.

In the early 19th century as British power was expanding into Rajput kingdoms of Northern India, James Tod, an East India Company officer and political agent to the Western Rajput states, set himself the task of writing a history of the Rajputs. His work, Annals and Antiquities of Rajasthan, used mythology, epics and bardic narratives that described the military and heroic character of Rajputs as historical evidence. His romanticised depiction of the historical Rajputs as a race and ‘nation’ defined by ideals of valour, honour and glory also influenced the story of Padmavati, now Padmini. In Annals, Bhimsi the uncle of Chittor’s ruler Lakhamsi, not Ratansen, is Padmini’s husband. The Sufi allegory is left out as the fabled land of Singhala-dipa becomes Ceylon (Sri Lanka). For Tod, the story of Padmini, was a story of male and female heroism—Rajput warriors who chose certain death in battle while the self immolation of women was proof of their heroic character. Annals also developed the narrative which placed Khilji as an evil zealot. Tod’s rendition is aligned with the values of 19th century Rajput polity, specifically the crystallisation of Rajput honour and identity around sati and jauhar (mass immolation), and the recasting of earlier conflicts with the Mughals as Hindu resistance to a ‘Mahomedan dynasty’.

THE STORIES AND Image of the heroic Rajputs in Tod’s Annals had immense influence on Bengali intellectuals in the 19th and 20th centuries. During a time of heightened political consciousness, spread of English education and flourishing of vernacular print culture, Rajputs were transformed into inspirational historic images in the rhetoric and literature of the nationalist movement. Rangalal Bandopadhyay’s verse narrative, Padmini Upakhyan (1858) was the earliest interpretation of the story of Padmini in Bengal, appearing a year after the Rebellion of 1857. Subsequent versions include plays Sarojini ba Chitor Akraman (1875) by Jyotirindranath Tagore and Padmini (1906) by Kshirod Prasad Vidyavinod, the latter appearing during the height of the Swadeshi movement in Bengal. These writings and plays inspired by interpretations of Rajput history, notes Ramya Sreenivasan, were used to celebrate valiant patriots resisting unjust tyrants.

For instance, in the 1912 article ‘Chitore’ by Sister Nivedita, student of Swami Vivekananda who became active in the Ramakrishna Mission in the late 1890s, Chittor represented the heroic aspect not simply of Rajputs, but of Indians as a whole. For the Bengali bhadralok who were actively engaged with these genres, women were symbols of tradition whose acts of sati best represented their devotion to their husbands. The act of sacrifice by Padmini preserved her chastity and the community’s honour. Her story now signified the desired norms for the new nation.

The story of Padmavati has served several means in its long and vibrant lifetime. Starting out as an aide to claim lineal descent and glorify Rajput valour, it went on to play its part in arousing nationalist sentiments, thriving across genres with ease. The answer to what her story represents today may perhaps best be found in the din of protests around the film, and the film itself. Accusations of ‘distortion of history’ and ‘hurting Rajput sentiments’ reveal the anxieties to preserve and protect the Rajput order in public consciousness, not unlike the interests of the original patrons of Jayasi.