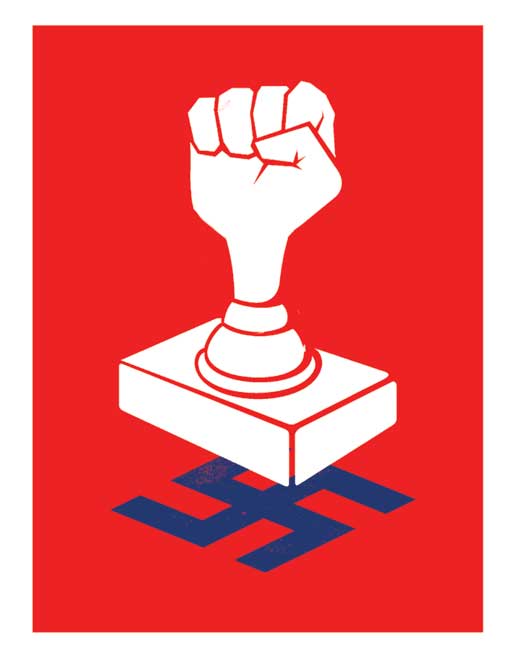 EVERY DAY, PEOPLE wake up around the world to be greeted with headlines labelling politicians ‘Nazis’, ‘fascists’ and ‘murderers’. Policies are routinely compared to those of the Third Reich. Of late, I’ve seen the process of detaining illegal immigrants entering the United States be compared to the Nazis’ systematic round-up and extermination of Jewish people. I’ve read that the retirement of Supreme Court Justice Anthony Kennedy means that America will now succumb to fascism, but this time it’s definitely happening for real— although I was under the impression that the US must already be a fascist state, as I was told that Trump’s election, the appointment of Justice Gorsuch and so many of Trump’s other actions have meant the death of American democracy.

Around the globe, the same stories are repeated.

Brexit is commonly labelled a racist decision, with its supporters being called uneducated bigots. There are attempts to use the word ‘Gammon’ as a slur against Brexit voters. Ironically, this campaign is led by the very same man who rallied against the derogatory term ‘Chav’ that was so commonly used against young troublemaking British people.

In India, we see people asking whether the country can still be considered a democracy. Routinely, Prime Minister Narendra Modi is compared to ‘strongman’ leaders of other countries, such as Xi Jinping of China and Vladimir Putin of Russia, which we all know is an attempt to deny Modi’s democratic legitimacy.

Even outside the bubble of the liberal elite, people seem to be parroting these narratives. The number of times I’ve seen the labels of ‘Nazi’, ‘fascist’, ‘racist’ or ‘bigot’ thrown around at people for expressing any opinion right of centre, sometimes even left of centre, is higher than I know how to count, as my Brexit vote means I am too uneducated to keep track of such large numbers. There is always a sense of shock when people find out I voted to leave the European Union. People expect to find an uneducated racist wanting to take Britain back to the 1950s. They can then only assume I regret my choice, and that I must somehow want to undo the United Kingdom’s decision to leave an organisation that usurps democratic will, erodes national identity, restricts competitive economic policy and charges a hefty fee for honour.

The prejudice against right-wing opinions and people manifests itself in even more extreme forms. We’ve witnessed Congresswoman Maxine Waters encourage the harassments of Trump officials. Even within the UK, MP Jacob Rees-Mogg was involved in a violent scuffle when leftist protestors disrupted an event he was attending at Bristol. Politicians have been victims of serious violence too, with US Senator Rand Paul being attacked by his neighbour, and Congressman Steve Scalise being shot while practising for a baseball match.

It is hard to see the UK or India morphing into Nazi Germany, or really do anything that is actually worthy of deeming them fascist states. Yet, this rhetoric continues to alarming effect. It seems that the people making these claims have fallen victim to their own rhetoric. They genuinely believe that democracy is at risk and they are valiant warriors defending freedom with their keyboards, by dressing up as vaginas at anti-Trump rallies or by attacking people wearing ‘Make-America-Great-Again’ hats on the street.

Alarmingly, those crying wolf actually believe there to be a wolf, when there is only an opinion they disagree with. They’re unable to tell the difference between democratic decisions and a totalitarian dictatorship. Legitimate criticisms of right-wing policies and leaders are increasingly rare, and get lost in a sea of hyperbolic nonsense. The echo chamber only gets worse, and the polarisation greater.

The collective frenzy of denouncing leaders, like Modi and Trump, as fascists and anti-democratic will inevitably result in the same problem as the boy who had his flock of sheep eaten after crying wolf so often. People are already starting to no longer believe the cries and crocodile tears that fill our newsfeeds. But worst of all, when genuine fascism does rear its ugly head, the media’s warnings will fall on deaf ears. In the last few months alone, I’ve heard that Matteo Salvini of Italy, Heinz-Christian Strache of Austria and Janez Jansa of Slovenia, all have fascist and racist tendencies. From what I’ve managed to read between the lines, these leaders are just part of the same global forces that led to Trump and Brexit, and do not represent the first steps down the road to dictatorship. However, when real risks do appear, I am afraid we will not know what to believe, as we’ve all been falsely warned about a wolf in the sheep’s pen so many times before.