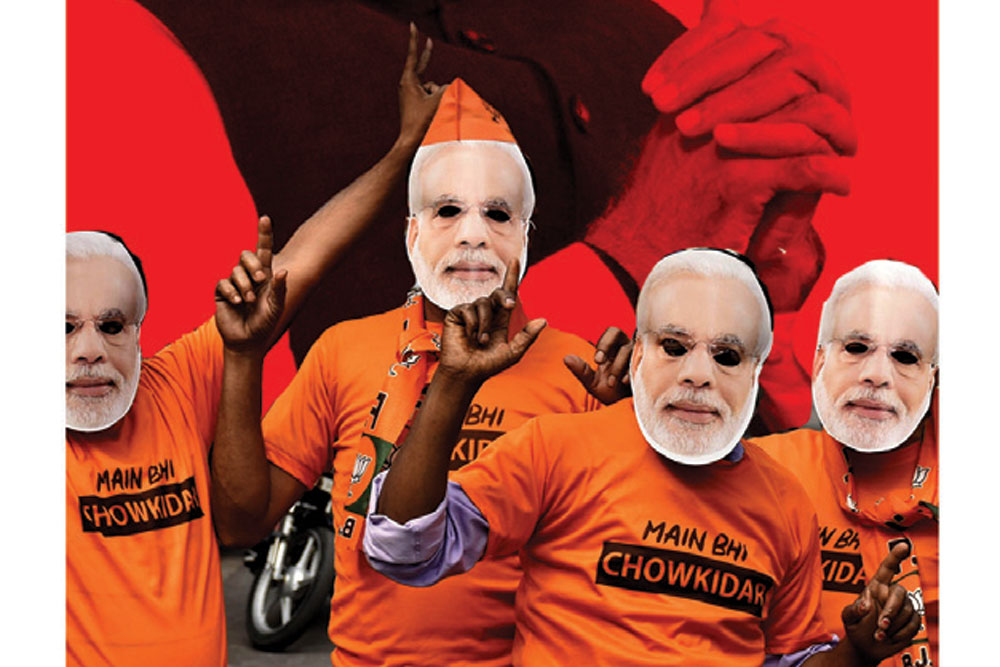 TRUE: A SENSE OF alarmism pervades the world inhabited by those who still think the Age of Modi has brought out the worst instincts of Indian democracy. It is a world painted to perfection, where the debris of institutions that had kept national sanity intact till the collapse of Weimar India in 2014 is as horrifying as the bloodlust of Hindu vigilantism on an industrial scale. It is a world where India’s most popular politician is an error of history—dismiss him with a high-moral shrug rather than ask why he has happened, and what makes him what he is. The inhabitants of this world desperately need the looming shadow of an unforgiving autocrat to nourish their conscience. In their world, dissent is effortless ventriloquism.
Also True: There are people out there who think that the above world needs to be discredited and destroyed, for it’s the most annoying distraction from Ram’s Ruritania. These are people who demand total submission, and see questions as subversion, or even sedition. They are the guardians of the restored Hindu Ideal, the most tangible civilisational achievement of Modi. They need enemies, for enemies are a perquisite for the preservation of the unipolar world, whether it’s defined by ideology or theology. They prowl the street, float anonymously in the cyber sewer, and what they pass off as argument is received nonsense. Their nation belongs to those who have passed the loyalty test. A good amount of fear, they believe, consolidates nationalist piety. They have to remain vigilant.


These are the twin realities of the great Indian exaggeration. When a group of writers and filmmakers wrote to the Prime Minister asking for his intervention to stop religious lynching, someone from the second world described above thought it was an act of sedition. It was an act of stupidity from a devotee of the sacred nation. What was on display was the same mindset that saw the nation collapsing under the weight of a book, written by a Rushdie or a Doniger or some other blasphemer, or a film. Somehow, the sedition junkie has become, in the eyes of the endangered dissenters, the official spokesman of what Mark Twain would have called ‘lyncherdom’. The sedition-monger stood out because there was no informed—and elegant—counterpoint to the petitioners. The space of argument has been taken over by the screaming class and digital troglodytes, claiming complete copyright over ‘national character’, which looks so fragile and vulnerable whenever they scream. Inevitably, the shadow establishment of cultural vigilantes hogs the headlines when the intellectual Right keeps a safe distance from problematic subjects.

So it was admirable to hear Mohan Bhagwat, the RSS sarsanghchalak, talking about the taboo subject of the cultural Right: lynching. He was not off the mark when he said that lynching has a non-Indian cultural origin. It is a word legitimised by the racial history of the American South. Trial by mobs preceded the show trials of Soviet vintage in the long history of perverse justice. The north Indian countryside is not what the American South was in the late nineteenth century or the early twentieth century. It is not free of the politics of hate either and, if you are not weighed down by semantics, mob violence can be a real threat to those who don’t conform. The mob doesn’t define national character. The mob steals the national argument from nationalists who refuse to speak up. Small mercy. Bhagwat spoke up, even if tentatively, even if he is irritated by the English word.

I don’t think the Prime Minister should be particularly worried about eminent signatures, and as the winner of the world’s biggest mandate in an uncontrolled democracy, it would be gracious of him to listen to them with the respect they deserve. And he doesn’t look worried anyway. He should be worried about the shouters, the trolls, the self-chosen keepers of a mandate singularly won by him. Their crudeness clashes with his innate sophistication—and his campaign at home and abroad. They provide him with all the bad headlines. He is not what they paint with such ungainly flourish. He doesn’t make his Hinduism a rhetorical weapon—or intimidating exhibitionism. What undermines him and his message is not the grievance of a signature but the violence and vulgarism of those who demand a Uniform Behavioural Code. The magnitude of the mandate, and the political and diplomatic diligence with which he preserves it, tells the most definitive story of change after Independence—and it remains a story not fully comprehended by his interpreters and detractors.

The story of Narendra Modi doesn’t deserve to be told so badly by some of his cheerleaders. For the sake of his legacy, such storytelling should be made a cultural crime.