The Theatrics of the Light and Sound-Show 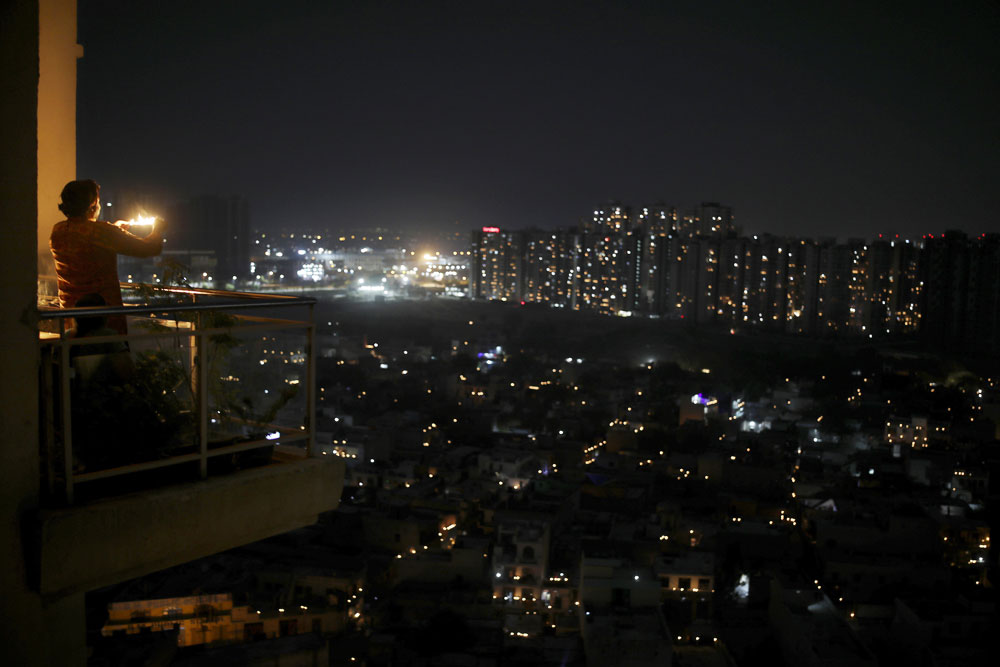 House-arrest is the new norm for most of us. Market slumps and mutual fund losses is the new normal for the middle classes. Masses going hungry and jobless is the new inevitable for the poor. A global crisis of an unprecedented scale has proved, yet again, that citizens were never equal. It is an age-old divide, now seen in the light of a new crisis. Being unable to see through this chaos is the new status of our defencelessness. It took an omnipresent yet invisible virus to cast a dark shadow on the present and future of capitalism and putanindefinite question mark on oursurvival too. Keeping the obvious and the universal aside, let us focus on the immediate and the everyday, for a change.

Like the 12th man sitting on the peripheral benches, a part of our built environment—has witnessed a meteoric rise in the last couple of weeks. Usually used for drying clothes, or for dumping discards, or for nurturing small-scale token-gardening motifs, or to exchange mutual gazes and small talks with our neighbours—the ‘balcony’, (if available), was never ever so significant. On occasions, it may have provided a breath of fresh air, or a glimpse of the rainfall pouring through the narrow in-between-balcony-spaces, or an unexpected glance of the next-door boy or girl, but the balcony always played a second fiddle. Compared to the intimacy of the bedroom; or the necessity of the bathroom and the kitchen; or the socializing obligations of the drawing room; and the expanse and exposure of the terrace—the balcony was somewhat distantpariah. One could do without a balcony, if the builders did not make any provision for it.

The sound check that followed the Janta-Curfew climaxed into loud clappings. Decibel levels grew louder and louder, as the janta indulged in heavy-metal banging.The sonic solidarity transcended beyond the balconies, and overflowed onto the streets, just like some post-match euphoria—which defeated the very purpose of the curfew, and crushed the objective of physical-distancing.Enthusiasts believed in auspicious sonic-surgical-strikes, which could magically or mythically eradicate the deadly virus we are up against.

Only the privileged few have balconies, by the way. While those entitled-few were banging thalis from their balconies, millions of migrant workers were either stranded, or were struggling to get back to their villages. Hunger, thirst, insecurity, fatigue and the burden of elementary baggage accompanied their unsure journey. Their road and their return were literally and metaphorically unsound. But with OUR food supplies assured and intact for the time being, and with OUR broad-bands sufficiently topped-up either for entertainment or for Work From Home—we could afford to take a balcony-break, and do some ceremonial bang-bang. As we were told to; as we proudly did; as infants usually need to be invoked by their guardians.

We heard the Dolby noise of ‘populism’ arriving from multiple corners of OUR societies on March 22. Who said theatres are shut? Theatrics have entered our collective conscience—we are witnessing each other perform—with privileged access to balcony tickets. Balconies are the new colonies of faith and loyalty. After a few months from now, if we survive, we will definitely continue to remain highly infected by a virus called ‘suspension of scientific-belief’.

On April 5, there was another appeal for dispelling the darkness around a pandemic with collective candle lighting.Did it illuminate the darks roads to nowhere, on which the millions of poor are relentlessly walking? Or those dark quarantined tents, where they are stuck for now?But Citizens should stop getting drifted, and stop asking any such questions. They should rather adhere to the 9 am, 9 pm, 9 minute sermons. They should switch-off theirlights; remain in the dark, so that they can see the light at the end of coveted-Covid-tunnel.  Let the preacher shed the light. And everything will be alright.After-all, light travels faster than sound. It also produces some heat, which could beat the virus hands down. If the sound could not do it, the lights definitely will. We are amidst the theatrics of some spectacular weekly light and sound show even though an all pervasive darkness looms large.

Rangolis, artis, charnamrits may follow soon in our indigenous ways to combat Covid-19. Cow-piss is leading the way anyway in several parts of the country. For Covid’s sake, the Khan Market-gang should stop getting frustrated with all this. Rituals and rationality rarely go hand in hand—that much they must have learnt to live with, by now.

Sreedeep
Sreedeep is a Sociologist with Shiv Nadar University. He is the author of ‘Consumerist Encounters: Flirting with Things and Images’—forthcoming from Oxford University Press

Unmasking an Array of Brands

Can Covid Change the Way We Date and Mate?