Modi came to power by demolishing taboos. Some of his one-dimensional followers want to create new ones 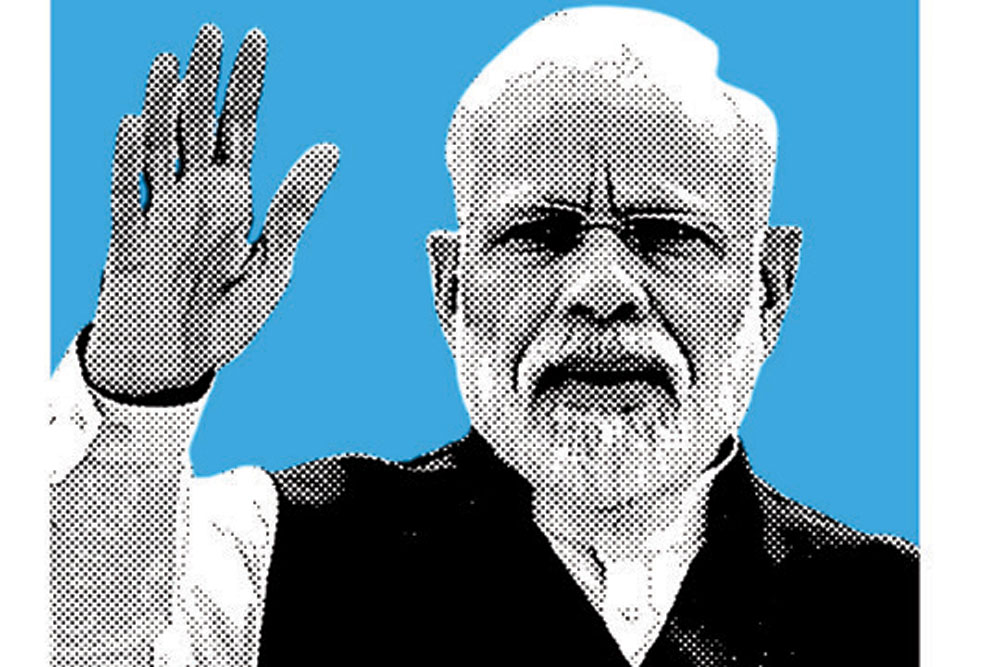 IN THE REPUBLIC of Hurt, there is a weary predictability about the offended, the one who feels threatened by the impurities and insensitivities of the so-called secular imagination. When the offended opens a book, or when the offending passage is transmitted to him from someone who had opened the book somewhere else, or when he sees a film of ungodly provocations, he sees gods desecrated, culture ridiculed, his very existence as a proud receptacle of a sacred tradition shaken. His religion is so fragile that it may collapse under the weight of a hardback or a film. He never realises that his cultural insecurities are an affront to the scriptures he has not read. He dreads stories.

The sword of the offended hung over the blasphemer when a religion matched its extraterritorial terror with its war on imagination. We can easily fill this page with writers and filmmakers who were banished or silenced by god’s ombudsmen. In the blood rites of the offended religion, words and images that even remotely contradict the enforced certainties of the Book are worthy of the sword. Salman Rushdie barely survived the attack, more than three decades after the publication of the offending novel. The spirit of Ayatollah Khomeini, who desperately needed a book he came to know about after the bonfire of the profane in Karachi and Bradford, still haunts the world of dangerous ideas. Lately, ‘wokeful’ guardians of the hurt sentiments—cultural, religious and racial—are as alert as their counterparts in scriptural zealotry in cancelling the offenders, particularly in academia.


Power may be a permanent campaign in Modi’s India, but the refinement that the prime minister exudes is absent from some of his ardent votaries who believe that a political campaign needs the darkest bogeyman

Hinduism is not supervised by the authorised interpreter of the only Book. It doesn’t enforce the sacred through the unforgiving guardians of the faith. Its stories, as told in the epic imaginations of men, humanise gods and vice versa. Which doesn’t stop self-chosen custodians of Hindu values from looking for offenders. In the name of a religion which is unique in its indebtedness to the multiplicity of imagination, they, miming the blasphemy-busters from the Islamic world, have launched a campaign for saving Hinduism from cultural corruption. The source of their sense of hurt can be as silly as the colour of someone’s underwear in a Hindi film sequence. Endangered Hinduism is a false fear.

It comes from a sense of cultural empowerment after the year that changed everything, from the nature of the nation to the confidence in a religious identity. In 2014, the grievance of the Hindu was settled by democracy. For so long a silent majority felt defensive about its cultural ancestry, and, in the loftiness of socialist ethos institutionalised by the original nation-builders, it was sinful in the secular state to allow politics to have a religious content, unless it was meant to appease marginalised communities. Still, Hindu nationalists are not given the open-minded treatment that, say, the Christian Democrats get in international conversations. The apostles of endangered Hinduism, the avenging fringe still tapping into grievance, contribute to the persistence of this blinkered view.

They are still chasing the wrong enemies, like a Hindi film. Prime Minister Narendra Modi himself has now reminded them that their irrelevant causes are undoing his achievements and shifting attention from his mission of creating a new India. The unhinged fringe of the cultural right has an entirely different India to protect, an India where the Hindu is still under attack, and where the freedom struggle of the faithful is not yet over. An India where cultural taboos are necessary for the survival of the national soul. What Modi has implied is that at this point in national evolution, the struggle for freedom cannot be defined by religion alone, that the fight against phantoms brings no rewards. The confident Hindu can afford to de-emphasise the religious identity in his social and cultural relationships. Grievance is an entrapment. Modi has asked him to move on, lest he be distracted by movie posters. Modi came to power by demolishing taboos. Some of his one-dimensional followers want to create new ones. They impede the progress of the moderniser.

In the end it all comes down to the sophistication in the management of power and the crudeness in the fringe’s expression of empowerment. Power may be a permanent campaign in Modi’s India, but the refinement that the prime minister exudes is absent from some of his ardent votaries who believe that a political campaign needs the darkest bogeyman. The prime minister remains the saving grace—and that is why India continues to sway to his tune alone.