The many Gitas of the Mahabharata 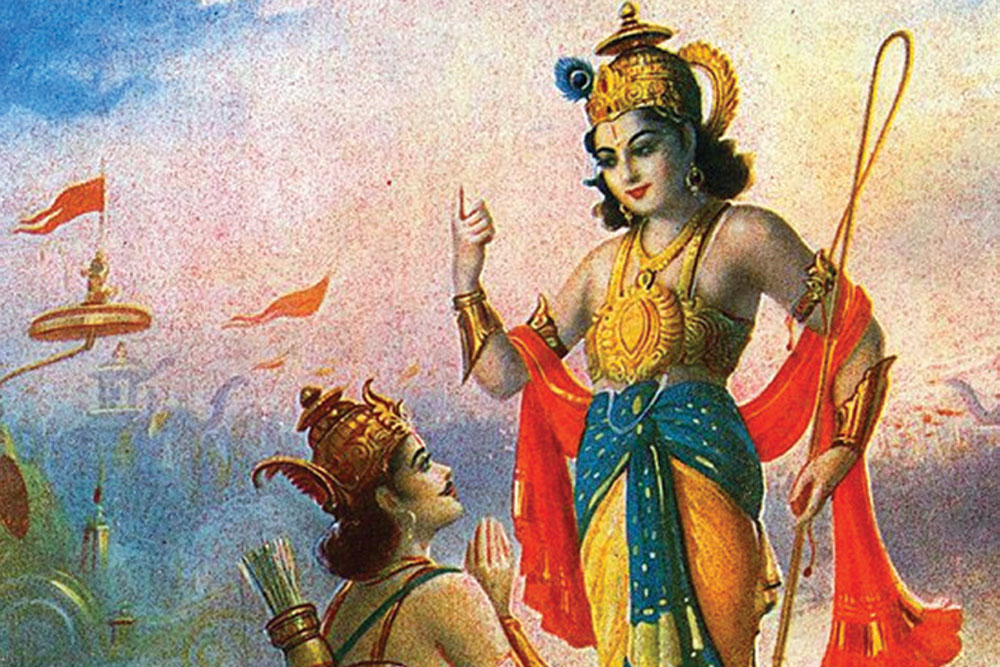 Vasudeva said, ‘O descendant of the Bharata lineage! One does not obtain success by giving up external objects. Success may or may not be obtained by giving up physical objects. Even if one is freed from external objects, one may still hanker after the body. Let the dharma and happiness that result from this be the lot of the enemy. The word ‘mrityu’ has two syllables. [‘Mrityu’ means death and consists of the syllables ‘mrit’ and ‘yu’.] The eternal brahman has three syllables. [‘Shasvata’ means eternal, consisting of the syllables ‘shas’, ‘va’ and ‘ta’.] A sense of ownership has two syllables and represents death. [‘Mama’ means mine and has the two syllables ‘ma’ and ‘ma’. ‘Namama’ is lack of ownership and has the three syllables ‘na’, ‘ma’ and ‘ma’.] A lack of ownership is eternal. O king! Both ‘mrityu’ and the brahman are inside all creatures, though they are invisible. There is no doubt that they are fighting with each other. O descendant of the Bharata lineage! If it is true that the atman is indestructible and eternal, then no injury results if one strikes the physical bodies of creatures. Even after having obtained the earth with all its mobile and immobile objects, if a person has no sense of ownership, there is nothing else left for him to do. O Partha! But there may be a person who dwells in the forest, surviving on forest fare. If he still possesses a sense of ownership in objects, he is in the jaws of death. O descendant of the Bharata lineage! Behold the nature of external and internal enemies. If a person does not see these in creatures, he is freed from great fear. In this world, those with desire in the soul are not praised. But without desire, there can be no inclination towards action. It is because of desire that one often undertakes the rites of the Vedas, donations, studying the Vedas and austerities. Know that vows, sacrifices, rules, meditation and yoga are not begun because of desire. That which is not undertaken because of desire is dharma.
Something with rules as the foundation does not constitute dharma.’

Though what Krishna told Yudhishthira is part of the chapter known as ‘Kama Gita’, ‘Kama Gita’ proper starts now. Vasudeva continued, ‘Those who know about the ancient accounts have chanted the Kama Gita in this connection. [‘Kama Gita’ is something recited by Kama, desire personified. This is not an easy translation. But the sense is that desire cannot be conquered without non-attachment.] O Yudhishthira! Listen to that being recounted in its entirety.’

Krishna concluded, ‘Therefore, you should desire to perform a sacrifice with many kinds of dakshina. O great king! Act in accordance with dharma, and kama will also be served by that. Perform a horse sacrifice with the prescribed kinds of dakshina. Perform the other different sacrifices, prosperous with offerings of dakshina. Do not look towards your slain relatives and be repeatedly distressed. You are incapable of again seeing those who have been killed in this field of battle. Perform great sacrifices, rich with offerings of copious quantities of dakshina. You will then obtain fame in this world and go to the supreme destination after death.’

This ends ‘Kama Gita’. As I said, I find this is extremely profound in what it says about it being difficult to overcome desire. But I said I want to make a broader point. Hinduism has many major texts, some of the sruti variety and some of the smriti variety. Hinduism doesn’t have one single text or holy book. There are multiple texts. However, forced to choose a single text that encapsulates Hinduism, most people will mention the Bhagavat Gita. It is important. It may be important, but it is a smriti text. It doesn’t belong to the sruti category. Having said this, there are three texts (referred to as trayi or the three texts) that capture the essence of Hinduism, or the Vedanta variety of Hinduism: the Upanisads, Brahmasutra (composed by Badarayana) and the Bhagavat Gita. One shouldn’t form the impression that the Bhagavat Gita is the only Gita. Indeed, the qualification ‘Bhagavat’ does suggest there are other Gitas. There are other such ‘songs’. Not all of those Gitas are in the Mahabharata, but several of them are. The ‘Kama Gita’ is one of those Gitas in the Mahabharata. How many Gitas are there in the Mahabharata? It is difficult to answer that question, since ‘Gita’ is not clearly defined, except for the Anu Gita and the answer depends on how one counts a Gita. One possible list is Anu Gita, Atathya Gita, Rishabha Gita, Kama Gita, Dharma Vyadha Gita, Parashara Gita, Bodhya Gita, Brahmana Gita, Manki Gita, Yajnavalkya Gita, Vamadeva Gita, Vichakhnu Gita, Vritra Gita, Shampaka Gita, Shanga Gita, Hamsa Gita and Harita Gita. I have mentioned several of these already in these columns.

Many years ago, MR Yardi did a statistical test on the Mahabharata and on the Bhagavat Gita. I will recommend two books of his, both published by Bhandarkar Oriential Research Institute: The Mahabharata: Its Genesis and Growth (A Statistical Study) in 1986 and The Bhagavadgita as a Synthesis in 1991. On multiple authorship of the Bhagavat Gita, he published a paper, ‘Theories of Multiple Authorship of the Bhagavadgita’, in Annals of the Bhandarkar Oriental Research Institute in 1977-78. To quote briefly from his Bhagavat Gita book, ‘The question whether the Gita was composed by one or more authors has been a matter of dispute among scholars. … With the development of tests of homogeneity in the theory of statistics, it has now become possible to apply objective tests to the determination of authorship problems. A statistical study of the Anustubh style of the adhyayas of the Gita undertaken by this author shows that the variations of this style as between the 18 adhyayas are not significant to justify the assumption of its multiple authorship.’