From biopics of sportstars to matters of the heart, 2020 has it all 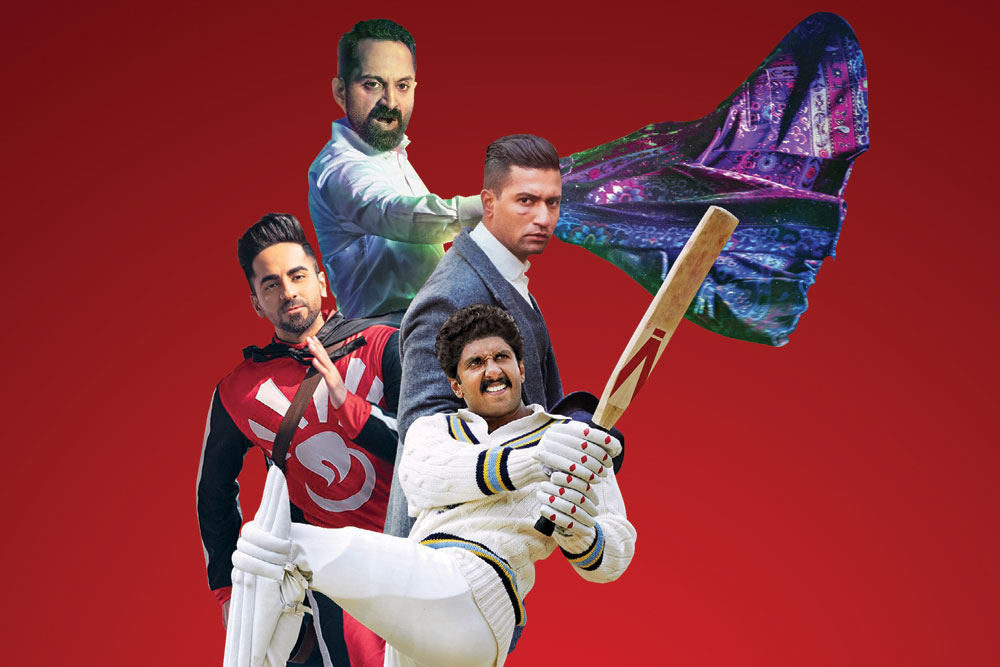 Inspired by the life of a national level kabbadi player, Panga is a sport biopic to watch out for. In Tanu Weds Manu Returns (2015), Kangana Ranaut essayed the role of a hockey player; she will now be a kabbadi player who fights personal and professional challenges to chase her dream.

Imtiaz Ali, known for films such as Love Aaj Kal (2009), Rockstar (2011) and Highway (2014), has shown us many facets of love. This film is his take on modern love and apparently bares open the lives of a generation that are more in love with themselves than anyone else.

After playing a balding man in Bala (2019) and a man who embodies the character of a woman in Dream Girl (2019), Ayushmann Khurrana returns with a sequel with a twist. The actor, who has always picked stories that defy the norm, is expected to break the usual Bollywood stereotypes surrounding gay love stories.

After the critically acclaimed Article 15 (2019) and Mulk (2018), in Thappad Anubhav Sinha brings us the story of a woman trapped in an abusive marriage. The film juxtaposes the main story with several smaller subplots where women fight against abuse.

The coming together of the Ustad Hotel director and Malayalam cinema’s present favourite actor Fahadh Faasil, Trance is one of the most anticipated Malayalam films of next year. Rasheed returns to direction after seven years with a psychological thriller that has Faasil playing a pastor for the first time.

Irrfan Khan returns after a long break with Angrezi Medium, the second film in the Hindi Medium franchise. The film mocks India’s evergrowing obsession with English and how careers and
success often depend on it.

This film is about India’s cricket World Cup victory in 1983, with Ranveer Singh playing the team captain.

Director Kabir Khan hopes to immortalise India’s incredible World Cup victory against West Indies, which was playing its third consecutive World Cup final. This film aims to capture not only the thrills of the game, but also the personal stories of the players.

Expectations are high of Singh, who plays Kapil Dev.

We will see Alia Bhatt and Ranbir Kapoor coming together for the first time on the big screen in the first part of this trilogy. Kapoor essays the role of a modern-day Shiva who takes off on a journey to seek himself and his true love. It’s the most expensive film of 2020 and expectations are high.

The first look of Thalaivi with Kangana Ranaut playing the role of former Tamil Nadu Chief Minister J Jayalalithaa raised eyebrows and questions. While the movie is said to focus more on her life as a Tamil cinema superstar, and not as a politician, audiences are going to be unsparing in their criticism.

For those who grew up watching cinema of the ’80s and ’90s, Mahesh Bhatt was among the most iconic directors. Nearly three decades after his film Sadak (1991), with daughter Pooja Bhatt, he returns with Sadak 2, starring his other daughter Alia Bhatt. The story apparently takes off where Sadak (1991) ends and is expected to put forth a strong message against fake godmen in this county.

Yet another period drama from the Baahubali director, SS Rajamouli’s RRR will tell the stories of two freedom fighters Alluri Seetharama Raju and Komaram Bheem. While their fight for the country is documented in texts, Rajamouli will tell of their pre-Independence lives. The scale of the film is expected to be bigger than anything we have seen to date from Tamil cinema. This will be Alia Bhatt’s first bilingual film, other actors include NT Rama Rao and Ajay Devgn.

Bhansali steps away from his beautiful world of kings and queens to delve into the life of Gangubai Kathiawadi who was the bosswoman of Kamathipura. On the one hand, she was known to peddle drugs, money and murders for a living; on the other, she helped young girls forced into prostitution. Alia Bhatt plays the title role here.

Shootjit Sircar, best known for relationship dramas, such as Piku (2015) and Vicky Donor (2012), moves to a biopic this time. Udham Singh was a revolutionary who assassinated Michael O’ Dwyer in London in 1940. While he has been all but forgotten by the pages of history, this movie, with Vicky Kaushal in the title role, aims to resurrect him.

Aamir Khan attempts to pull off the Indian version of Forrest Gump (1994). Tom Hanks’ Forrest, his personality and his idiosyncrasies have become the stuff of legend. Can Aamir Khan further this legacy?

Directed by Patty Jenkins, in this sequel, actor Gal Gadot personifies a character who is dealing with a cheetah as her arch nemesis.

After becoming one of the most talked about horror films in Hollywood, director John Krasinski returns with the second film in the series. Here we will see a family dealing with a post-apocalyptic world and fighting aliens that are attracted to a lot more than just sound.

Director Greta Gerwig’s much feted Ladybird brought her into the limelight. In this film, Barbie is thrown out of her world for being ‘imperfect’ and the film is about how she deals with misconstrued ideas of beauty.

Directed by Nicolas Pesce, this is the story about a young mother who murders her own family in a house cursed by ghosts. Adapted from the Japanese film Ju-On: The Grudge (2003), this is the most keenly anticipated horror film.

Tom Cruise is back in uniform more than 30 years since we first fell in love with his Maverick. In this film directed by Joseph Kosinski, he’s one of America’s top aviators and will lead a mission that has him training the best in order to protect their country.