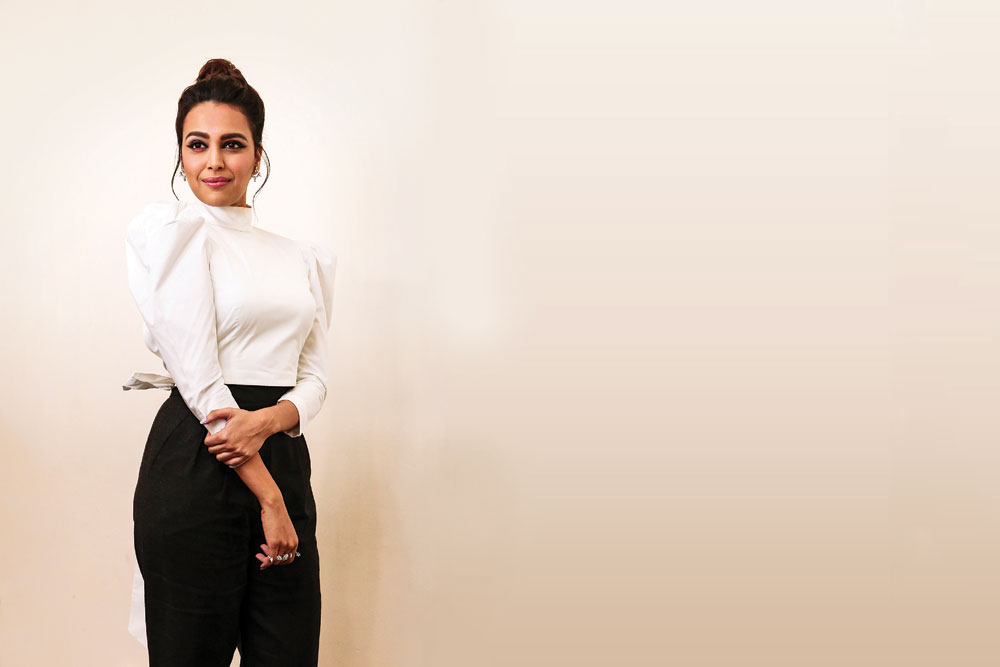 
ELEVEN YEARS AGO when Swara Bhasker walked into the Hindi film industry as a rank outsider, her only dream was to make it as an actor, on her own terms. She cared little about the length or the glamour or the supporting nature of the roles that were offered to her in the initial years of her career. She simply performed with utmost integrity and grit. “I was almost about to leave Mumbai, when Tanu Weds Manu Returns came my way. And everything changed,” she’d said to me in an interview in 2016. Today, more than a decade after she entered cinema, we see a woman who is a lot more than the sum of all the parts she has played in cinema. Vociferous, unabashed and undeterred by political correctness, Bhasker is among those handful of actors whose opinions often get the better of her.

Speaking from her home in New Delhi where she’s spent much of the lockdown, Bhasker is currently basking in the light of two web shows, Flesh (ErosNow) and Rasbhari (Amazon Prime Video), that she’s headlined, which released within a month of each other. She plays a teacher with a split personality disorder in one and a cop who fights against human trafficking in Flesh.

The shows have received muted acclaim, but for her it’s work that’s available at a time when the future of cinema on the big screen is ambiguous. “We are living in a time where everything seems a bit uncertain. Thank god for OTT platforms that really keep the ball rolling and hope alive, not just for actors but for everyone who is responsible for the making of a film or a show. You feel like, even though it may be a while before theatres reopen, there’s space for us to keep creating. We don’t have to stop, we just have to keep working. Despite all the noise and controversy around Rasbhari, my performance has been praised. And similarly for Flesh. It’s validation each of us could do with right now, because everyone’s feeling a bit anxious about getting back to work full time,” she says.

Bhasker has spent the last few months rescuing stray animals, contributing towards relief work for migrant labourers in Delhi, completing a chapter in a book that isn’t about Bollywood and taking baby steps towards turning producer for a feature film that she’s written herself. She assures us that it wasn’t about being overproductive during the lockdown, as much as it was about continuing to feel connected with the reason she became an artist. “I think at this point both personal and professional growth has been extremely important and many of us have been growing and discovering things about ourselves we otherwise wouldn’t have. The pandemic has almost pushed us against the wall and we strive to survive. I feel like I’ve been on an overdrive trying to juggle multiple things, but I’m grateful for that because it’s given me the chance to reconnect with family and made me really count my blessings which we as humans would often take for granted in our everyday rut.”


Despite the fact that she hasn’t had a feature film release since her biggest hit Veere Di Wedding in 2018, few would say that Bhasker has been missing from action. Her Twitter handle provides a window into her world as she writes on the importance of mental health, parliamentary democracy and due processes. She’s consistently been in the news for taking her own stance on the many political and social upheavals India has been facing. Among the few actors who fearlessly stand up for what they believe in, Bhasker realises that her career as an actor has also parallelly built her image as an activist. “Well, every time I’ve spoken against an issue, it’s been to protect our basic right to opinion and freedom to live life on our own terms. Be it the beef lynching or the Kathua rape case or speaking up against the implementation of CAA and NRC, I only speak from a place of conviction because for me these are very serious issues, and I still want to live in a world where democracy is not being butchered to death,” she adds.

Bhasker has always vouched for the fact that good talent can thrive within the industry, and her own struggle to make it without a godfather is testimony to the same. However, for her, the nepotism debate is a shallow one at the moment. “I think it’s not fair to name one or two people for nepotism. The audience and the media is as much responsible for it. The star system is not something that Karan Johar has invented. At best he has learnt to use it to his advantage. I find it a very shallow understanding of the industry and its economic structures to just say that star kids are favoured. If you do an analysis of the success rate of outsiders, it is more than that of star kids. There is a whole list of star kids who did not make it and a large number of outsiders who did.

Yes, there are many things that are problematic in the industry, but the problem isn’t originating with one or two people and this needs to be understood. If my film is a superhit tomorrow, Karan will cast me and that’s just the economics of it because this is a business and everyone needs to survive.”

Unlike most of her peers who stand back and ride the popular wave, in an attempt to protect their celebrity, Bhasker chooses to do the exact opposite. It’s taken a toll on her professionally, but it’s a path she has chosen. “After Veere Di Wedding, in an ideal trajectory I should have been flooded with more offers. That film made 100 crores and it was my most popular work. But what happened? I lost a few endorsements that were on the brink of being signed or renewed after I campaigned for six candidates from the AamAadmi Party in the last general elections. Another brand terminated my contract and the termination letter said it was because of my participation in the anti-CAA-NRC protests. There are multiple people who have told me that producers have not backed the idea of casting me because in their eyes I’m too controversial. It wasn’t easy for me, but so be it. It’s what I have chosen and I won’t stand down just to protect myself or my work. What I am speaking for is much larger than that. It’s about standing up against a totalitarian regime and protecting our basic rights. If we are heading towards being a society where we are punishing people for having opinions, then nobody is going to be safe,” she adds.

Her army of online haters is growing every day. She isn’t too popular for her opinions and is at the receiving end of endless rape and death threats. As a liberal, she’s learnt to be unfazed by incessant trolling. “Actors are supposed to be liked, right? No actor is keen on cultivating a constituency that hates you diligently. But in my case the constituency that hates me also ends up only popularising my name, bringing me an identity, making me known for what I believe in. They are adding to the whole persona. These days I’m just like, ‘Go for it’,” she says.

SHE REALISES THAT at times her activism speaks more than her work as an actor and she’s okay with it. She feels like her art gives her the strength to stand up for what she believes in. In the last few years her definition of success has shifted from a personal one to one that affects society at large. “We are forgetting that we are from a country of artists like Majrooh Sultanpuri who was in jail for over a year for speaking against the then Prime Minister Jawaharlal Nehru. Muhammad Ali was banned from boxing for three years at the top of his career because he was against the Vietnam War. He never regained his lost form. So I believe everyone who is standing up today is creating history one way or another. If I have to make sacrifices for it, I just see it as collateral damage now,” she says.

She’s been a risktaker from the very beginning, and it shows. Her first film Niyati never saw the light of the day, but she continued to chase her dream to be an actor. She played the heroine’s friend in two of her most popular films, Tanu Weds Manu (2011) and Raanjhanaa (2013), and still stood out as an ace performer. In 2015, when she gave her first solo hit Nil Battey Sannata, many had advised her against playing the mother of a teenager. But she did—and successfully so. She was trolled for a masturbation scene in Veere Di Wedding, but she held her own. She even called out one of Bollywood’s biggest filmmakers Sanjay Leela Bhansali in an open letter for making Padmaavat (2018) which she thought propagated archaic traditions that disempowers women. She clearly gains strength from her steadily growing public persona as an activist and pours it all into her work. In her forthcoming Netflix show Bhaag Beanie Bhaag she plays a politically incorrect struggling standup comic, and in her next short film Sheer Qorma she plays a woman in love with a woman.

Bhasker’s stories and the characters she plays have never really toed the line and notwithstanding the number of films she does, what’s definite is that she’s going to continue standing up for what she believes is right. “I’m the classic example of the outsider who made it and I’m not scared of losing it all. It’s not just me. Journalists, students, social workers are all suffering today, many of them behind bars for speaking up. Be it through my work or otherwise I’m not going down without a fight—that’s certain,” she adds.