Rajiv Menon: Between Beat and Rhythm

Music becomes a communitarian experience in Rajiv Menon’s new film. He talks about the art of breaking barriers in a conversation with Nandhu Sundaram 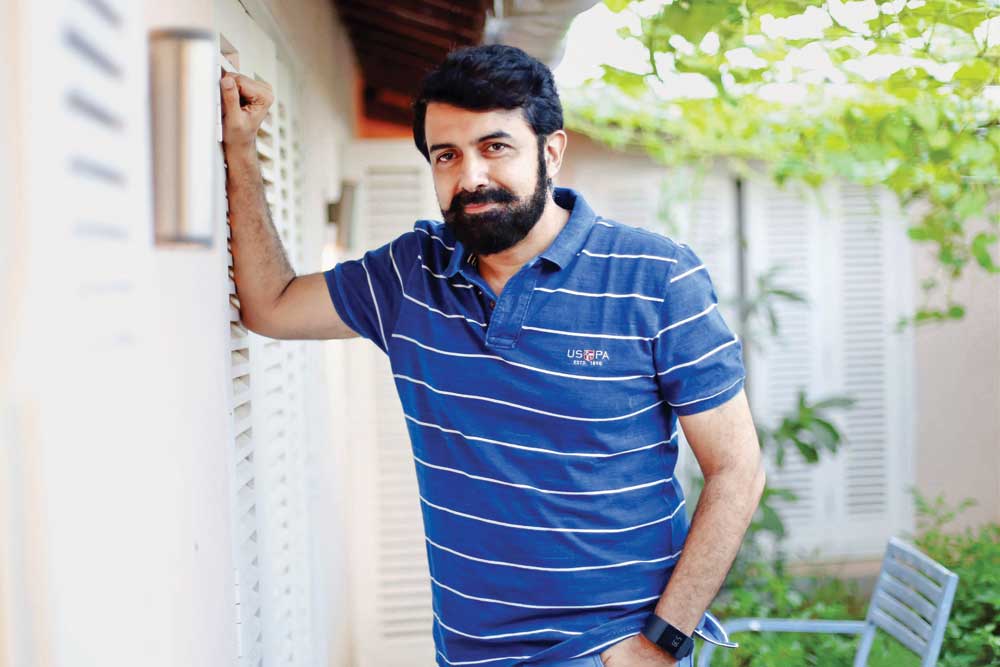 RAJIV MENON IS TIRED. His voice sounds like it’s coming from the bottom of a well. He has been promoting his latest and third movie non-stop. The first time we speak, he is just stepping out of the offices of a leading Tamil channel, in Chennai. We reschedule. The media has been hounding him; he has done four interviews that day already.

However, none of this deters the Tamil filmmaker or his enthusiasm, as he talks about Sarvam Thaala Mayam, his first movie in nearly two decades. His last movie Kandukondain Kandukondain (2000) based on Jane Austen’s Sense and Sensibility with a stellar cast of Mammootty, Ajith Kumar, Tabu and Aishwarya Rai won both critical acclaim and public appreciation. While he has directed only three movies, he is also the cinematographer of visual splendours such as Mani Ratnam’s Bombay (1995) and Guru (2007).

With Sarvam Thaala Mayam Menon, who has also written the film, has turned producer for the first time under the banner of Mindscreen Cinemas. Sarvam Thaala Mayam (‘The Magic of Beats’) tells the story of a Dalit mridangam-player (named Peter Johnson played by GV Prakash Kumar) who breaks barriers and emerges triumphant. “This is the generation where bridges can be crossed. This is the generation which has the self-belief to scale walls,” the 55-year-old filmmaker says.

The AR Rahman-musical takes the hot-button class and caste issues in Carnatic music, and creates a movie that goes beyond polemics to tell a human story. It is a movie where context elevates all, and where hope can be found in the ethos of Carnatic music itself. Menon denies that the film is caste-based. “It just so happens that the boy comes from a mridangam maker’s family, who happen to be Dalit. The word ‘caste’ is not used in the film at all. All of us know that representation from certain communities is very poor in certain art forms. What I find peculiar is that the people making the instrument don’t play it,” he says.

The idea was triggered when Menon spent three months making a documentary on the mridangam—a Carnatic music instrument—and its leading players. “I interviewed the mridangam maker Umayalpuram K Sivaraman and that gave me the dramatic seed of my idea,” he says. “I pretty much know how conversations happen in Umayalpuram’s life. Brahminical lingo is something I understand…Writing in Tamil is different— you need a kind of a punch. It’s like a duel with dialogues. It has to sound contemporary. Writing is truly interesting and challenging,” he says.

The lead actor, 31-year-old GV Prakash Kumar, who is also Rahman’s nephew, is better known in Tamil Nadu for his music than his acting. He is a film score and soundtrack composer, and singer, with more than 50 films to his credit. Was he the first choice for the role of percussionist Peter, I ask? “I did try to meet other people also. Somehow, GV’s physical appearance is of a guy who looks like he is 20-25 years old. I wanted to make it as a musical. In the West, people normally perform their songs. I wanted that quality. And, that is possible only if you have a musician who is ready to act and invest his time,” he says.

Have upper castes appropriated the arts, I ask. “I don’t think there is an official embargo in that sense. There is no board that says, ‘You are not allowed’. Maybe it was there in the 1930s, but not anymore. Somebody comes in with a lot of talent and bangs hard, he or she will be able to break through. It happens that people misconstrue family background for caste. I don’t think these two things are connected. It is not natural for youngsters to feel strongly about classical music. So it is a form that is ageing and new listeners are required,” he says.

“Music is in my genes. Music can be used to tell different stories with the same set of visuals,” says Rajiv Menon

Menon might have chosen a serious topic, but his treatment of it is fresh and accessible. He says, “My film is joyous and contemplative. Normally socially conscious films end up in a tragic death and hurt and pain and suffering. But my stories are about hope, how music brings communities closer.”

Menon has a knack for not only capturing the right face for the right role, but also for seeping his scenes in atmosphere and ambience, an art he mastered as a cinematographer. “Menon can capture landscapes with beauty and charm— makes them look almost like a painting,” says actor Vinodhini Vaidyanathan who played the role of a fisherwoman in Kadal (2013). Film historian Theodore Baskaran adds, “He started as a cinematographer and therefore his films are very visual. I would compare him to Govind Nihalani, AK Bir or Balu Mahendra. All these men were able to convert their ideas into images with great ease.”

BUT RIGHT NOW, Menon is helming a movie that plays a crucial role in his career. “Feature films are not about producing alone, it is also about reaching the market. That is a new experience. You want to do a film with the greatest possible quality. You have to convince a lot of people for a movie to reach theatres, no? It has to be packaged in a way that it reaches the audience. Then it is their reaction that matters,” he says.

He need not worry too much, as Sarvam Thaala Mayam has opened to an enthusiastic reception in theatres across the country. It was also screened as part of the official selection at the 31st Tokyo International Film Festival late last year, to a “very, very positive” reception. “On Twitter, there were many Japanese people tweeting about it…I felt very happy that it has reached them. They understood the social dynamics, the debate on meritocracy and the nuances of the music,” he adds.

Menon has worked with music maestro AR Rahman since the first movie he directed, Minsaara Kanavu (1997). Over the decades, they’ve evolved from colleagues to friends to near family; with music forming the constant bond. It is a relationship based on mutual respect and trust. Menon says, “I am able to tell him whatever I feel like.”

Menon illustrates the relationship with an example. “[Initially] I had not fixed the name as Sarvam Thaala Mayam. That is when Rahman was asking for something stronger. I thought wider and I came up with Sarvam Thaala Mayam and he said it is better. When I have something like a tune, I will go and tell him that I have a tune in my head. He says ‘go ahead and sing it’, and he actually accepts your song… He is not insecure. If the song works, it works,” he says, adding, “He sees it as teamwork, not me infringing upon his work. I don’t see any wrong when he says that the title doesn’t work. So that kind of collaboration is like between friends and that is a liberty that others may not have, but I have it.” Menon has composed the song ‘Varalaama’ in Sarvam Thaala Mayam.

It is a collaboration that has worked to his benefit, as music forms the spine of his films. Bhaskaran says, “Menon is not able to move away from the song-and- dance routine. That is very much part of his process. Very often, his songs are integrated well into the narration. He brings in motifs that run through the film. In Kandukondain Kandukondain, it is water. That is like a thread running through a gold chain.”

During our interview, we talk more about music than movies. “The film is, in a sense, a microscopic dive into Carnatic music. First, you are talking about music and rhythm, then you are going inside how a rhythm instrument is made and the people who make it. And you are really, really diving deep into a certain culture and peculiarities in it,” he says.

When I ask him the obvious question, about the 19-year gap in his direction, he explains that projects did get delayed, despite his commitment. He turns philosophical, “In Mahabharata or Ramayana, people go on vanavaas. What the epics are telling you is that you should have self-belief, even if you are Ram. You have to go out for 14 years or even longer than that. There were moments of great despair. It was a struggle, but I think I had the chance to survive,” he says.

Was he vexed during his time away from direction? “I have seen death of my father, and a lot of trouble in my younger days. I feel that impediments are given to those who have the ability to tackle it, you know. It is worse when people call your film mediocre. It’s better that you don’t work at all,” he says.

Menon’s mother is the eminent singer Kalyani Menon who fostered his interest in music. “Music is in my genes,” he says. “Some people are good visually, others with music. [Hong Kong-based filmmaker] Wong Kar-wai uses a soundtrack of an old Spanish song to illustrate loneliness and makes the tone of his movies different. If you put a contemporary song, [the meaning] changes. Music can be used to tell different stories with the same set of visuals,” he says.

Menon has tried his hand at acting too, but just once—in a Malayalam movie. “My performance was deadly, I died in the film. It was a wooden performance in those few shots,” he says with a chuckle.