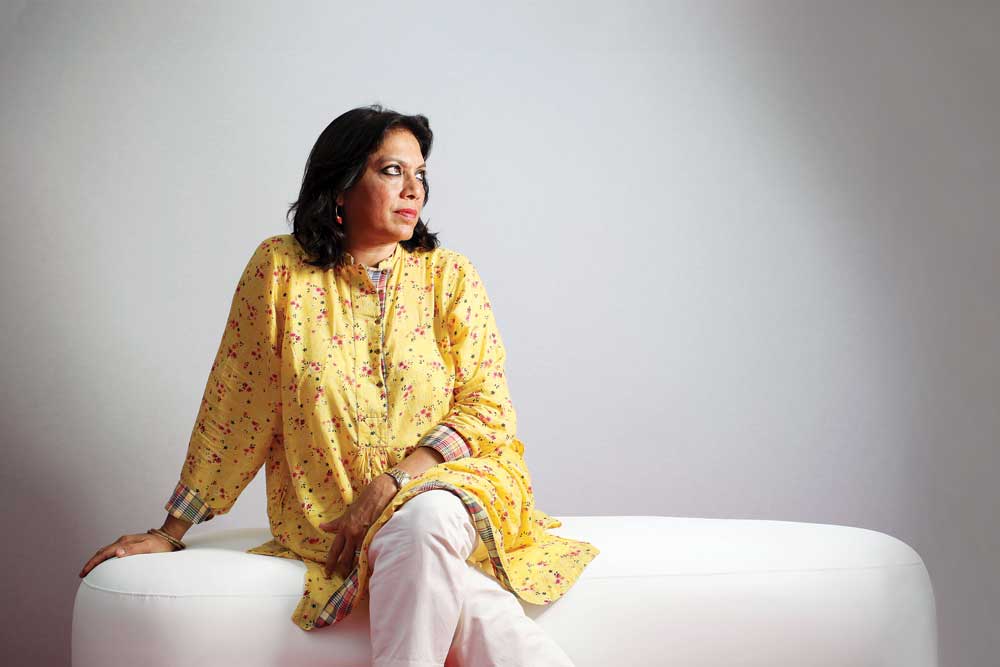 ‘IRRESISTIBLE’ IS ONE of those adjectives that critics should handle with utmost care,’ reads the first paragraph of the review of Mira Nair’s Queen of Katwe by the New York Times’ chief film critic of over a decade, AO Scott. ‘But if there is anyone out there capable of remaining unmoved by this true-life triumph-of-the-underdog sports story, I don’t think I want to meet that person.’

It’s been a month since the tenth feature-length live action film of arguably the most accomplished and feted international director of Indian origin, Mira Nair, premiered at the Toronto International Film Festival, where the festival’s artistic director Cameron Bailey spoke of how the world has been catching up with Nair’s stories. Bailey proclaimed Nair’s time is ‘now’, and ever since, the accolades for both her and her new film haven’t stopped.

This four-quadrant inspirational Disney biopic of an underdog chess prodigy, Phiona Mutesi, from the slums of Kampala, Queen of Katwe may not be the standout movie of Nair’s remarkable career that counts, among its many highlights, the Oscar-nominated Salaam Bombay! and the screen adaptation of Jhumpa Lahiri’s The Namesake. And yet, it is just as important as the other stories she has chosen to champion through her distinct cinéma vérité style of filmmaking.

The American film industry is still reeling from the embarrassment and backlash of the #OscarsSoWhite hashtag, where all 20 acting nominees at this year’s Academy Awards were White, for only the second time in a row, since 1998. It is also the year where US Republican Presidential nominee Donald Trump’s xenophobic rhetoric has riled passions.

At a time when fractures along class and race are widening, here’s a film by the most successful of the ‘Big Six’ American film studios, featuring an all-Black cast led by a 16-year-old debutant non-professional actress from Uganda, set almost entirely in Africa, and directed by a woman filmmaker of Indian origin. In any other year, a film like this would have been an anomaly, but in 2016, when the world seems to be Benjamin Buttoning itself into a Neolithic version of itself, the fact that Queen of Katwe was made at all is akin to a miracle. But that’s exactly what attracted Nair to the story in the first place. “If you see Africa on any screen, even within Africa or without Africa, it is always to do with dictatorship or bestiality or child soldiers and violence; it has nothing to do with the kind of everyday life in Africa,” she says, over the telephone, just before the film’s European premiere at the BFI London Film Festival.

“I think it’s so important to break the ignorance, the myopia, and the sort of terrible tropes and stereotypes that exist about other places in the world today. Even in India, there is massive racism against African students. There is so much importance given to the colour of our skin, and there’s caste prejudice that we’ve been carrying on for years, that the Government stokes every moment, you know. A film like this hopefully makes you realise that the Nigerian student down the street is not a hustler or whatever the world may tell you that he or she is. That’s important to know right now.”

Lending a voice to those who have little say has always been one of the themes of Nair’s movies. From tackling the pandemic of child abuse in Monsoon Wedding to the rising Islamobhobia in her last film, The Reluctant Fundamentalist, she takes pride in giving a platform to the marginalised and the misfits, while ensuring that their portrayal is not bleak but spirited. Nair calls it the “life-ist” attitude that she has seen as the fundamental component of the human condition, irrespective of where she sets her film.

“This embracing of life fully… the emphasis on how much you can create with your life, regardless of how little you may have, has always inspired me,” Nair says. “The struggle to just achieve who you are by people considered outside of society, is a tale I have tried to tell since Salaam Bombay! because there’s dignity and joy that you never see or hear of.”

When a Disney executive with Ugandan roots, Tendo Nagenda, brought her a profile of Mutesi snipped out of a sports magazine, Nair knew this was a story she needed to tell. Mutesi’s story took place barely 15 minutes away from Nair’s house in Kampala, a city she has called home for the last two decades (she met and married her husband Mahmood Mamdani, a professor at Columbia University, New York, in Kampala). But it was the opportunity to authentically portray a people she has come to love that appealed to her.

So if Queen of Katwe ticks the sports film box, it also shines a light at the vivacity and compassion of the Ugandan community, beyond just the colours of its streets, the hiphop music or the vibrant camerawork (by 12 Years a Slave cinematographer Sean Bobbitt). The story of Phiona, she points out, is not just the story of how “genius can be found everywhere” but that of the entire community that lived her dream with her, and for her, “because that is how life is lived in Kampala.”

“IT’S NOT AN individualistic life or a one-person show. It takes a mentor like Robert Katende, a mother like Harriet Mutesi, it takes a street, a family. It takes a village to make a genius. It’s this prismatic view that I find interesting. I also think the world is ready to see on screen what the world is off screen—the multiplicities, the diversity, the inclusivity, and the humanity, which I love to film. Because I am certainly never going to make the reductive formula sports film that is expected of me,” she says with a laugh.

Having grown up in Rourkela and Bhubaneswar, and having studied at Delhi University and Harvard University, before finally finding her calling in Hollywood; Nair now shuttles between her three homes in New York, New Delhi and Kampala. In that respect, she is a global citizen, if ever there was one, so presenting an all-encompassing world in every story she illustrates on screen is not just important to her, but obligatory in a way.

“If you are truthful and all-encompassing, whether you are watching Uganda in Queen of Katwe, or Monsoon Wedding with the Punjabiyat of it, or the streets of Bombay in Salaam Bombay!, even if that world is far away from your reality, you will eventually see yourself in that truth too. You relate because you either know the feelings I have tried to portray, or you could know them.”

It was hence critical to Nair to cast actors from the streets that she portrays, if Queen of Katwe was to work. Madina Nalwanga, who plays the lead role of Phiona, grew up not far from Katwe, in the streets of Kibuli, where she sold corn for a living, and was found through a dancing troupe she was part of. All the other children were non-professional actors too, a strategy that helped her put together a magical cast for her debut film Salaam Bombay! as well.

“I had no interest in taking an upperclass child and teaching him or her how to bathe with half an inch of water,” she says. “Children are like the maps of life. So my interest is actually being educated by a child, to show us the world that he or she is coming from.” So when we found the kids, I distilled the roles according to their strength and their fun, so even the audience would feel a sense of familiarity on seeing them.”

“Moreover,” she says, “there’s a real alchemy that happens when you put together a kid from reality opposite a legendary actor like David Oyelowo (who plays Phiona’s coach Katende) or Lupita Amondi Nyong’o (who plays Phiona’s mother Harriet), or Naseeruddin Shah in Salaam Bombay!—because when you have a pure non-actor and a pure actor, they both have to meet at a point of purity, you know.”

It is this commitment to break out of the trappings of traditional Disney fare that gives Queen of Katwe the Mira Nair stamp, which the director gives full credit to the studio for not trying to “sanitise”. Because if the film plays out the conventional uplifting sports film tropes, like the sports metaphors that Katende uses to explain life itself (“Find your safe squares”), there are enough unpredictable and unexpected moments of genuine emotion derived from the “barbarity and brutality of living in the slums”, as Nair says.

The filmmaker cites the example of a scene where Phiona, on beating a boy at chess, asks if she was allowed to win by him, as an instance of the “familiar female diffidence” that is still rampant among so many women. “These are not unique attributes, you know,” she explains, “These things happen to all of us, and that makes us think and believe that we are pretty much the same people, no matter where we are. I don’t like sugar coating this, but yes, I do like to tell it all in a way that you have mazaa (fun) also. Because if you feel the mazaa, you feel the pain too.”

“That is how I make movies—I don’t want a harangue; I don’t want to be lectured to. So I have shaped the film like a human heart and the rhythm of it is like an accordion. It expands your heart with laughter, because the kids would do that to me with their finger snapping and their sounds that were so full of sassiness; and in the next moment, you’d see the reality of eating, where you are fighting for a bowl of porridge.”

A turning point in the movie, for Phiona, comes when a child she’s playing with explains to her why chess matters to her. “In chess, the small one can become the big one,” she says, referring to the chess rule wherein a pawn can become a queen if it makes it across the board to the other side. Phiona makes this her motto, deriving courage from it, and giving it her own moniker that ties back with the movie’s title: ‘queening’.

Queening can aptly be used as a term to describe the swagger of the women in the movie. Because Queen of Katwe isn’t just an inspirational sports film that can empower the young Phionas of the world to chase their dreams; for Nair, it is also a feminist movie inspired by and dedicated to the Harriets of the world, because without their pluck and persistence, there would be no Phionas.

Nair says, “I don’t ever want to make a female character who gives up on life. Even the real Harriet is a formidable ‘Mother Courage’, someone who became a teenage mother but refused to let her children follow her path, as best as she could. She struggled so deeply in her youth but resolved that she will stand up for her children.”

“That’s the tenacity that Phiona has inherited too. She’s lethal and resolute in chess, and that comes from her mother’s life, struggles and courage. And these are the women I like depicting on screen: who are as complicated as we all are, and inspiring in their own ways.”

In three decades of filmmaking, Nair’s protagonists have embraced all the curve balls that life has thrown at them. And at the film school she has started in Kampala, Maisha Film Lab, she galvanises her students with the motto, ‘If we don’t tell our stories, no one else will.’ Clearly, Nair’s endgame has been ‘queening’ all along.