View from the Yellow River 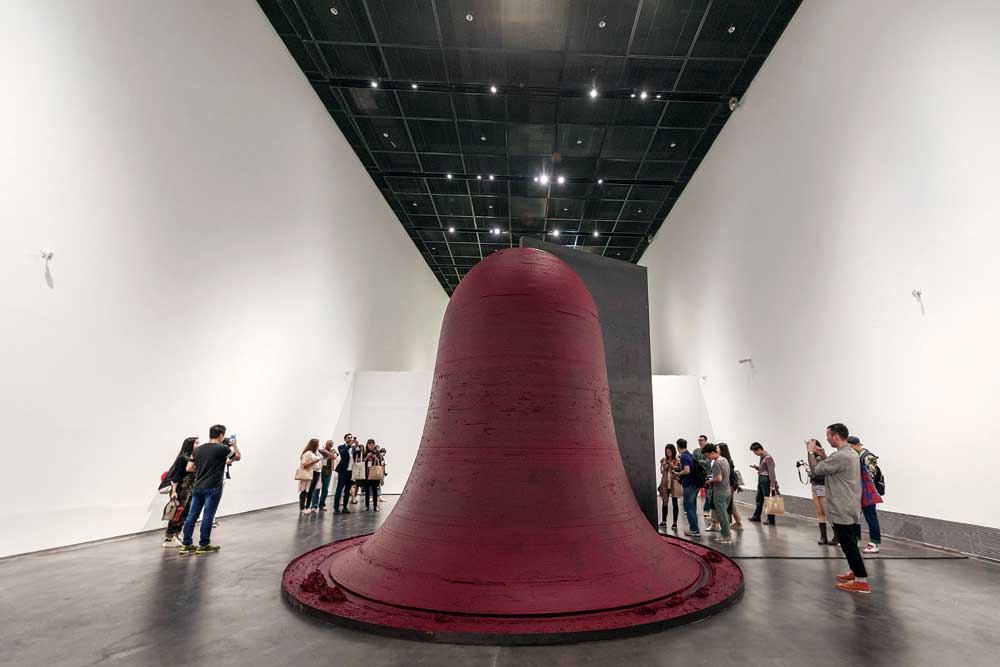 THE DRIVE FROM the airport to Yinchuan city is both delightful and enlightening. I was picked up by Chen and Sophia, two representatives from Museum of Contemporary Art (MOCA), Yinchuan, in northwest China. Sophia explained to me the significance of the first Yinchuan Biennale that opened on 9 September. The curator of the inaugural edition, the well-known contemporary Indian artist Bose Krishnamachari, had chosen an appropriate title: For an Image, Faster Than Light. As I was wondering what could be in store under that umbrella which was bringing together 73 artists from 34 countries, we went across a very long bridge—nearly 20 km long— without a river or lake underneath. Out of curiosity, I enquired the reason behind this and the response was revealing. The people and the government of China have been firm about protecting agricultural land. Therefore, they decided to build a road link that would be overground, leaving 1,600 sq km of agricultural land untouched: an investment for the future. The image of this idea felt faster than light, vindicating the relevance of the Yinchuan Biennale theme.

As we approached the scenically beautiful, newly constructed MOCA and the International Artists’ Village, Robert Montgomery’s work across a wooden bridge greeted us. Linking earth, water and sky, his poetic art hung across the water body like a huge banner, declaring, ‘The Birds Return with Unvideotaped Memories of the Mountains. The sea has no name for China or even for America. The sea has no name even for itself.’ I later discovered that it was Montgomery’s tribute to late Scottish poet Paul Reekie, the lost genius who committed suicide at the age of 48.

The Yinchuan Biennale is located along the banks of the Yellow River on one side and the Mingcui Lake on the other, and is surrounded by organic paddy fields. From a distance, one can see the blue peaks of the Helan mountain. Helan is a Mongolian word for ‘a strong horse’. Little wonder that there are three bronze horses in different postures standing tall in front of the MOCA.

The superstar of this Biennale, British artist Anish Kapoor’s work, is a huge bell. In this slow-moving, untitled mechanical sculpture, a black rectangular slab is the rotating template that shaves the blood-red wax into the shape of a bell. I was reminded of André Tarkovsky’s magnum opus Andrei Rublev.

The fragrance of times and impinging creativity haunted viewers in most of the art spaces, seven in all. It was outside, beneath the gallery space in the artists’ village that sculptor Valsan Koorma Kolleri used his trademark style to create a conversation with the landscape. As always, he used unconventional materials like soil, jute, bamboo and glue to create Earth Whispers. One of the structures in his installation, which also included two boats, was a swing that brought back memories of Onam celebrations in his home state, Kerala, which relates to a mythical belief about a foregone egalitarian order under Mahabali. Appropriately, Onam was only a few days away.

Jyothi Basu’s work was an unforgettable visual riot of images, at once constructing and deconstructing ideas and impressions. A subtle reminder that ‘breaking starts from within’. Breaking can be distressing and regressive. It could also be a betrayal. But sometimes it can be for the better reorganisation of a dying culture. It all depends on how we intervene and direct the process.

Riyas Komu has always worked with great audacity driven by a distinct insight. I remember his huge installation at the Centre Pompidou in Paris that showcased the footballing legs of Maradona, Pele, Messi, Ronaldo, IM Vijayan, Lev Yashin and Johan Cruyff, a line-up in used wood playing upon the imagination of viewers and their view of their favourite players.

One of my favourite works by Riyas is On International Workers’ Day, Gandhi from Kochi, once again a throwback to what we conveniently forget. Similarly, his work at Yinchuan, Ningal Enne Communistakki (‘You Made Me a Communist)’, was a collection of images of those who fought for social change across the world. The work depicts different streams of struggles and propaganda that propelled them. By his own admission, it needs constant rework and improvement due to both philosophical and practical reasons.

Sudarshan Shetty, Benitha Perciyal, Dia Mehta, Kartik Sood, Sushanta Kumar Maharana and Sonia Mehra Chawla were the other Indian artists presenting their works here. Conspicuous by his absence was Ai Weiwei. This was disappointing. The host country China was represented by 11 artists. On the Indian side, nine artists, conference convenor and editor of publications Manoj Nair, and curator Bose made it 11, a significant number according to Sufi tradition. The Naqshbandi Sufi way sets out 11 veils or principles for practice. Something that was marked in the 11 video installations of an Australian artist titled At the Speed of Light, where he posits the question: what if we could catch the speed of light.

It was even more significant for Yinchuan because Ningxia province, of which it is the capital, has a population that’s around 40 per cent Muslim, their lives and manners deeply influenced by Islamic culture, almost as if they have beckoned a mysticism from the mountains. They have a wonderful masjid—a Taj Mahal made in China—which we were not able to visit (imagine visiting Agra and returning without seeing the Taj). But then, seeing and understanding nearly 110 pieces of contemporary art and attending a two-day conference doesn’t leave much time for sightseeing.

Among the must-sees were Yoko Ono’s Ex-It, 100 coffins with fruit trees growing out of it; Mohammed Kazem’s wooden letters strewn randomly in the lake; Mary Ellen Carroll’s Look Far Away, a reference to US President Kennedy and his wife’s visit to China that was never to be; and Brook Andrew and Lisa Reihana’s works on an installation of images hanging from the ceiling and the other a video, both reminders of cultural appropriation by colonisers in the Pacific Rim.

What stood out was the courage of two women—artistic director Suchen Hsieh and director Wenjin Liu—in envisioning a festival like this in a place as remote as Yinchuan. Like Bose, they believe that if China and India cooperate and collaborate in the world of art and culture, then together they could emerge as an unsurpassable soft power—an image faster than light. To borrow from one of the sessions of the conference, this is the best thing one can do with the gift of the rest of your life.