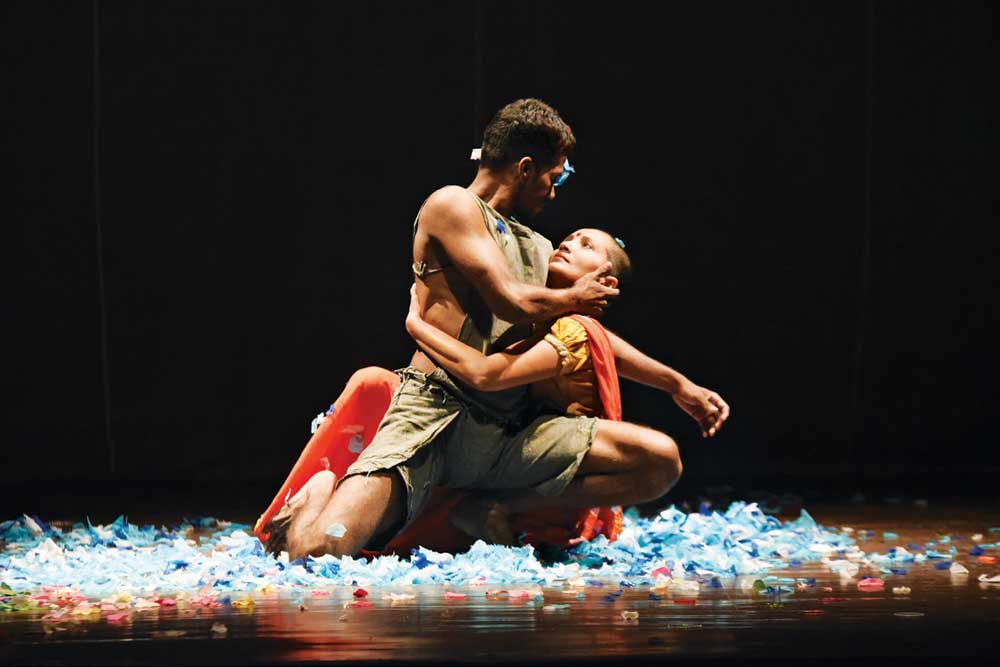 KARUPPU IS NOT just a piece of theatre, it’s an experience. A dance of light and darkness plays out on stage, with stories emerging out of the crevices between the two energies. It’s almost as if you are hurtling towards luminosity from a certain tenebrosity, and back, with amazing speed—there are scenes with pitch darkness and absolute silence; this blackness is suddenly pierced by the red glow of a lamp, and the silence invaded by the breathing of characters, the trickling of water and low murmurs. In that one hour, one lives through such vivid imagery, which shouts out to you, even though not one word has been spoken on stage. This non-verbal play, which was recently staged in Delhi as part of the 13th Mahindra Excellence in Theatre Awards and Festival (META), draws on the human relationship with darkness. It took home three awards, including best choreography, best costume design and a special mention for best female actor in a lead role (Ruchi Raveendran).

It is based on age-old Dravidian cultural rituals, depicting a universe that absorbs all imbalances like a black hole, with total annihilation setting the stage for rebirth. Karuppu also brings to life characters from Indian and Greek mythology and, in the process, shows the separation of prakriti from purusha.

The idea came to director Koumarane Valavane in 2013, when he realised there were no tragedies in Indian theatre, barring that of Karna. This is his first non- verbal production, one that allows the director to don the robes of a dramaturgist as well. “Karuppu means colour. However, in Tamil, it also means darkness. A lot of rituals are associated with dark energies and dark deities,” says Valavane, who is founder of the Puducherry-based troupe, Indianostrum Theatre. As he explored this theme further, he was introduced to a different belief system, in which darkness was considered powerful, almost divine. “And it was based on some very concrete events, such as diseases, invasion by enemy forces and natural disasters. These were things that one had no control over. Hence, people devised rituals to protect themselves,” he says. Valavane began to investigate some of these rituals which are still alive in parts of Tamil Nadu, such as the placing of black stones at the entrance to villages to ward off diseases. “In some ways, this made man more responsible. It was not like God was protecting you, rather you had to protect yourself,” he says. It also introduced him to some of the oldest Indian philosophies, in which there was no idea of God, only of energies—purusha and prakriti—that came together to create the universe. “All disorder stems from imbalance between the two, ultimately leading to destruction and rebirth. I was interested in exploring these through male and female characters,” says Valavane.

This progression is seen through characters such as Iphigenia, who was sacrificed by her father to win a war, Ophelia who committed suicide after being abandoned by Hamlet, Medea who killed her children in order to avenge her oppressive husband, Clytemnestra who murdered her husband, and Kali, who wants to kill the purusha energy itself, by stomping it. The play ends with the re-imagining of a new kind of harmony between the two energies, thus creating a fresh vision for a man-woman relationship.

Meanwhile, Karuppu, which has been shown at Rangasankara, Bengaluru, and Theatre du Soleil, Paris, among other places, has become extremely popular because of its contemporary retelling of age-old tales. “Maybe because it appeals to the subconscious. There is no clear narrative. People might not know Iphigenia or Ophelia, but they know these relationships. The imagery provokes them,” says Valavane. This dance drama was chosen for META from among 300-plus entries— including several non-verbal, physical pieces—by a selection committee, comprising theatre stalwarts such as Bharati Achrekar, Chandradasan, Swaroopa Ghosh, Vikram Phukan and Vivek Mansukhani. Mansukhani explains their choice, “What appealed to us was that in one hour, the production encapsulated five ancient, popular and poignant tales into a beautifully-knit and strong visual narrative, with the stories flowing seamlessly into one another. Also, the sheer physical skill and energy of the cast, the set design, which was simple yet magical, the uplifting soundtrack—all these elements came together very well.” Karuppu also highlights that it’s not just the classical arts that truly represent India, but also such cutting-edge theatre productions, which reimagine ancient tales in a new storytelling format.

IS IT A COINCIDENCE that many of plays selected by META this year, be it Shikhandi, Comfort Women or Item, are headlined by strong female characters? “It was not a conscious decision to shortlist women-centric plays. Rather, the selection of the top 10 plays happened organically and it represents a wide diversity of content and styles. There are productions in seven different languages, with the plays celebrating theatre practitioners, who are struggling to make ends meet, and yet are courageous enough to battle all odds by taking huge risks to produce new genres of theatre, which may or may not be commercial successes,” says Mansukhani.

And Indianostrum is a stark example of this. Founded seven years ago, after Valavane came back from Paris, the production company aims to expand the role of contemporary theatre by creating an audience for it and developing a space for that audience to view newer works.

The story behind the genesis of Indianostrum is, perhaps, as interesting as the productions that it stages. Valavane, a Franco-Indian, left for France at the age of 14. There, he studied theoretical physics and also created a cultural association, titled Centre Culturel de Luminy. After completing his studies, he founded a theatre company, Natya, and worked with the prestigious Theatre du Soleil, under the guidance of Ariane Mnouchkine (renowned French stage director). On returning to Pondicherry in 2006, he met several young people who wanted to act, but didn’t have any avenues, so he formed Indianostrum in 2007. It has also become a space for local art forms of Tamil Nadu, which are on the verge of extinction. These include the epic storytelling tradition of Therukoothu and the puppet theatre form of Katta bommalattam . Valavane has been working with artists, specialising in the latter, to create a unique collaborative performance. “All this stuff about ‘creating a platform’ sounds very political and pretentious. The basic idea is to have a permanent troupe and create productions,” he says. However, it has been a constant struggle to keep the efforts going, as there is no support for theatre either from the government or society at large. “The social situation for actors is terrible,” he says.

When was he first drawn to theatre, I ask, and he knits his brows in a frown. After a long silence, Valavane says, “It’s difficult for me to answer that. All creative people are born with a fire inside of them. It can either consume them or, if they know how to control it, infuse them with light.” He considers himself blessed to have been placed at that juncture, one on which many artists and teachers have already left an imprint of their legacy.