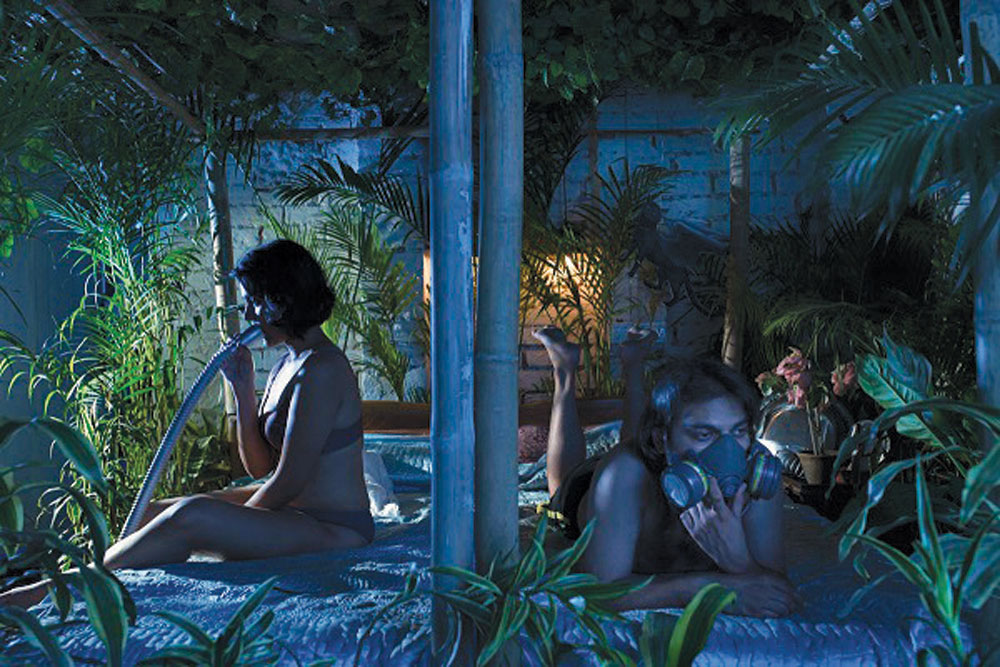 An elegy for ecology by Sharbendu De


ON March 6th, when the World Health Organization was still days away from declaring a pandemic, a major retrospective of artist Mehlli Gobhai opened in Mumbai. Barely two weeks later, the National Gallery of Modern Art had to close its doors. More than 200 artworks and archival objects now lie barricaded within its dark and silent confines.

Like many others in the art world, curators Nancy Adajania and Ranjit Hoskote made the decision to organise the show virtually. It wasn’t easy to convey “the surprises and discoveries curatorially designed into the exhibition architecture through a simulation”, says Hoskote. “That cannot stand in for the actual experience of visiting an exhibition, but it is better than missing out on the show completely.”

What you now see of the retrospective are installation views and close-ups of Gobhai’s oeuvre traversing 70 years, on your computer screen. What you don’t see is the behind-the-scenes collective endeavour of exhibition-making. What you don’t experience either are the spatial and sensory accoutrements that heighten the tenor.

Since the lockdown came into effect in India, galleries and museums have taken to exploring the limitlessness offered by the digital world given that the physical world has imposed upon us insuperable limits. If we can’t cross our thresholds to connect with art, art will come to our doorstep. How do we keep contact and engage with the community? That’s the question social media feeds and websites of creative spaces—peppered with artist talks, virtual walkthroughs, treasure hunts and quizzes—are trying to answer.

In India, most venues have in the past few years ramped up their online presence, either on their own channels or on the Google Arts and Culture platform. But this presence has always been a supplement to the natural existence, rather than a replacement.


“The focus now has almost entirely moved to our online offerings, engaging with our followers in a host of different ways. There were of course certain challenges in the initial days of the lockdown mostly to measure up to the experience of an actual visit to the museum,” says Vaidehi Savnal, Assistant Curator at Chhatrapati Shivaji Maharaj Vastu Sangrahalaya.

Some galleries have made their first strides in virtual exhibitions, not as representations of physical ones, but as immersive spectacles in their own right. Anushka Rajendran conceived Speculations on a New World Order for Delhi’s Shrine Empire Gallery in the early days of the lockdown. She considered the Covid-19 outbreak not in isolation, but at the confluence of ecological and environmental issues. “There’s a certain familiar vocabulary to online platforms, a sense of urgency and immediacy. And since we were participating in that universe, where images are already circulating, we had to have the same currency,” she says.

The viewing time of Speculations is 30 minutes. With a click of your mouse, you enter intimate spaces without leaving your own. Made in 2015, artist Katyayini Gargi’s animation video, The Reiterators, feels prescient. In apartments, individuals practise the daily absurdities of routine that instil a sense of normalcy in life. A woman does yoga; a couple dances; a young man bathes an elderly man, presumably his father. As a viewer watching from the margins of one’s home, the experience of looking into others’ is at once unsettling and oddly comforting. Other works in the show too—some new, some old—speak directly to this pandemic moment that has lain bare already existing challenges of our country: the precarity of migrant lives, the ongoing ecological disaster, dystopian scenarios and so on.

IN AUGUST 1994, a young British artist named Heath Bunting published phone numbers of all pay phones at London’s King’s Cross station on his newly created webpage Cybercafe.org. The instructions were simple: call a number, let it ring for a few moments, then hang up; or chat with someone; or head to the station and answer the phone. On the assigned day and time, sagging under a cacophony of telephone trills and voices striking up conversations with strangers, the train station transformed into an art gallery. Unsuspecting passengers became an audience in an unusual experiment.

This was the decade of the World Wide Web’s infancy and, perhaps, the genesis of internet art. Bunting, like other artists, found in the sudden apparition of this intangible space, a fertile ground in which to plant seeds of creativity. This ethereal world provided a venue for making the art experience an interactive and accessible one. Like street and installation art movements that had taken flight in earlier decades, the net.art movement too followed the wind outside of the white cube.

More than two decades later, the internet is no longer an unmapped terrain. It is, in this phase especially, letting us come up for air while we hunker down. In early April, Carpe Arte founder Natasha Jeyasingh wondered how to keep alive the monthly tradition of the Art Night Thursday tours she organises of Mumbai galleries that stay open late into the evening.

“My first thought was let’s do Instagram stories where every five to 10 minutes we post work from different galleries. But then a friend said, why don’t you do it on Insta live instead? And then I got thinking, why not do a virtual art night hop where people are also part of the conversation?,” says Jeyasingh.

On the night itself, Jeyasingh remained busy for almost three hours, chatting with artists, curators and directors of various spaces such as Chemould Prescott Road, Akara Art, TARQ, Max Mueller Bhavan and so on. “It was a little stressful. I had to keep shifting the camera from my face to images on my computer and keep the conversation going. But it was a great learning experience,” she says. About 400 viewers logged in.

How do we cope creatively with a sudden yet imminent forced isolation? The Sunaparanta, Goa Centre for the Arts wondered about this and, on March 21st, put out an open call asking artists to weigh in with strategies. Some sent paintings they were doing in their studios about imagined landscapes without human presence, others delivered video bytes in direct response to the sociopolitical announcements then underway. Some others offered ideas for fullfledged projects to run online.

That’s how Sunaparanta’s Surviving Self-Quarantine series was born. Each of the works, scattered across the gallery’s social media feeds, reflects on this strange slice in time.

For one such project, artist Pallavi Paul asked people to send recordings of what they were hearing. How do you measure silence in the absence of noise? What do you hear in the throes of quietude? Today, Sunaparanta’s Instagram and Facebook pages are a symphony of sounds of silence from across the globe: droplets of ice melting in Norway, fish moving around in an aquarium, feet crunching snow, a worm crawling on someone, a clock chiming, church bells ringing.

Exhibitions in India that are a click away
SERENDIPITY ARTS FESTIVAL has launched an online arts festival called SAF 2020 x You
TARQ’s first online exhibition, Resurgence, can be viewed on the TARQ website
SHRINE EMPIRE’s Speculation on a New World Order was conceived specifically for online viewing
MEHLLI GOBHAI’s retrospective can be viewed on Gallery Chemould Prescott Road’s website
KOCHI-MUZIRIS BIENNALE (2012,2014,2016) can be seen on the Google Arts and Culture platform

“The series is interactive. Most are participatory projects where people become part of the process of making of the work. Artists are blurring the lines between artist and audience, maker and receiver. In many cases, the works would not exist without the viewer. This encourages a non-hierarchical approach to art-making,” says Leandre D’Souza, curator and programme director of Sunaparanta.

With public spaces not likely to open any time soon, virtual exhibitions seem like an assured way of engaging with art, going forward. Tasneem Mehta, managing trustee and director of Mumbai’s Dr Bhau Daji Lad City Museum, sees in this forced shift a possibility of veritable intellectual exchanges across countries. “There are bound to be issues of transportation of art soon. We will have to curate more and more exhibitions online. This will give us opportunities to break down boundaries between institutions and countries. Hopefully, the situation will open access to enable more engaged online curating,” she says.

And yet, ambling in the multi-dimensional space of a gallery or museum, being drawn viscerally by the texture, depth or colour of an artwork and being guided by the vision of a curator can find no replacement in the virtual world. ‘I want and need that,’ wrote Seph Rodney, in a piece for Hyperallergic in March. ‘Otherwise I wander these landscapes only speaking with myself, slowly losing the meaning and import of language.’

This is undoubtedly true. When you commune with an artwork, you’re also absorbing it in relation to what’s around you, what you can touch and what you know you can’t. When you remove that from the equation, you also remove an essential part of the viewing experience—the quiet murmurs of other visitors, the sweet twang of their shoes against the floor, the varied human presences. No amount of zooming in and out or adjusting brightness can substitute an encounter with art in its flesh—a seemingly solitary activity, but one that’s firmly rooted in community.

Stripped of its elegance and ornament, all art is eventually about ruminating on what it means to be human in a deeply interconnected universe. What’s unfolding around us then, in this world of ours, is the biggest evidence of it. We are staying home, not just for ourselves but also for others. If this is not the greatest piece of solidarity art, what is?