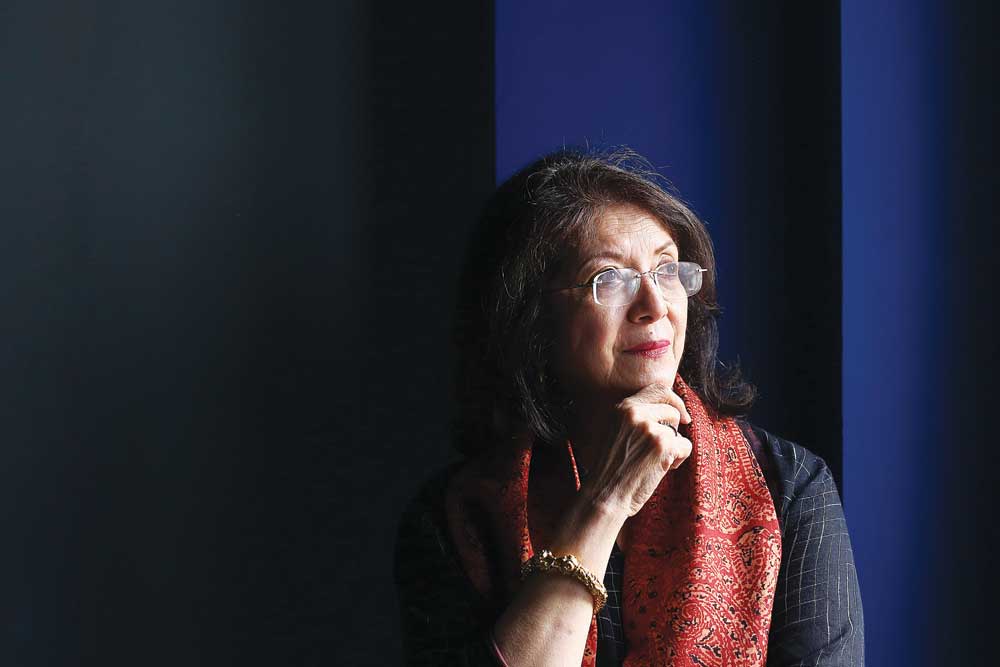 RAKHI SARKAR HAS been in interviews all day promoting the CIMA Art Mela—the annual affordable art sale that her gallery, the Centre of International Modern Art (CIMA), Kolkata, is finally bringing to Delhi. This is the last interview of the day, and she talks with enthusiasm about the need to protect and promote art in India, the role art played in the national movement and the need to return it to the middle-class.

Sarkar is director of the CIMA gallery, which she started in 1993 to serve as a centre within India for international modern art as well as to take Indian modern art to the rest of the world. She’s also the managing trustee and brains behind the long-awaited Kolkata Museum of Modern Art (KMOMA).

Despite this obvious interest in promoting art, one is puzzled by a price chart for the CIMA Art Mela that ranges from Rs 4,000 for a Madhubani to Rs 38,000 for a Paresh Maity watercolour to Rs 68,000 for a Thota Vaikuntam sketch. One is compelled to ask Sarkar how she has pulled this off.

Why the need for an affordable art show?

CIMA usually has large pieces that we use in our travelling exhibitions, and which are unaffordable to the general public as the price of art escalates. But traditionally, the middle-class and the intelligentsia have supported the arts. Till the 19th century, there were wealthy rajas and patrons who would commission art through portraitures and decorations for palaces and temples. But the 20th century was more about secular art and modern art. It needed a different kind of patron. It was the middle-class that stepped in.

The whole thing started from Shantiniketan. The whole modern art movement was started by Abanindranath Tagore, Rabindranath Tagore’s nephew, who founded the Bengal School of Art, which led to the development of modern Indian painting. Rabindranath Tagore collected artworks from artists which he would sell to finance the building of Shantiniketan, and it was being bought by the middle-class intelligentsia, not the rajas and maharajas. He sold lots of artworks in Bombay till Mahatma Gandhi finally told him, “Enough is enough. My friends from Gujarat will sell for you. It’s not your job to sell art and organise exhibitions.”

Suddenly in the mid-90s we found the middle-class weaning off art. They were not being able to see the art. There were no big shows and we don’t have too many museums. The dialogue was shifting, as auction houses and a few galleries started selling at hugely inflated prices which the middle-class couldn’t afford. Those who were buying were buying for investment or the wrong reasons, not love. It was going into vaults, corporate board rooms and some drawing rooms where the works were never seen by the public. The artists got very concerned. They couldn’t see where their artworks were going. The whole thing was warped. So we at CIMA art gallery had discussions with a lot of senior artists like Ganesh Pyne, Jogen Chowdhury, Lalu Prasad Shaw, as well as some young emerging artists, and provide art at a low price, provided it’s not abused. Because it’s very easy to take this cheap art and then hike up the price five times—any gallery would be tempted to do it.

We said fine, but we needed to devise a system so that transparency is maintained for the artist and the gallery. That system is more or less perfected now. All the artists of Bengal came forward— young and old but of course we selected the artworks. We had curatorial control.

What are your criteria for the artworks?

For the Mela, we didn’t bring in dialogues on high art. It was important that the art was fun, jovial while at the same time being impeccable and aesthetically appealing. Of course, some of them had irony, humour, but that wasn’t the only criteria. But we were open for any work that would appeal to someone who was new to buying art. It had to be impeccable quality so that 50 years from now, the artwork would still have pristine value and be appreciated. I have a lot of artworks from the 19th century and the value is high because of the quality. Not a single miniature has the artists’ names on them, but you judge by the quality.

“The Mela is not meant just for people who are regular buyers. It’s also for those who want their first piece of art” – Rakhi Sarkar, director, CIMA

And we have variety—right from funky to the avant-garde to the sentimental to highly figurative to digital prints. We even have traditional art like Madhubani, Gond and Patachitras. All of them are award-winning artists. We try to ensure that all our artists have won some award so that the quality is above reproach. It’s a very cordial, jovial experience at the Mela where different kinds of artworks are placed next to each other and it’s a fun place to encounter art. It’s not meant just for people who know their art and are regular buyers. It’s also for those people who’ve just received their first paycheque and want their first piece of art.

We even had this businessman from Delhi who was visiting Kolkata and saw the advertisement for the Art Mela. He brought along all his relatives and insisted on buying an artwork for them all. You could see that he had never bought art before but that didn’t stop him.

In previous Art Melas in Kolkata, people queued up from 5 am when we open at 11, so they can come and pick their favourite pieces—their stars, as it were. Each artist has only given a limited number of pieces so buyers grab the works they have their eye on. People come from across Kolkata so we have to employ some 25 volunteers over our 20-odd staff members. So, you can see it’s very intense work, but very satisfying.

How do you ensure provenance?

We do our homework. The pieces are authenticated, genuine, weeded out. We are giving you a full guarantee. There are one or two artists who have passed away. We had their works from previous Art Melas and the families gave us permission to sell the works but 99 per cent of the pieces are directly from the artists.

It’s not possible to give a certificate of authenticity for so many pieces since that’s a very expensive process, so each piece has a hologram stamp at the back. We also ask you to keep the receipt we give you on purchase.

Why did you choose Delhi and not, say, Mumbai?

To be honest, a lot of people are buying from Delhi already. Also, we had good connections in Delhi, and better networking with some good galleries here. We have plans to go to Mumbai, Chennai and Bangalore, but we can’t manage more than two Art Melas in a year.

When we started, we had 20 artists. We’ll be bringing over 80 artists to Delhi. Many of them will be local artists. Arpita and Paramjit Singh; Manu and Madhvi Parekh are all giving works, but also many younger artists who’ve won the CIMA Awards. If we had to go to Mumbai we would bring artists from there. And the senior artists give playful works—not like they’d give for art exhibitions. They use the Mela to experiment. They could give us study works that may become a mainstream painting later. For example, Thota Tharani has given us an old series. So we have rare things. Even I collect from the Mela.

What do you do with the money generated?

A part of the funds are used for the Art and Heritage Foundation. This does a lot of large exhibitions. It supports the CIMA Awards that are held once in two years. We also bring together symposiums where art historians speak. We also help in making documentaries and we publish books. Apart from catalogues, we also look at publishing books—that’s one of our constants.

How has CIMA helped make Kolkata one of the leading centres of modern art?

We’ve been involved in lots of symposiums and exhibitions. We’ve also supported lots of exhibitions. We wanted to make Kolkata the headquarters of art in the east. There’s already the India Art Fair in Delhi, Kala Ghoda in the west and the Kochi Biennale in the south. When we get sponsorship, we organise events.

Perhaps our most seminal exhibition was the one we took to London called Chamatkara, which was curated by Dr Siri Gunasinghe, where we looked at art from the 9th Century to modern times. There were 200 artworks and we received around 36,000 visitors over 15 days. There was also Art of Bengal: Past and Present which documented the history of Bengal in three parts since there was no location in Kolkata big enough to carry the whole thing. It then travelled to NGMA in Mumbai.

How do you plan to deal with Delhi’s VIP culture?

The show opens for everyone on the 26th at 5 pm.

CIMA Art Mela, with 80 participating artists, will be held at the Visual Art Gallery, India Habitat Centre from April 26th-30th (10 am-8 pm)