Often criticised as being purely aesthetic, Senaka Senanayake’s positive paintings are by no means emotionally inert 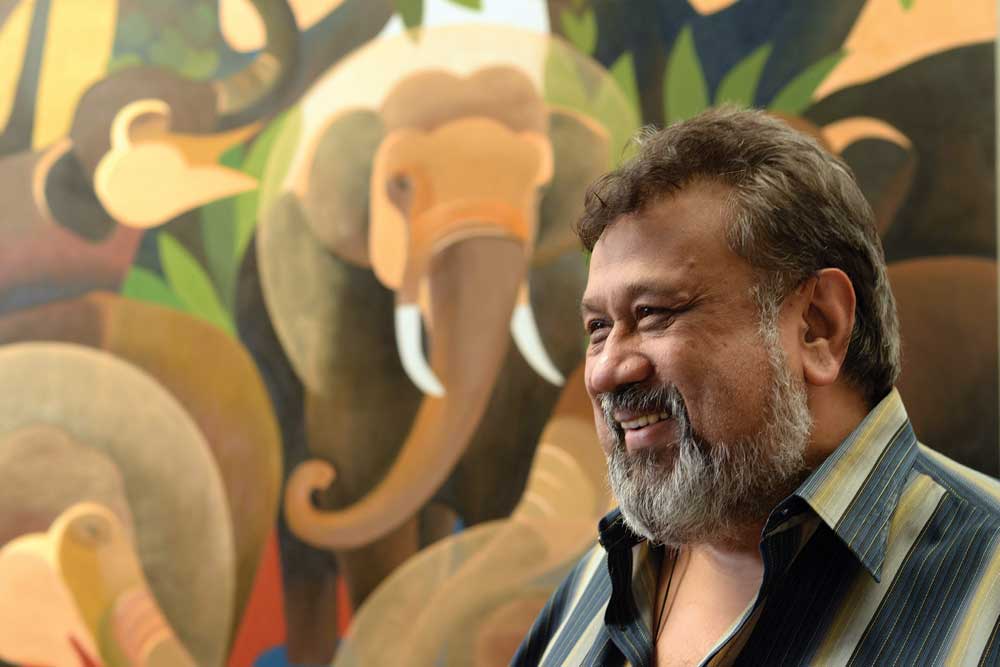 A NEW EXHIBITION by one of Sri Lanka’s best- known artists, Senaka Senanayake, brings a whiff of the tropical rainforest to offset those unseasonably cold Bengaluru evenings. His oils are a Noah’s Ark of the island’s flora and fauna: luxuriant jungle, palm fronds, wildflowers and mushrooms, redolent houseplants, impossibly large butterflies. Their flat, decorative quality seems to evoke Henri Rousseau’s pre- magical realist jungle scenes with their overgrown ferns and eerie sense of stasis. Senanayake’s work, though, is much more upbeat. “I call myself a happy artist,” he says. “I paint natural beauty in all its brightest colours, and I want people who view my art to feel uplifted.” Then, as if in anticipation of a question about the impact of the civil war on his art, he adds: “Every day, when you open the newspapers, they have pages and pages about crime and corruption, but they will never talk about a beautiful sunset.”

Senanayake’s paintings are gorgeously positive, his forests wearing saturated runway colours, his birds right out of an ancient fable. His style is often criticised as being purely aesthetic, but it is by no means emotionally inert. In fact, his work is an ironic reminder of the fading beauty of his world, a hope against hope that whatever is left of nature can be conserved. It is equal parts celebration, elegy and documentation of the fragile rainforests of Sri Lanka. “Sri Lanka has lost 70 per cent of its rainforests. The British colonists who turned them into tea and rubber plantations were very clever. They left a patch of forest within each estate to induce rain, but after Independence, we lost many of these patches too,” says Senanayake, 65, crediting a cousin for sensitising him to ecological issues. “I had never been to a rainforest despite living in Sri Lanka. When I saw the beauty of it, I was dumbstruck, but also worried for future generations. How much of this will they get to see?” From a pottering gardener who occasionally enjoyed painting deer and pelicans, Senanayake transformed almost overnight into an amateur ecologist intrigued by endemic species: medicinal herbs, lilies that can fuse back into the plant, endangered birds.

As a child growing up in a political family in Sri Lanka—he is the grandnephew of the country’s first prime minister—Senanayake was encouraged to pursue art as a hobby while focusing on academics and a “real” career. “I was sort of coached to say that I wanted to become a doctor,” he says. In his mind, there were only two things he wanted to become: a cricketer or an artist. He had been painting since he was seven, and exhibiting across the world. He still remembers his first painting—a giraffe painted in watercolour on a large sheet of brown paper taped to the wall of his classroom. But a formal education had to be had, and his family sent him to Yale University to pursue a course in the fine arts. “An American education made me think about what I really wanted to do,” he says. Back home in Sri Lanka, a worldly-wise Senanayake now painted with renewed confidence. “I experimented with many styles before finding my comfort zone in positive art,” he says. His art graces the walls of the United Nations Headquarters in New York, the White House and the National Geographic Building in Washington DC, the FAO headquarters in Rome, the Berlin State Museum, and many institutions and private collections across the world. He has had shows in practically every country, including India, where his works were seen at the India Art Fair in New Delhi earlier this year.

Senanayake’s work is an ironic reminder of the fading beauty of Sri Lanka’s rainforest, a hope against hope that whatever is left can be conserved

Animals and plants have been a recurring theme, so is the ‘circle of life’ that now manifests as translucent orbs of light in his paintings. It is an essential Buddhist motif, symbolising eternal movement and life energy. Much of his work relies on the cosmic circle for form and fluidity—be it his paintings of a herd of cattle or lotuses in bloom. “I have done some hard-edged paintings, but I tend towards truthful art rather than abstractions,” he says. Senanayake’s colours are often violently beautiful, a reaction to the fast-fading natural beauty around him. “As a child, I would often snorkel in Sri Lanka and there were these beautiful corals and so many fish. Now, with the oceanic warming and changing pH levels, the coral is bleached white and you’d be lucky to see any fish at all,” he says. Embracing duller colours and forms in art is perhaps our way of bracing for a colourless world, a world without rainforests and corals and glaciers. And Senanayake won’t let us. His large, tapestry-like canvases, while not as buzzy as a lot of modern art, exist in a timewarp, revealing a paradise not yet lost to us.