Ravi Agarwal: In the Realm of Nature 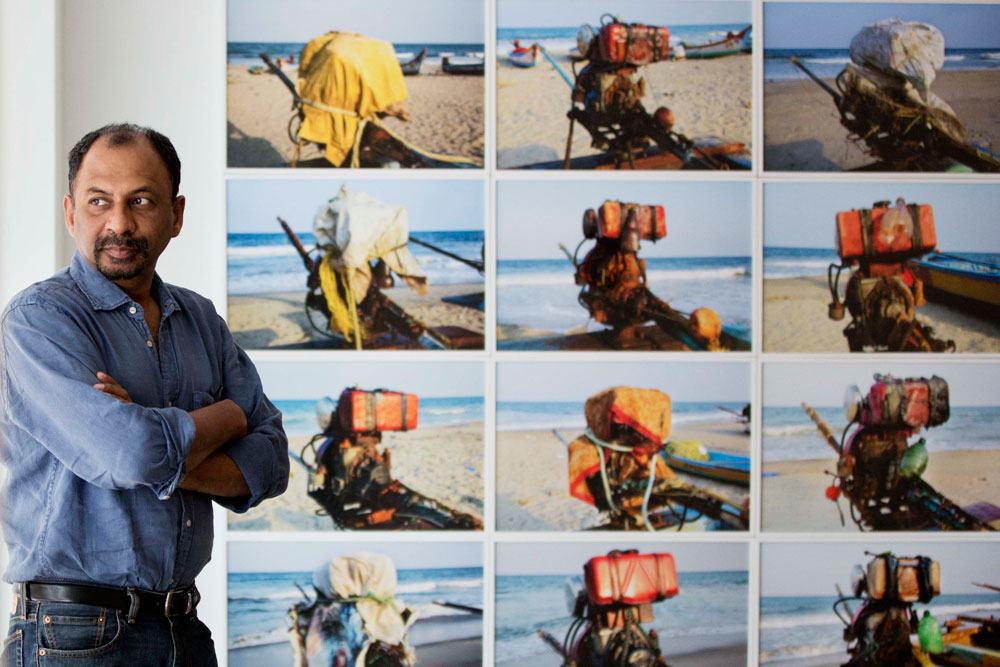 One of the exhibits of Ravi Agarwal’s show Else, All Will Be Still is what could have been a romantic view of a seashore bathed in rosy light, except that it’s problematised by a cacophony of placards scattered across, each with a word inscribed on it. ‘Port’, ‘harbor’, ‘money’, ‘subsidy’, ‘sangam’, ‘diesel’, ‘climate change’, ‘temple’, etcetera—the multiple ways humankind engages with the sea. Titled Rhizome, this exhibition at Gallery Espace represents much of this polyphonic artist-environmentalist’s body of work.

Listening to Agarwal talk about his work is an exercise in immersing oneself in his worlds: there is the world of the photographer documenting human ravages upon nature, the world of the environmental entrepreneur weighing in on climate change, and the world of the artist working out interventions in the artistic space the way he cannot within the policy space. All of these, he insists, come from the same place: a search for alternative imaginings of man’s relationship with nature.

Popular imaginings of that relationship have not been beneficial to the cause of nature, he says. Foremost—and one that he distances himself from—is the view propagated by Romantic poets like Wordsworth and Shelley. The idea of nature as an object to be romanticised, the idea that is it unspoilt, and that man must seek refuge in it to escape his ‘own’ urban life and machines, is also, according to him, the one that distances man from nature. This is an idea argued by philosopher Tim Morton who, in his book Romanticism and the Environmental Subject, writes: ‘By setting up nature as an object ‘over there’—a pristine wilderness beyond all trace of human contact—it re-establishes the very separation it seeks to abolish. We could address this problem by considering the role of subjectivity in nature writing… Instead of looking at the trees, look at the person who looks at the trees.’

Modern privileged society can afford a romantic distance, but not the fishing community, for example, which lives in close proximity and suffers some of its ravages as a matter of daily routine. Agarwal’s documentation of the lives of this community through the eyes of Selvam, in a village near Puducherry in Tamil Nadu, invokes a way of seeing nature that is simultaneously an object of terror, income and beauty. “The way the fisherman knows nature is through his relationship with it. He does not venture outside it. We can afford to romanticise it, but the fisherman cannot. In a sense the aesthetisation and the ability to act on it beyond your immediate self also gives you the power to know it in a way that becomes beneficial for you.”

It is the age of the power of man, the Anthropocene. No one can guarantee future survival

Agarwal recalls asking Selvam if he should venture out into the sea because the sea looked particularly still and calm that day. “He told me that was perhaps the worst day for such an exercise—the days the sea looks calm is when it is at its angriest, most chaotic, underneath the still blue,” says Agarwal. The moment is captured in perhaps one of the sole ‘pretty’ images of the exhibit, ‘The Sea’: a vast ocean of blue, in all shades of turquoise and cerulean, underlined by the uncomfortable truth spelt out by Selvam’s story—beware of the stillness of the sea, it is anything but calm.

The other dominant narrative of man’s relationship with nature, critiqued by Agarwal, is the capitalist-industrial one, which views nature as just another resource to be exploited by mankind. The fact that the planet today is in an ecological crisis, and that nature has been reduced to an object which can only be ‘acted’ upon by being ‘extracted’, ‘admired’, ‘enjoyed’ but not ‘lived’ with, has capitalist roots, believes Agarwal. “Capitalism, technology, mass production, resource exploitation, all have prospered though this positioning. It is the age of the power of man, the Anthropocene. No one can guarantee future survival,” he says.

In contrast to this modern imagining of the relationship, Agarwal brings forth an imagining from ancient Sangam poetry. This ancient form of Tamil poetry dating back to the second century BCE consists of two strands, akam and puram—considered complimentary to each other. While akam depicts the inner life, puram stands for the exterior. “In akam poetry, nature is a reflection of the inner self, with the landscape mirroring the internal landscape of the human self. Five types of land/mind-scapes are alluded to and named after different flowers/trees: kurinci (hills), mullai (pastures), marutam (countryside), neithal (seashore) and palai (wasteland), which correspond to different phases of love, namely the clandestine meeting of lovers, waiting in hope, sulking, pining and separation, respectively. Each of them has their own particular ecosystem populated with special flora, fauna and even water bodies. Neithal, for example, draws its name from the dark water lily,” he adds.

These lyrical landscapes are ominously transplanted onto the brutal world of industrialisation in a series of works called ‘Sangam Engines’, which depict the innards of a boat engine corroded by the ravages of time and tide. While on one hand, the parallels between the lilting lyricism of the Sangam names jar in contrast with the corroded parts of the engine parts, the comment is unmistakable: is this what we do to nature? Is this what we do, in turn, to ourselves?

Capitalism is accused of killing small industry, including the lives and livelihoods of fishermen like Selvam. One of the works shows a torn catamaran which, according to Agarwal, is the anti-thesis of big industry, and its frailty, a symbol of what big industry is doing to small industry. Selvam himself has sworn never to let his children enter the fishing industry and has not even taught them to swim. “His is the last generation of the small nature worker, the small ecological worker. After this, all of us fall into the capitalist machine, where you only share an abstracted relationship with nature,” says Agarwal.

The idea of big capitalists versus small cogs in the machine plays out in several works. One is a portrait of Selvam in his home titled, ‘No One Asked Me’, in which Selvam sits in the centre of his cramped home, talking to his wife with an aggrieved look. The image is transposed on newsprint text: it is an article about loss of land due to the melting of ice caps. The thread is repeated in another work called Coordinates: in which two images face each other. The first, on the left side, is a blurred image from the Paris Climate Change conference, of Obama, Modi and other world leaders waving at the camera. The facing page has a small photo of a fisherman, whose face is hidden. “The small size of the image indicates, naturally, his role in the grand scheme of things, despite the fact that the fisherman has the biggest price to pay in this context. Sometimes, with his life,” says Agarwal.